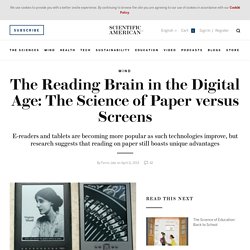 In the following scenes she appears to pinch, swipe and prod the pages of paper magazines as though they too were screens. When nothing happens, she pushes against her leg, confirming that her finger works just fine—or so a title card would have us believe. The girl's father, Jean-Louis Constanza, presents "A Magazine Is an iPad That Does Not Work" as naturalistic observation—a Jane Goodall among the chimps moment—that reveals a generational transition. "Technology codes our minds," he writes in the video's description. "Magazines are now useless and impossible to understand, for digital natives"—that is, for people who have been interacting with digital technologies from a very early age.

Perhaps his daughter really did expect the paper magazines to respond the same way an iPad would. Why teenagers are so resistant to e-readers. There seems to be an idea spouted by many working in the media at the moment, that young people are giving up on traditional media. 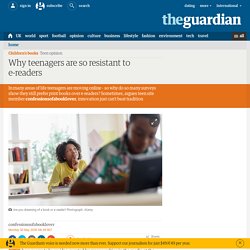 The BBC took BBC Three off our TV screens recently as it moves online to further target that lucrative 16-24 demographic. The BBC Trust claimed that there was “clear public value in moving BBC Three online, as independent evidence shows younger audiences are watching more online and watching less linear TV”. As made evident by their Twitter feed, many in the country have been left slightly confused by this move.

Maybe they’re right to do this, or maybe it’s a mistake. Only time will tell. Books just aren’t the same though. But it’s worth remembering that, against all odds, the sale of physical books is on the up and the sale of digital books is falling. Benefits of Reading Infographic. A Curriculum Staple: Reading Aloud to Teens. Dana Johansen, a teacher at the Greenwich (CT) Academy, reads to eighth graders.Photo courtesy of Greenwich Academy. 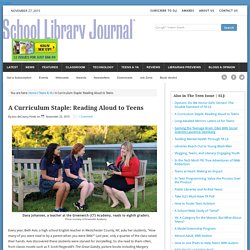 Every year, Beth Aviv, a high school English teacher in Westchester County, NY, asks her students, “How many of you were read to by a parent when you were little?” Last year, only a quarter of the class raised their hands. Aviv discovered these students were starved for storytelling. So she read to them often, from classic novels such as F. Scott Fitzgerald’s The Great Gatsby, picture books including Margery Williams’s The Velveteen Rabbit, and Lynda Blackmon Lowery’s Turning 15 on the Road to Freedom: My Story of the Selma Voting Rights March (Dial, 2015). 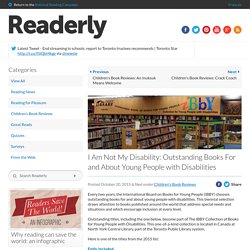 This biennial selection draws attention to books published around the world that address special needs and situations and which encourage inclusion at every level. Outstanding titles, including the one below, become part of The IBBY Collection of Books for Young People with Disabilities. This one-of-a-kind collection is located in Canada at North York Central Library, part of the Toronto Public Library system.

Here is one of the titles from the 2015 list: Emily Included. Why kids still need ‘real books’ to read — and time in school to enjoy them. Nancie Atwell is the renowned founder of the Center for Teaching and Learning, an award-winning non-profit independent K-8 demonstration school in Edgecomb, Maine, where she teaches seventh- and eighth-grade writing, reading and history. 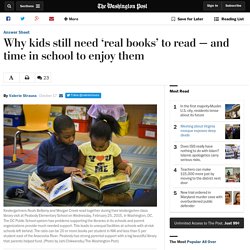 She is the author of numerous books, including the classic “In the Middle: A Lifetime of Learning About Writing, Reading, and Adolescents,” which has inspired teachers for years, and she has won numerous awards, including the first-ever $1 million Global Teacher Prize given earlier this year by the Varkey Foundation. Atwell’s school has a national reputation for its research-based literacy methods which focus on engaging and challenging students while fostering relationships between faculty and parents. A hallmark of the school are the collections of books, carefully selected by adults, from which students can choose. 10 Reasons Nonreaders Don't Read — And How to Change Their Minds. Children are not born with a natural aversion to reading. 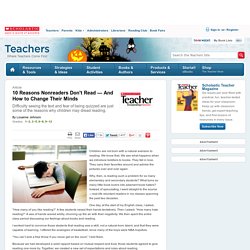 We know that. We see what happens when we introduce toddlers to books. They fall in love. They carry their favorites around and admire the pictures over and over again.