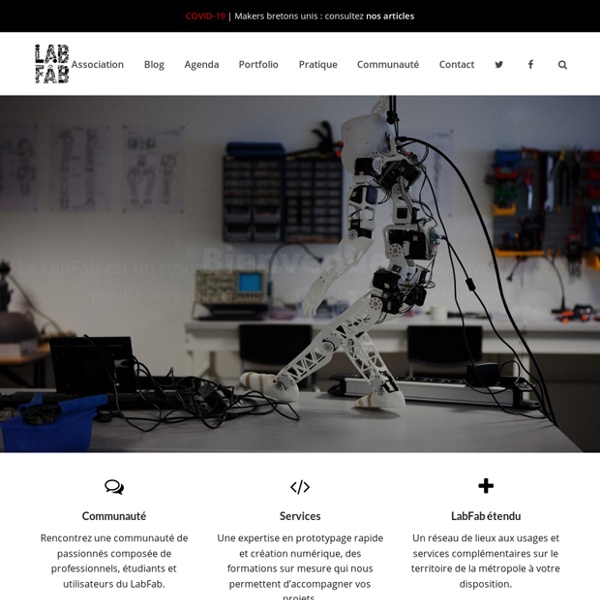 Blog - BiotechLikemind BiotechLikemind is an online community for people interested in biotech and life sciences. It's a place where you can meet, and interact with, bio-entrepreneurs and inventors, investors and industry experts. If you have a biotech idea or question, you can post it as a discussion and get feedback from our community. If you have a patented technology, you can use our platform to do market research and technology valuation. How To Start A Hackerspace November 12, 2012 AT 7:44 am Hi, I’m Eric Michaud. From the first time I visited a Hackerspace, I knew that I had to do everything I could to get Hackerspaces everywhere.

Solutions - Maison Connectée - Technicolor Throughout the world, the connected home is changing how consumers experience entertainment and information. The growth of connected home technology and applications offers NSPs exciting, new business opportunities in their residential and commercial markets. In order to make the most of these opportunities and ease consumer adoption of new services, NSPs must overcome the technological challenges of: Heterogeneous home networksMultiple ecosystems based on different technologies, protocols and standardsMushrooming connected devicesThe explosion of cloud-networking services From A to Z: 200 Essential Resources for Entrepreneurs Building a Business Being an entrepreneur can be difficult. Being an entrepreneur attempting to launch a startup is even more challenging. The good news? You don’t have to go it alone. There are a lot of tools and resources at your fingertips online to help you successfully plan, launch and run your business. And, here are 200 of those essential tools and resources.

Tech Philanthropists Are Giving Away Billions to Build a Better Future They’re often featured as James Bond villains — super-rich megalomaniacs who pour their infinite resources into sophisticated doomsday devices, private rockets for last-minute escapes, and enough high-tech toys to rival the NSA, FBI and CIA combined. It’s easy to vilify the mega-rich, but billionaires and multi-millionaires (on occasion) do some good for society. One class, in particular, could be viewed as a type of Bond anti-villain. About half of the top 50 philanthropist dollars in the United States in 2014 were given by tech entrepreneurs, according to The Chronicle of Philanthropy. Overall, the technology sector gave away $5 billion that year, though their charitable contributions dropped precipitously last year to $1.3 billion (possibly skewed due to the absence of “mega-gifts,” such as a $2 billion donation by the Bill and Melinda Gates Foundation in 2014). Their philanthropy is not just about battling social ills such as AIDS and poverty.

?articles In September 2016, Facebook cofounder and billionaire Mark Zuckerberg and his wife Priscilla Chan announced an exceedingly ambitious plan to “cure, prevent, or manage all diseases by the end of the century.” Zuckerberg and Chan pledged $3 billion to be disbursed by the Chan Zuckerberg Initiative (CZI), the charitable foundation they had launched the year before. With that announcement, the CZI joined the ranks of a handful of other philanthropic mega-donors pumping cash into biomedical research labs. The Bill and Melinda Gates Foundation, for example, has devoted more than $40 billion to research on malaria and other infectious diseases that strike hardest in the developing world, while the Michael J. Fox Foundation has contributed more than $700 million to understanding Parkinson’s disease.