The 100 Most Important Things To Know About Your Character (revised) 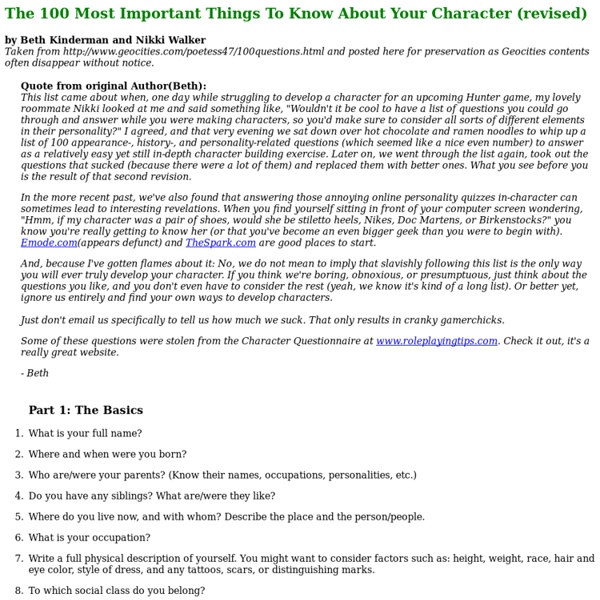 Quote from original Author(Beth):This list came about when, one day while struggling to develop a character for an upcoming Hunter game, my lovely roommate Nikki looked at me and said something like, "Wouldn't it be cool to have a list of questions you could go through and answer while you were making characters, so you'd make sure to consider all sorts of different elements in their personality?" I agreed, and that very evening we sat down over hot chocolate and ramen noodles to whip up a list of 100 appearance-, history-, and personality-related questions (which seemed like a nice even number) to answer as a relatively easy yet still in-depth character building exercise. Later on, we went through the list again, took out the questions that sucked (because there were a lot of them) and replaced them with better ones. What you see before you is the result of that second revision. Just don't email us specifically to tell us how much we suck. That only results in cranky gamerchicks. - Beth

Definition of Third Person Omniscient Definition: Third person omniscient is a method of storytelling in which the narrator knows the thoughts and feelings of all of the characters in the story, as opposed to third person limited, which adheres closely to one character's perspective. Through third person omniscient, a writer may bring to life an entire world of characters. For instance, Anna Karenina is told from multiple points of view. s Citadel: 5 Room Dungeon By JohnnFour Why Do I Like 5 Room Dungeons? This format, or creation method, has a number of advantages: Any location. Though I call them 5 Room Dungeons, they actually apply to any location with five or so areas. They dont have to be fantasy or dungeons. They could take the form of a small space craft, a floor in a business tower, a wing of a mansion, a camp site, a neighbourhood.

The most fashionable characters in literature How we wish we could dress like Holly. Elegant and chic with that black dress and pearl choker. Truman Capote clearly has taste. 5 + 1 Simple Ideas to Make Writing Fun Again Over and over their comments come. “…I hate writing…” “…Please don’t make me write…” “…Writing is soooo boring…”

Write Better Characters The very first novel I, aged 20-something, wrote, is unpublished and will stay that way. An ensemble coming-of-age story of four teenagers, its weaknesses are legion: tame story line, thin action, unimaginatively rendered settings, hackneyed themes (though I will say the dialogue wasn’t bad). Having now published seven novels, I look back on that manuscript and realize that underlying the shortcomings I just mentioned lies its principal flaw: poor character development.

7 Essential Elements of Character Creation Last week Nikki Jefford requested a post on developing characters. There are many different approaches toward developing characters for a story. Last year I wrote a post on different ways to get to know your characters which might help anyone getting started. Adapt or Die: How to Earn Money at Comic Conventions by Fenny Lin Last week, Denise Dorman wrote a blog post, “The Hidden TRUTH About Comic Book Convention Earnings: For Creators, Have Comic Book Conventions JUMPED THE SHARK?” that got cosplayers and con-goers fired up. Since the post came out, there has been a lot of discussions on various boards and FB pages, rebuttals, and voices of support. Because this is a subject that’s near and dear to my heart, I have to jump into the fray and add my two cents as well. To start off, some background on me: I’ve been a vendor at various east coast cons (usually in Artist Alley, but a few times on the main exhibitor’s hall) with my BFF for the past 4 years.

It's Not What They Say... by Mary Cook In fiction writing it's the dialogue that lifts your characters off the page. You must ensure your writing is strong enough for the task. It's not what they say; it's the way they say it Guide to Grammar and Writing Text-only version of this page The Guide to Grammar and Writing is sponsored by the Capital Community College Foundation, a nonprofit 501 c-3 organization that supports scholarships, faculty development, and curriculum innovation. If you feel we have provided something of value and wish to show your appreciation, you can assist the College and its students with a tax-deductible contribution. For more about giving to Capital, write to CCC Foundation, 950 Main Street, Hartford, CT 06103. Phone (860) 906-5102 or email: jmcnamara@ccc.commnet.edu Contributions are tax-deductible to the extent allowed by law. These pages were designed with Cascading Style Sheets and will work best with recent versions of Internet Explorer and Netscape Navigator (6.0+).

Writing a Novel with Unforgettable Characters Character development is one of the first essential steps of writing a novel and it involves creating the people who will carry out your story. There will most likely be a variety of characters needed for your story, but none as important as your lead character – your protagonist. A well-developed protagonist has much to do with the success of writing a novel. Self-Published Authors Helping Other Authors The antagonist or antagonists of a story are often the central driving force to the story or what causes the central driving force to come into being. That being said, a lot of thought has to go into creating an antagonist, especially the central antagonist. In fact, for horror novelists such as myself, it’s often one of the first things we come up with in a story, and what we often use to describe our stories to others (ex. “an evil clown demon terrorizes a small town”, “a cult leader with horrifying dark powers and those who stand against him”, “two children fall through a doorway to a world where the demonic ruler has a terrifying interest in the young boy”).