Awesome pictures from around the world 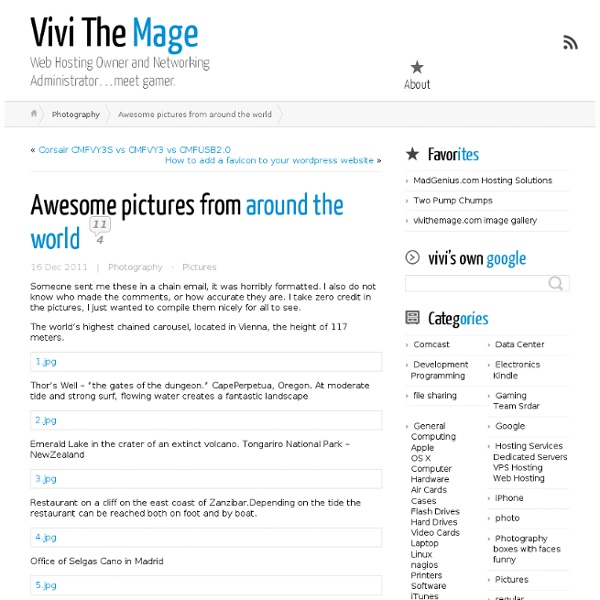 Someone sent me these in a chain email, it was horribly formatted. I also do not know who made the comments, or how accurate they are. I take zero credit in the pictures, I just wanted to compile them nicely for all to see. The world’s highest chained carousel, located in Vienna, the height of 117 meters. Thor’s Well – “the gates of the dungeon.” CapePerpetua, Oregon. Emerald Lake in the crater of an extinct volcano. Restaurant on a cliff on the east coast of Zanzibar.Depending on the tide the restaurant can be reached both on foot and by boat. Office of Selgas Cano in Madrid Desert with Phacelia (Scorpion Weed). Balloons in Cappadocia, Turkey. Dubai. And this is the view down These trees grow in the forest near Gryfino, Poland. The border between Belgium and the Netherlands in a cafe Twice a year in the Gulf of Mexico rays migrate. In the resort town of Skagen you can watch an amazing natural phenomenon. In the Chinese province of Shandong is a bridge across the Gulf of Jiaozhou. Share!

How to Export Lotus Notes Emails to MSG Files: FrizzTech.com Lotus Notes (now referred to as IBM Notes) was once among the most popular email applications used in a variety of organizations. Designed and built for security, Notes is still among the safest and secure email clients in use today. However, it lacks in other departments and hence falls prey to the other popular email clients such as MS Outlook, Thunderbird, Apple Mail, etc. Sometimes, users have a need to convert the Lotus Notes emails into MSG files.

The Top 50 'Pictures of the Day' for 2011 Every day at 5pm the Sifter posts the Picture of the Day. Below you will find a collection of the Sifter’s Top 50 from 2011. It’s hard to imagine the year is almost over, time seems to fly faster each successive year so it’s fun to take a moment and look back at the year that was. Click any of the pictures below to be taken to the individual post to learn more about the photographer and picture taken. Enjoy and stay sifty my friends! A galaxy not so far away: Salt Lake City photographer captures spectacular images of our own Milky Way arched over the pillars and canyons of Utah By Rob Waugh Updated: 17:27 GMT, 7 February 2012 Salt Lake City photographer Royce Bair uses digital cameras and what he describes as a 'copious collection of portable incandescent and flash lighting equipment' to capture his unique views of the night sky over Utah's spectacular canyons. His shots of Wall Street Canyon at Bryce Canyon National Park with the stars of our own galaxy, the Milky Way blazing overhead showcase some of his technique. Bair has been lecturing on night photography for two decades. A photograph of 'Wall Street' canyon at Bryce Canyon National Park on September 20, 2011 in Utah, showing a view across our own galaxy, the Milky Way Stunningly beautiful images capture the glory of the Milky Way taken with a digital camera

Incredible Space Pics from ISS by NASA astronaut Wheelock Go Discovery! It was October 23, 2007 at 11:40am EST when I had my first ride to space on Discovery. She’s beautiful… just sad that this will be her last voyage. Looking forward to climbing aboard the flight deck when Discovery arrives at the Space Station in November. (9-23-2010). Incredible Photos from Space: Larry Tanner, NASA. Why Nikola Tesla was the greatest geek who ever lived Additional notes from the author: If you want to learn more about Tesla, I highly recommend reading Tesla: Man Out of Time Also, this Badass of the week by Ben Thompson is what originally inspired me to write a comic about Tesla. Ben's also got a book out which is packed full of awesome. There's an old movie from the 80s on Netflix Instant Queue right now about Tesla: The Secret of Nikola Tesla. It's corny and full of bad acting, but it paints a fairly accurate depiction of his life. The drunk history of Tesla is quite awesome, too. History.com has a great article about Edison and how his douchebaggery had a chokehold on American cinema.

Efficient techniques to Split PDF Into Different Pages PDF (Portable Document Format), becoming one of the leading file types. Due to its secured and portable nature, these files are very popular for online purposes. Therefore, we should aware of how to do operations of PDF documents. Today, in this article we will be discussing one of the PDF operation i.e PDF split. landscape photography » one big photo Random photo Submit your photo Stumble Thru chimney rock at dusk, colorado Amazing Places To Experience Around The Globe (Part 1) 98 Flares Facebook 13 Twitter 15 Google+ 60 StumbleUpon 0 Pin It Share 10 10 98 Flares × Kayangan Lake, Coron islands, Palawan, Philippines Preachers Rock, Preikestolen, Norway Blue Caves – Zakynthos Island, Greece

Moving slabs [This Dynamic Earth, USGS] The layer of the Earth we live on is broken into a dozen or so rigid slabs (called tectonic plates by geologists) that are moving relative to one another. "Historical perspective" 5 Technological Breakthroughs That Will Change The World In 2019 You might have never been in an era of such rapid technological evolution like this before. In 2019, more is coming your way. The Garter research in 2018 predicted some amazingly big tech trends. The rise of AI, cloud-based computing, and IoT aren’t the only revolutions that made the list.