Understanding Pearl Harbor and the Bombing of Japan 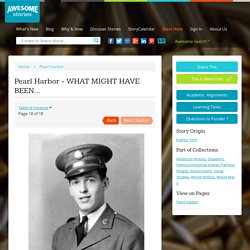 The Lieutenant said that there was nothing to get excited about. Lockard was excited and stated that a large number of planes were “heading fast” towards Oahau: Hey Mac, there is a heck of a big flight of planes coming in and the whole scope is covered. McDonald told Lockard to hold on. Japanese Relocation - U.S. Government Film. The U.S. federal government ordered that Japanese-Americans, living in certain areas throughout the country, had to be relocated to internment camps during World War II. 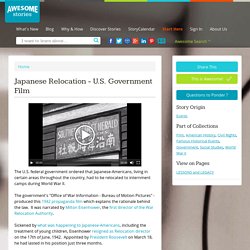 The government's "Office of War Information - Bureau of Motion Pictures" - produced this 1942 propaganda film which explains the rationale behind the law. It was narrated by Milton Eisenhower, the first director of the War Relocation Authority. Sickened by what was happening to Japanese-Americans, including the treatment of young children, Eisenhower resigned as Relocation director on the 17th of June, 1942. Appointed by President Roosevelt on March 18, he had lasted in his position just three months.

Atomic Bomb - Explosion Over Nagasaki. Einstein's Letter - BOMBING OF NAGASAKI. This image appears at page 10 of The Effects of Atomic Bombs on Hiroshima and Nagaski, United States Strategic Bombing Survey (published, in 1946, by the U.S. 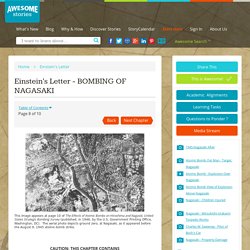 Government Printing Office, Washington, DC). The aerial photo depicts ground zero, at Nagasaki, as it appeared before the August 9, 1945 atomic-bomb strike. As Bock's Car approached the cloud-covered city of Nagasaki on the morning of August 9th, she was running low on fuel. Her crew had originally planned to drop the B-29's payload - a Plutonium 239 bomb dubbed "Fat Man" - on the Japanese city of Kokura. Bad visibility over the primary target caused Bock's Car’s crew to divert to Nagasaki. Although the skies above Nagasaki had been fairly clear earlier in the morning, a front was moving in. 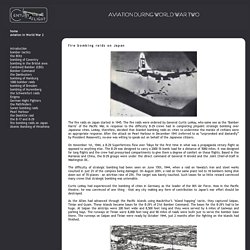 The fire raids were ordered by General Curtis LeMay, who some see as the ‘Bomber Harris’ of the Pacific War, in response to the difficulty B-29 crews had in completing pinpoint strategic bombing over Japanese cities. LeMay, therefore, decided that blanket bombing raids on cities to undermine the morale of civilians were an appropriate response. After the attack on Pearl Harbour in December 1941 (referred to as “unprovoked and dastardly” by President Roosevelt), no-one was willing to speak out on behalf of the Japanese citizens. On November 1st, 1944, a B-29 Superfortress flew over Tokyo for the first time in what was a propaganda victory flight as opposed to anything else. The difficulty of strategic bombing had been seen on June 15th, 1944, when a raid on Yawata’s iron and steel works resulted in just 2% of the complex being damaged.

Not the result of an Atomic Bomb but part of Tokyo as a result of fire bombing. Was it Wrong to Drop the Atom Bomb on Japan? From Dust to Dominance.