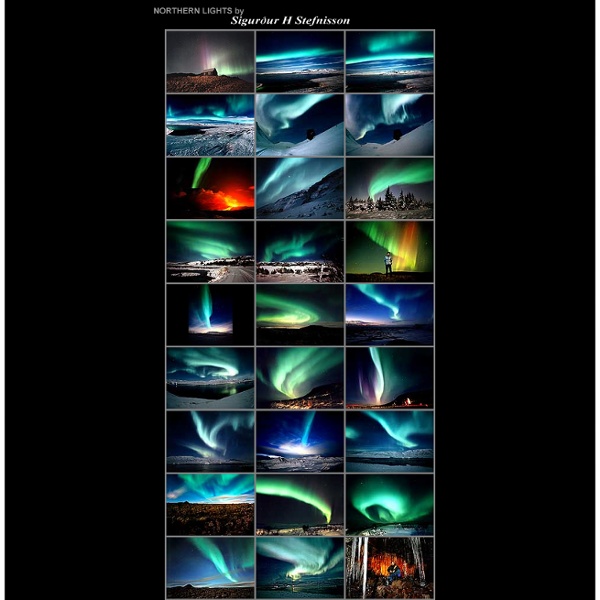 100 Breathtaking Underwater Photos Today we’ll take a closer look on what we can find under the clear blue waters of the oceans or in the pool of your backyard. Animals, plants, humans, sunk objects. All in an artistical view and posture, in underwater scenes. Amazingly Creative Drawing Vs Photography This wonderful work has done by a very talented Belgian painter, illustrator, portraitist, caricaturist and photographer Ben Heine. This creative artist was born in Abidjan, Ivory Coast. He Studied graphic arts and sculpture and I also have a degree in journalism.

Awesome pictures from around the world Someone sent me these in a chain email, it was horribly formatted. I also do not know who made the comments, or how accurate they are. I take zero credit in the pictures, I just wanted to compile them nicely for all to see. The world’s highest chained carousel, located in Vienna, the height of 117 meters. Thor’s Well – “the gates of the dungeon.” CapePerpetua, Oregon. Tunnel of Love Klevan is an urban-type settlement in the Rivne Raion of Rivne Oblast in western Ukraine. Its population is 7,470 as of the 2001 Ukrainian Census. Klevan is accessed via the T1B17 and H22 roads, and is located 28.3 km northwest of Rivne and 50.4 kilometres southeast of Lutsk along the H22. 47 Incredibly Amazing Photographs From The 2010 National Geographic Photography Contest November 22, 2010 | 3 Comments » | Topics: Awesome, compilation, Photography via Boston.com Hot Stories From Around The Web Other Awesome Stories

Beautiful Sunset in Sweden Random photo Submit your photo Stumble Thru landscape photography, nature photography Tags: Book Of Art January 18th, 2011 Books of Art by Isaac Salazar, a simple idea well executed. found at ffffound 25 Bone-Chilling Photos of Abandoned Places Top of the grand stairwell, Brooklyn Navy Yard Hospital, 2008 Though insane asylums, prisons and hospitals wouldn't necessarily be the first places that come to mind when you're thinking about beautiful places to shoot, you might find photographers Ian Ference and Katherine Westerhout there. These two have made it their mission to find beauty in the decrepit, stories in the forgotten and stunning imagery where most would never look. While Ian Ference mostly shoots inside abandoned buildings in New York, Westerhout has shot in everywhere from Philadelphia, Buffalo, and Detroit to Southeast Asia.

Lady Musgrave Island Coral Random photo Submit your photo Stumble Thru landscape photography Tags: 55 incredible examples of photo manipulation We present collection of 55 incredible examples of photo manipulation. Some of them... you may know already, but another ones... could be new for you. What I'm sure about... all of them are simply worth of your attention. The Top 75 'Pictures of the Day' for 2012 *Update: The Top 100 ‘Pictures of the Day’ for 2012 have just been published. Click here to check out the most up-to-date post! After the positive reception from last year’s “Top 50 ‘Pictures of the Day’ for 2011“, the Sifter promised to highlight the top 25 ‘Pictures of the Day‘ at the end of every quarter, eventually culminating in an epic Top 100 for 2012. It’s hard to believe we’re already into the final quarter of 2012. With that, here are the Sifter’s Top 75 ‘Pictures of the Day‘ for this year. If any image really intrigues you, be sure to click the title link or picture itself.

Dog with the Best View Random photo Submit your photo Stumble Thru Yuki Matsueda ‘While most designers are busying adding more and more elements into their artworks, Japan-based Yuki Matsueda has, however, managed to let some elements escape from his art pieces. The result seems quite amazing… A vivid 3D image is successfully created and all the elements are believed to be more shocking than those stay still on paper.’