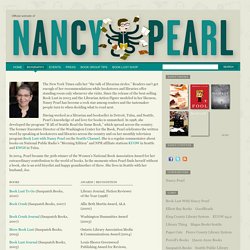 Readers can’t get enough of her recommendations while bookstores and libraries offer standing room only whenever she visits. Since the release of the best-selling Book Lust in 2003 and the Librarian Action Figure modeled in her likeness, Nancy Pearl has become a rock star among readers and the tastemaker people turn to when deciding what to read next. Having worked as a librarian and bookseller in Detroit, Tulsa, and Seattle, Pearl’s knowledge of and love for books is unmatched. In 1998, she developed the program “If All of Seattle Read the Same Book,” which spread across the country. The former Executive Director of the Washington Center for the Book, Pearl celebrates the written word by speaking at bookstores and libraries across the country and on her monthly television program Book Lust with Nancy Pearl on the Seattle Channel. 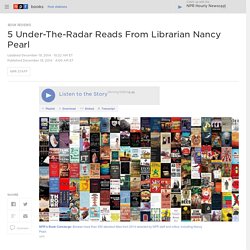 And what a treat for readers this is. It's a fabulously funny satire on Hollywood, on sisterly love, on marriage. ... The main characters in this book are two sisters, Mouse and Mimi. Nancy Pearl (@Nancy_Pearl) Nancy Pearl. Nancy Pearl. Nancy Pearl (born January 12, 1945) is an American librarian, best-selling author, literary critic and was, until August 2004, the Executive Director of the Washington Center for the Book at Seattle Public Library.[1] Her prolific reading and her knowledge of books and literature first made her locally famous in Seattle, Washington, where she regularly appears on public radio recommending books. 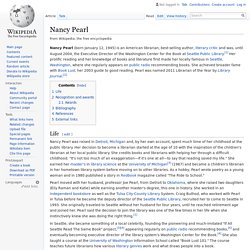 She achieved broader fame with Book Lust, her 2003 guide to good reading. Pearl was named 2011 Librarian of the Year by Library Journal.[2] Life[edit] Nancy Pearl was raised in Detroit, Michigan and, by her own account, spent much time of her childhood at the public library. Her decision to become a librarian started at the age of 10 with the inspiration of the children's librarian at her local public library. In January 2012, Amazon.com announced that it would publish a number of out-of-print titles recommended by Pearl, in a venture called Book Lust Rediscoveries. Recognition and awards[edit] 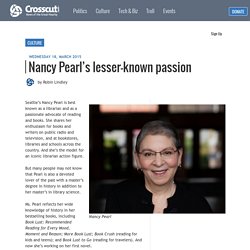 She shares her enthusiasm for books and writers on public radio and television, and at bookstores, libraries and schools across the country. And she’s the model for an iconic librarian action figure. But many people may not know that Pearl is also a devoted lover of the past with a master’s degree in history in addition to her master’s in library science. Ms. Check it Out with Nancy Pearl: Finding that Next Good Book. At the Public Library Association meeting, concluded last week in Philadelphia, Nancy Pearl was doing what she does best—talking about great books and how to connect them with readers. 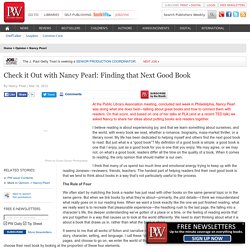 On that score, and based on one of her talks at PLA (and at a recent TED talk) we asked Nancy to share her ideas about putting books and readers together. I believe reading is about experiencing joy, and that we learn something about ourselves, and the world, with every book we read, whether a romance, biography, mass-market thriller, or a literary novel. My life has been dedicated to helping myself and others find the next good book to read. But just what is a “good book”? My definition of a good book is simple: a good book is one that I enjoy, just as a good book for you is one that you enjoy. I think that many of us spend too much time and emotional energy trying to keep up with the reading Joneses—reviewers, friends, teachers. The Rule of Four And why stop at the catalogue? Blurring the Lines. Nancy Pearl. Nancy Pearl’s Love Affair with History: An Interview. Robin Lindley is a Seattle-based writer and attorney, and the features editor of the History News Network (hnn.us). 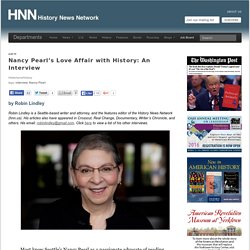 His articles also have appeared in Crosscut, Real Change, Documentary, Writer’s Chronicle, and others. His email: robinlindley@gmail.com. Click here to view a list of his other interviews. On the Shelf with Nancy Pearl : The Childrens Book Review. By Bianca Schulze, The Children’s Book Review Published: January 17, 2013 Nancy PearlNancy Pearl has worked as both a librarian and a bookseller and is the librarian equivalent of Wonder Woman. 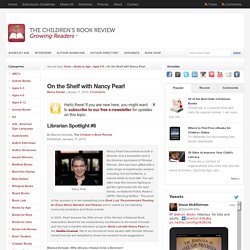 She has been gifted with a wide range of superhuman powers; including, but not limited to, a natural ability to book talk. You can often hear this heroine fighting to get the right books into the right hands, on National Public Radio’s (NPR) “Morning Edition.” The proof of her success is in her bestselling book Book Lust: Recommended Reading for Every Mood, Moment, and Reason and is visible by her standing-room-only bookstore and library events.In 2004, Pearl became the 50th winner of the Women’s National Book Association Award for her extraordinary contribution to the world of books and she has a monthly television program Book Lust with Nancy Pearl on the Seattle Channel.

We’re so honored to have spoken with Wonder Woman herself and we are delighted to share her excellent book suggestions. One Book Projects Grow in Popularity (January 2006) - Library of Congress Information Bulletin. By JOHN Y. 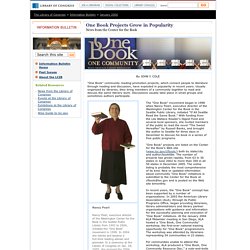 COLE "One Book" community reading promotion projects, which connect people to literature through reading and discussion, have exploded in popularity in recent years. Usually organized by libraries, they bring members of a community together to read and discuss the same literary work. Discussions usually take place in small groups and sometimes authors participate. Seattle’s Nancy Pearl named ‘Librarian of the Year’ Nancy Pearl, Seattle's librarian extraordinaire, has been named the Library Journal's "Librarian of the Year. 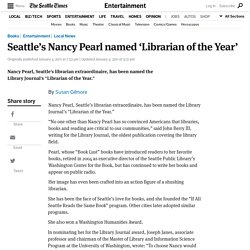 " Nancy Pearl, Seattle’s librarian extraordinaire, has been named the Library Journal’s “Librarian of the Year.” “No one other than Nancy Pearl has so convinced Americans that libraries, books and reading are critical to our communities,” said John Berry III, writing for the Library Journal, the oldest publication covering the library field. Pearl, whose “Book Lust” books have introduced readers to her favorite books, retired in 2004 as executive director of the Seattle Public Library’s Washington Center for the Book, but has continued to write her books and appear on public radio. Her image has even been crafted into an action figure of a shushing librarian. She has been the face of Seattle’s love for books, and she founded the “If All Seattle Reads the Same Book” program. 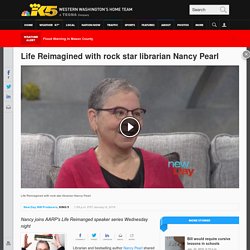 Nancy's Life Reimagined event is Wednesday, November 18 at 6:00 pm at Broadway Performance Hall on the Seattle Central College campus. The event is free, but you must register to reserve a seat. CLICK HERE for more information, or call 1-877-926-8300 Check out some of Nancy's favorite books: Favorite book of all time:The Lonesome Dove by Larry McMurtry Childrens books: Mr. Preschool: Not This Bear by Alyssa Satin Capucilli Mystery: The Cold, Cold Ground by Adrian McKinty Young Adult: The Game of Love and Death by Martha Brockenbrough Biography: On His Own Terms: A Life of Nelson Rockefeller by Richard Norton Smith. Nancy Pearl.