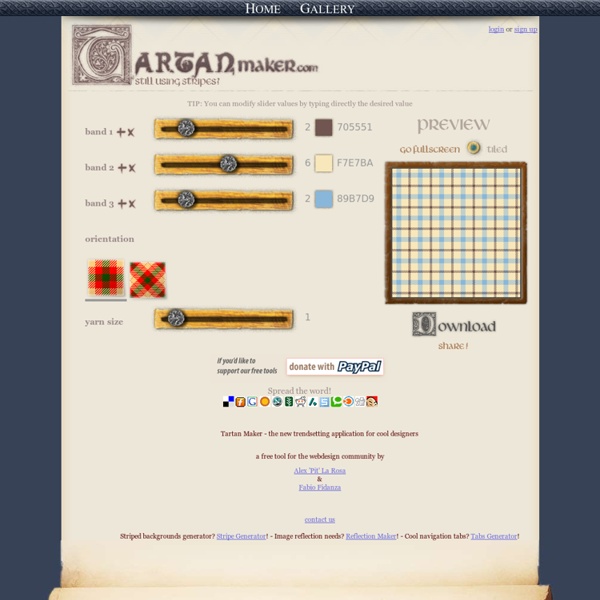 Best resources for free artistic website background textures Web designing has come to the point where designing skills of a designer matters a lot in terms of styling and element placement. If we compare websites built 10 years ago with today’s trend, we will find shocking differences. Background of a website is one of the major elements in today’s designing trend. Web developers should know slicing and image optimization techniques to use classy backgrounds in websites. Even CSS techniques can do a lot with backgrounds in the websites. April 6 - Scotland's Tartan Day Tartan Day Scotland Festival 2014 - 5 to 13 April Tartan Day marks the signing of the Declaration of Arbroath in 1320 at Arbroath Abbey. This historical occasion sowed the seeds of modern day democracy and was used as a basis for the American Declaration of Independence. Tartan Day was inspired by this historical occasion to celebrate all that is good about Scotland - its people, its heritage, its history, its culture and its amazing legacy to the world. The Tartan Day Scotland Festival takes place at the beginning of April each year. The Festival is a programme of very special events which commemorate all that is best about Scotland and the Scots, home and away.

Website Background Patterns Website Background Patterns Posted on October 9th, 2008 under Resources, Webdesign So you’re looking for a new pattern for your website? If you’re not you will be after this post! The History of Scottish Tartan & Clan Tartans, Scotland - UK History If the concept of clan tartans was born at Culloden it wasn't universally known - in that battle there was frequently no way of differentiating friend from foe by the tartan he wore. The only reliable method was to see with what colour ribbon - sprig – a bit of plant - each combatant had adorned his bonnet which, would differ to show the affiliation to ones Clan. This represented in Scottish Heraldry today as a ‘Plant Badge’ that would be worn by a follower to show loyalty to ones Chief. There is a contrary view that this was caused, not by the lack of clan tartans, but by the Highlander's propensity for discarding his cumbersome philamhor (belted plaid) before charging into the fray. After Culloden and the following genocide that occurred throughout the Highlands, the Government was determined to destroy the Clan System and raised an Act of Parliament known as the “The Disarming Act” one of these laws was to make the wearing of tartan a penal offence for the next 36 years until 1782.

Free Website Background Image Generators - Stripe Generator Online Tool Ranjay Mitra • 05/24/10 • 7,650 views • Freeware, Internet, Softwares, Tools • You can create free background images, free background banners, free website buttons with Stripe Generator – a free online tool to generate any type of striped images you want for your website. It is a great free online tool for website designers who are constantly creating new images for web page backgrounds & web buttons. History of the Tartan Introduction Tartan, arguably the best-known cloth in the world, is not peculiar to Scotland, although it has become the country's national costume, occupying a unique place in its history, and in the hearts and minds of millions of Scots. From the times of the early clansmen through to the traditions of the modern Highland regiments, the kilt, plaid and tartan have constituted the unmistakable costume of the Highlander. The dress today remains attractive, distinctive, colourful and martial. It has come to be linked with the virtues of courage and hardiness, with love of an area and with the music, poetry and culture of the Highlands.

Neapolitan Polkadots Background Neapolitan Polkadots Background Tile: yes www.users.zetnet.co.uk/tartan/history.htm Today, books or shops dealing with tartan and Highland Dress will be mainly, if not exclusively, concerned with clan tartans. They may seek to suggest that these are the actual patterns worn by the Scottish clans throughout history up to, and including, the Battle of Culloden in 1746. This is not the case. 400+ Free Photoshop Stripe Patterns Pattern as a background graphics in web design very popular right now and fortunately there are tons of free Photoshop patterns as freebies available on the internet. Working with textures is difficult, but all professional designers global choose this way to add vigor in their designs and to demonstrate their creative skills. In this collection we are show bunch of 400+ free Photoshop stripe patterns for designer’s library.

Scottish Tartans Authority Until relatively recently, it was assumed by most historians, academicsand commentators that tartan was a Johnnie-come-lately . . . a modern invention by rapacious 19th & 20th century weavers and city merchants eager to swell their coffers. Rumours abounded of much earlier origins but it wasn't until American textile archaeologist Elizabeth Barber thoroughly investigated the Mummies of Ürümchi that the real truth emerged - backed up by impeccable archaeological proof. We are greatly indebted to Elizabeth Wayland Barber's fascinating book "The Mummies of Ürümchi" (ISBN 0-393-04521-8) from which we have unashamedly borrowed parts of the text and diagrams. This book is a 'must' for anyone interested in textile history of this area and era. The famous mummies of Egypt appear dry and shrivelled, blackened like discarded walnut husks, compared with these lifelike remains. The bright colours had amazed us and delighted us . . .

250 Polka Dot Patterns and Backgrounds for Web and Print Polka dot patterns have a lot of uses in design, both web and print. In fact, these patterns are usually used for stationary, children’s design, package design or fashion design, among other things. Patterns can even be used as overlay on top of your artwork in Photoshop to add some texture.