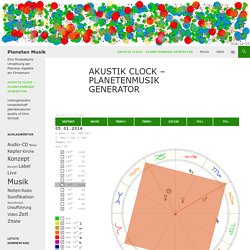 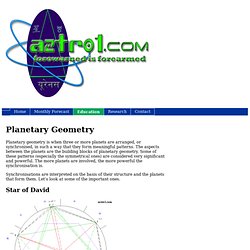 Aspect Patterns Configurations - A useful guide to the gestalt of a chart. When interpreting the aspects formed between two planets in a chart we must make sure to take into account not only the individual aspects in terms of their cyclic representation, but also the interrelationship with all other aspects in the chart. 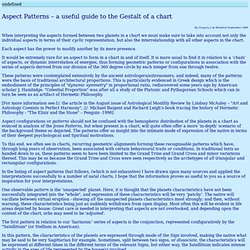 Each aspect has the power to modify another by its mere presence. It would be extremely rare for an aspect to form in a chart in and of itself. Aspect Shapes in the Astrology Birth Chart. You have chart aspect shapes in your chart. 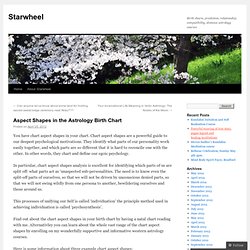 Chart aspect shapes are a powerful guide to our deepest psychological motivations. They identify what parts of our personality work easily together, and which parts are so different that it is hard to reconcile one with the other. In other words, they chart and define our egoic psychology. In particular, chart aspect shapes analysis is excellent for identifying which parts of us are split off: what parts act as ‘unaspected sub-personalities. The need is to know even the split-off parts of ourselves, so that we will not be driven by unconscious denied parts, so that we will not swing wildly from one persona to another, bewildering ourselves and those around us.

This processes of unifying our Self is called ‘individuation’ the principle method used in achieving individuation is called ‘psychosynthesis’. Nothing Is Simple! Figures and Composed Aspects. The 15 major and minor figures with composed aspects This article completes the Figures and Planetary Patterns article which gives an overview of natal charts graphic configurations. 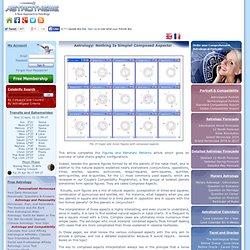 Indeed, besides the general figures formed by all the planets of the natal chart, and in addition to the natural aspects explained nearly everywhere (conjunctions, oppositions, trines, sextiles, squares, quincunxes, sesqui-squares, semi-squares, quintiles, semi-quintiles, and bi-quintiles, for the 11 most commonly used aspects, which are reviewed in our Couple's Compatibility Programme), a few groups of isolated planets sometimes form special figures. They are called Composed Aspects. 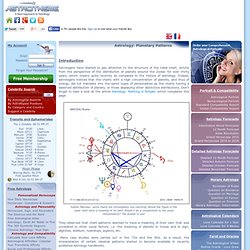 Indeed, astrologers noticed that the charts with a high concentration of planets, and thus of energy, did not translate into the same types of personalities as the charts having a balanced distribution of planets, or those displaying other distinctive distributions. Don't forget to take a look at the article Astrology: Nothing is Simple!

Which completes this page. Sophie Marceau: some charts are immediately eye-catching! Planetary patterns of astrology. When an astrologer looks at your horoscope chart, he or she first sees if there are planets conjunct your "angles" (the ascendant or midheaven, or their opposite points, the descendant and nadir), as well as the chart’s overall pattern. 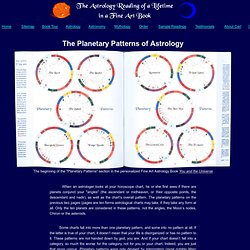 The planetary patterns on the previous two pages (pages are ten forms astrological charts may take, if they take any form at all. Chart Patterns. There’s one last important consideration when looking at the impact of planetary order in a chart, and that’s the shape of the chart itself. 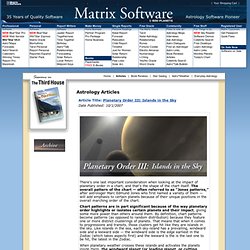 The overall pattern of the chart — often referred to as “Jones patterns,” after astrologer Marc Edmund Jones who first named a variety of them — will add emphasis to certain planets because of their unique positions in the overall marching order of the chart. Chart patterns are in part significant because of the way planetary order highlights or isolates certain planets and their impact, giving some more power than others around them. By definition, chart patterns become patterns (as opposed to random distribution) because they feature one or more distinct clusterings of planets. That means that when it comes to progressions and transits, those clusters get hit like they are islands in the sky.

The seven patterns described by Marc Edmund Jones are idealized, don't quite match every reality. Windward and Leeward. Mixing and Matching. Find your Life Purpose - Uncovering Geometric Planetary Configurations. Yod Aspect Pattern – Astrology King. The Yod Book: Including a Complete Discussion of Unaspected Planets - Karen Hamaker-Zondag. A yod is formed when two planets that are sextile also form an inconjunct to another planet. 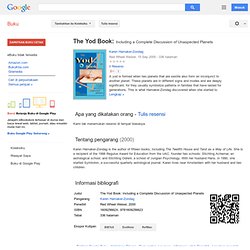 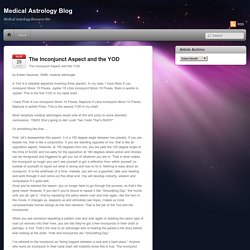 I’ve referred to the inconjunct as “being trapped between a rock and a hard place.” Let me say it another way: You WILL be put into situations, events and experiences where the only thing you can do is be there and become a party to it.