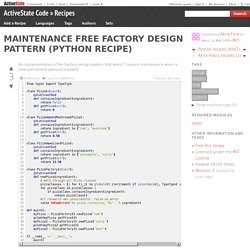 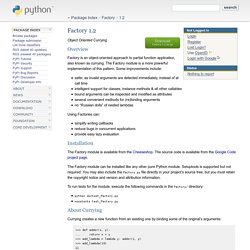 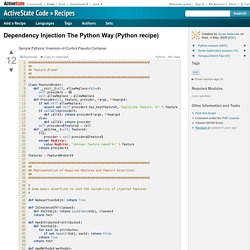 (Perhaps we are facing a sort of "Infection OUT of Control" - IooC? ;) IoC is all about loose coupling between components of an application, about cutting off explicit, direct dependencies, plus some goodies (most of which are useful in statically typed languages only, like automatic type/interface matching). A thorough discussion on the subject can be found at . Yt pydi. Python Design Patterns Guide. Let’s say it again: Python is a high-level programming language with dynamic typing and dynamic binding. 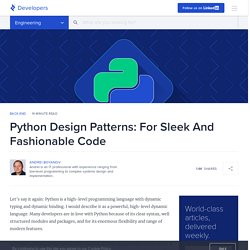 I would describe it as a powerful, high-level dynamic language. Many developers are in love with Python because of its clear syntax, well structured modules and packages, and for its enormous flexibility and range of modern features. In Python, nothing obliges you to write classes and instantiate objects from them. If you don’t need complex structures in your project, you can just write functions. Even better, you can write a flat script for executing some simple and quick task without structuring the code at all. The Pattern Concept — Python 3 Patterns, Recipes and Idioms. “Design patterns help you learn from others’ successes instead of your own failures [1].” 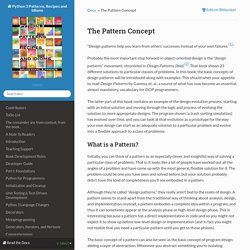 Probably the most important step forward in object-oriented design is the “design patterns” movement, chronicled in Design Patterns (ibid) [2]. That book shows 23 different solutions to particular classes of problems. In this book, the basic concepts of design patterns will be introduced along with examples. This should whet your appetite to read Design Patterns by Gamma, et. al., a source of what has now become an essential, almost mandatory, vocabulary for OOP programmers.

The latter part of this book contains an example of the design evolution process, starting with an initial solution and moving through the logic and process of evolving the solution to more appropriate designs. Python-patterns/borg.py at master · faif/python-patterns. Gdd pydp. DesignPatternsInPython ver0.1. Scaling Python. Originally published in the Advanced Python Newsletter Programs don't automatically scale forever. 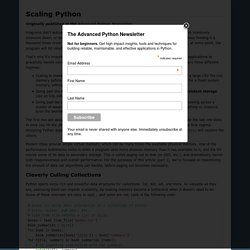 Almost any application that processes data can start to massively slooooow down, or break, or even silently corrupt output and miss events. The Theory of Type Hinting. Guido van Rossum, Dec 19, 2014 (with a few more recent updates) This work is licensed under a Creative Commons Attribution-NonCommercial-ShareAlike 4.0 International License. 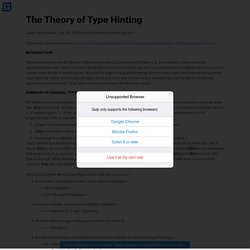 Introduction This document lays out the theory of the new type hinting proposal for Python 3.5. It's not quite a full proposal or specification because there are many details that need to be worked out, but it lays out the theory without which it is hard to discuss more detailed specifications. We start by explaining gradual typing; then we state some conventions and general rules; then we define the new special types (such as Union) that can be used in annotations; and finally we define the approach to generic types. 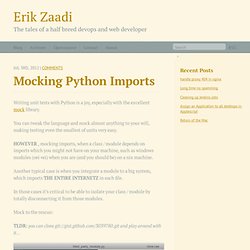 You can tweak the language and mock almost anything to your will, making testing even the smallest of units very easy. HOWEVER , mocking imports, when a class / module depends on imports which you might not have on your machine, such as windows modules (oei vei) when you are (and you should be) on a nix machine. Another typical case is when you integrate a module to a big system, which imports THE ENTIRE INTERNETZ in each file. In those cases it’s critical to be able to isolate your class / module by totally disconnecting it from those modules. 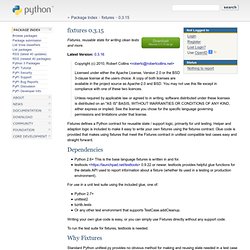 Latest Version: 0.3.16 Copyright (c) 2010, Robert Collins <robertc@robertcollins.net>Licensed under either the Apache License, Version 2.0 or the BSD 3-clause license at the users choice. A copy of both licenses are available in the project source as Apache-2.0 and BSD. You may not use this file except in compliance with one of these two licences.Unless required by applicable law or agreed to in writing, software distributed under these licenses is distributed on an "AS IS" BASIS, WITHOUT WARRANTIES OR CONDITIONS OF ANY KIND, either express or implied. See the license you chose for the specific language governing permissions and limitations under that license. Graham Dumpleton: Transparent object proxies in Python. This is a quick rejoinder to a specific comment made in Armin Ronacher's recent blog post titled 'The Python I Would Like To See'. 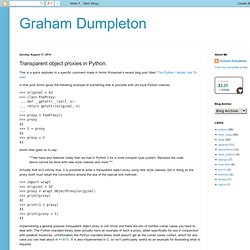 Python author Guido van Rossum Proposals have turned into major language changes for Java lately, and Python is poised to follow suit. Programmer Guido van Rossum, author of the Python programming language, published a proposal on the Python mailing list suggesting that Python should learn from languages such as Haskell and the experimental mypy Python variant’s syntax for function annotations. Mypy, a static Python type checker, finds type errors during compilation when using custom syntax to add type annotations, but the custom syntax is actually valid Python 3 code. “The goal is to make it possible to add type checking annotations to third-party modules (and even to the stdlib) while allowing unaltered execution of the program by the (unmodified) Python 3.5 interpreter,” van Rossum wrote. “The actual type checker will not be integrated with the Python interpreter, and it will not be checked into the CPython repository.” Python and the Singleton Pattern.

The Singleton — Python 3 Patterns, Recipes and Idioms. Possibly the simplest design pattern is the singleton, which is a way to provide one and only one object of a particular type. To accomplish this, you must take control of object creation out of the hands of the programmer. One convenient way to do this is to delegate to a single instance of a private nested inner class: # Singleton/SingletonPattern.py class OnlyOne: class __OnlyOne: def __init__(self, arg): self.val = arg def __str__(self): return repr(self) + self.val instance = None def __init__(self, arg): if not OnlyOne.instance: OnlyOne.instance = OnlyOne. Advanced Design Patterns in Python. The aim of this tutorial is to show off Advanced design structures in Python and the best way to use them. Depending on what you need from a data structure, whether it’s fast lookup, immutability, indexing, etc, you can choose the best data structure for the job and most of the time, you will be combining data structures together to get a logical and easy to understand data model.

Python data structures are very intuitive from a syntax point of view and they offer a large choice of operations. This tutorial tries to put together the most common and useful information about each data structure and offer a guide on when it is best to use one structure or another. Comprehensions If you’ve used Python for very long, you’ve at least heard of list comprehensions. Python decorators finally demystified. Hi there guys! I hope all of you are fine and doing well.

Recently I was hanging out on a python related IRC where I got a request from someone to write an article on decorators in Python. It is perhaps one of the most difficult concept to grasp. 0.5.2. A caching front-end based on the Dogpile lock. Package Documentation Latest Version: 0.5.3. All About Decorators in Python. Hi there fellas. Manuel — Manuel Documentation. Manuel lets you mix and match traditional doctests with custom test syntax.

Several plug-ins are included that provide new test syntax (see Included Functionality ). Understanding Python's "with" statement. Language features - What is the python "with" statement designed for. The Python “with” Statement by Example. Monkey Patching in Python. Metaclasses in Five Minutes. Python metaclasses by example. Python rightfully prides itself as a relatively straightforward language without a lot of "magic" hiding in its workings and features. Sometimes, however, to make interesting abstractions possible, one can dig deep in Python’s more dusty and obscure corners to find language constructs that are a bit more magical than usual. Carl Groner > An Introduction to List Comprehensions in Python. Comprehensions - Dive Into Python 3.

You are here: Home ‣ Dive Into Python 3 ‣ Difficulty level: ♦♦♢♢♢ ❝ Our imagination is stretched to the utmost, not, as in fiction, to imagine things which are not really there, but just to comprehend those things which are. ❞ — Richard Feynman ‣ show table of contents Diving In # Every programming language has that one feature, a complicated thing intentionally made simple. Working With Files And Directories # Python 3 comes with a module called os , which stands for “operating system.” The Current Working Directory # Python: List Comprehensions. 5. Data Structures. This chapter describes some things you’ve learned about already in more detail, and adds some new things as well. Iterators and Generators. Home Contents According to Wikipedia, an iterator is an object which allows a programmer to traverse through all the elements of a collection, regardless of its specific implementation.