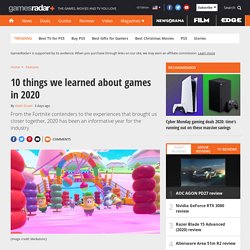 Back in January, nobody could have foreseen how 2020 would play out – the sheer scale, impact and tragedy of the Covid Pandemic has been bewildering. Getting more with less: Six high-yield design patterns. Matthew Emery is a mobile games consultant and the owner of Turbine Games Consulting. 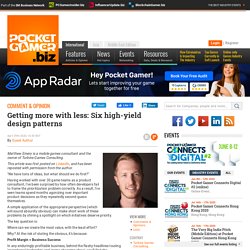 This article was first posted on LinkedIn, and has been reposted with permission from the author. "We have tons of ideas, but what should we do first? " Having worked with over 30 game teams as a product consultant, I've been surprised by how often developers fail to frame the prioritization problem correctly. As a result, I've seen teams spend months agonizing over important product decisions as they repeatedly second-guess themselves. A simple application of the appropriate perspective (which will sound absurdly obvious) can make short work of these problems by shining a spotlight on which initiatives deserve priority.

The key question is: Loopholes in Game Design » devmag.org.za. I had just finished working on my latest card game; I was rather chuffed with it: the rules were elegant and nuanced: there was a wealth of strategies you could use in the game. 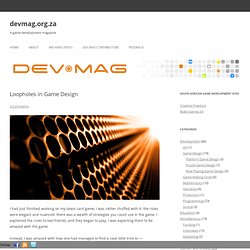 I explained the rules to two friends, and they began to play. I was expecting them to be amazed with the game. Instead, I was amazed with how one had managed to find a neat little trick to — unexpectedly — win the game: a loophole! After the discovery, the game was never the same. Untitled. Start [Level Design Patterns] SoundInGames.com - Sound Design in Games. Start [RPG Design Patterns] Wikidb. Three perspectives on strategy game design. 9 Tips for Indie Game Developers I Learned at GDC 2013 - Tuts+ Rewards and Reward Schedules in Gamification - Andrzej's Blog. Anyone who has read a few of my blogs will, by now, be under the impression that I am not the biggest fan of rewards. 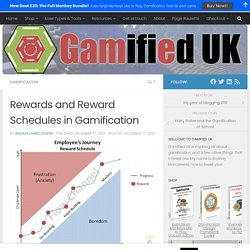 Well, that is not entirely how I feel. Those that have read earlier blogs may remember something I said – “Rewards should recognise achievement, not be the achievement”. I also found myself saying in an email “Gamification at the moment is often nothing more than an attempt to illicit Pavlovian responses to external stimuli”. 5 problems with co-op game design (and possible solutions) If you're making a co-op video game and it feels like an overwhelming task, don't worry -- it's not just you who feels this way. 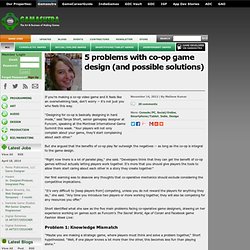 "Designing for co-op is basically designing in hard mode," said Tanya Short, senior gameplay designer at Funcom, speaking at the Montreal International Game Summit this week. "Your players will not only complain about your game, they'll start complaining about each other. " But she argued that the benefits of co-op play far outweigh the negatives -- as long as the co-op is integral to the game design. "Right now there is a lot of parallel play," she said. "Developers think that they can get the benefit of co-op games without actually letting players work together. Her first warning was to disavow any thoughts that co-operative mechanics should exclude considering the competitive implications. "It's very difficult to [keep players from] competing, unless you do not reward the players for anything they do," she said. "You're not the protagonist anymore. 29 Features to Build ANY Table Top Game. HomeBlog 29 Features to Build ANY Table Top Game I've looked through the games I've played, and some others floating around, and worked up a list of 29 features that ou need to support to build pretty much any tabletop game. 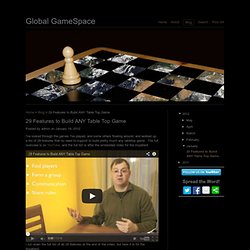 The full overview is on YouTube, and the full list is after the embedded video for the impatient. I run down the full list of all 29 features at the end of the video, but here it is for the impatient: Richard Terrell's Blog - Game Design Dictionary. Richard Terrell's Blog - Game Design Dictionary. Critical-Gaming_glossary_Richard_Terrell.pdf (application/pdf Object) David Perry on Game Design: Game Conventions and Clichés. Boss Design: Tips From A Combat Designer « #AltDevBlogADay. Translate. Art game thoughts re Chain World. At GDC, there was a Game Design Challenge (I’ve participated in one of these, in the distant past!). 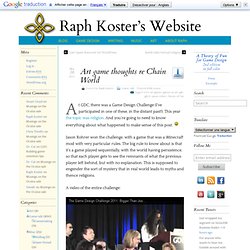 This year the topic was religion. And you’re going to need to know everything about what happened to make sense of this post. Jason Rohrer won the challenge, with a game that was a Minecraft mod with very particular rules. The big rule to know about is that it’s a game played sequentially, with the world having persistence, so that each player gets to see the remnants of what the previous player left behind, but with no explanation.

This is supposed to engender the sort of mystery that in real world leads to myths and thence religions. Driving User Behavior with Game Dynamics. Balance, Part 1: Tao of Picasso « Tish Tosh Tesh. If perfect balance is accurately represented by the Taoist notion of Yin and Yang (ignoring three-faction design, Rock-Paper-Scissors and pretty much any class or skill based system)… Next time, more pictures, Street Fighter, Druids and *gasp*… Color! 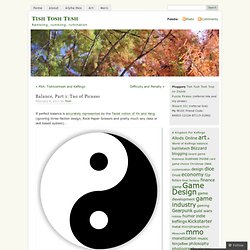 Edited to add the following, to be a bit more informative. Balance, Part 2: Asymmetry and Art « Tish Tosh Tesh. Continued from Part 1, of course… The left and right sides of this diagram are balanced. 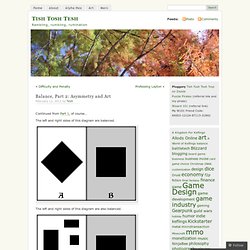 The left and right sides of this diagram are also balanced. These, too. …but what of these? Or these? Balance, Part 3: Systems, Defaults and Munchkins « Tish Tosh Tesh. Balance Part 1: Tao of Picasso Balance Part 2: Asymmetry and Art …and now for something a little more concrete. 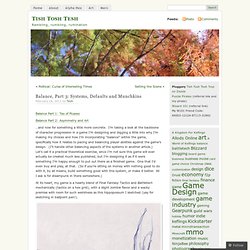 I’m taking a look at the backbone of character progression in a game I’m designing and digging a little into why I’m making my choices and how I’m incorporating “balance” within the game, specifically how it relates to pacing and balancing player abilities against the game’s design. (I’ll handle other balancing aspects of the systems in another article.) Balance, Part 4: Triangles, Trinity and Triage « Tish Tosh Tesh. Balance, Part 1: Tao of Picasso Balance, Part 2: Asymmetry and Art Balance, Part 3: Systems, Defaults and Munchkins Last time, I wrote about what I’m calling the DNA Grid, my tactical RPG’s character advancement system. That happens to be only a part of the system, and stepping back a layer, there’s a triangle that I’m using to give the game’s three major factions flavor and unique functions while trying to give them asymmetrical balance.

It’s at least partially built on the old gaming triangle of Paper-Rock-Scissors. DNA Codex Full. Balance, Part 5: Tick Talk Time « Tish Tosh Tesh. Time is an interesting thing in games. At a very basic level, you usually have the power to pause a game. Some games play with time more explicitly, as the recent Prince of Persia games have. Yet others take time manipulation even further, like Braid‘s suite of time-bending mechanics, or maybe just temporal echoes like The Misadventures of P.

B. Winterbottom. 101 Game Design Principles for Social Media. Game design principles are often incorporated into social media (gamification). The reason is that games are downright addictive. Everything I Learned About Game Design I Learned From Disneyland. As promised, here are the slides from my GDC talk. We had a "sold out" crowd and I got to meet lots of nice people after the talk. Please share these with your friends and co-workers. According to show officials, video and audio will be available after the show.

SCVNGR's Secret Game Mechanics Playdeck. Some companies keep a playbook of product tips, tricks and trade secrets. Game Design, Psychology, Flow, and Mastery - Articles - Fail-safes in Competitive Game Design: A Detailed Example. I'd like to take an in-depth look at an example of designing balance into a game through the use of fail-safes. Game Design, Psychology, Flow, and Mastery - Articles - Slippery Slope and Perpetual Comeback. If a game has slippery slope, it means that falling behind causes you to fall even further behind. For example, imagine that every time your team scored in basketball that the opponent’s team lost a player. In that game, falling behind is doubly bad because each basket counts for score AND it makes the opposing team less able to score points of its own.

The actual game of basketball does not have this screwy feature though, so real basketball does not have slippery slope. Scoring in real basketball puts you closer to winning but does not at all hamper your opponents’ ability to score. Game Design, Psychology, Flow, and Mastery - Articles - Yomi Layer 3: Knowing the Mind of the Opponent. This is not really how Yomi works.Yomi is the Japanese word reading, as in reading the mind of the opponent. If you can condition your enemy to act in a certain way, you can then use his own instincts against him (a concept from the martial art of Judo).

Paramount in the design of competitive games is the guarantee to the player that if he knows what his enemy will do, there is some way to counter it. Game Design, Psychology, Flow, and Mastery - Articles - Rock, Paper, Scissors in Strategy Games. Game Design : The Addiction Element.