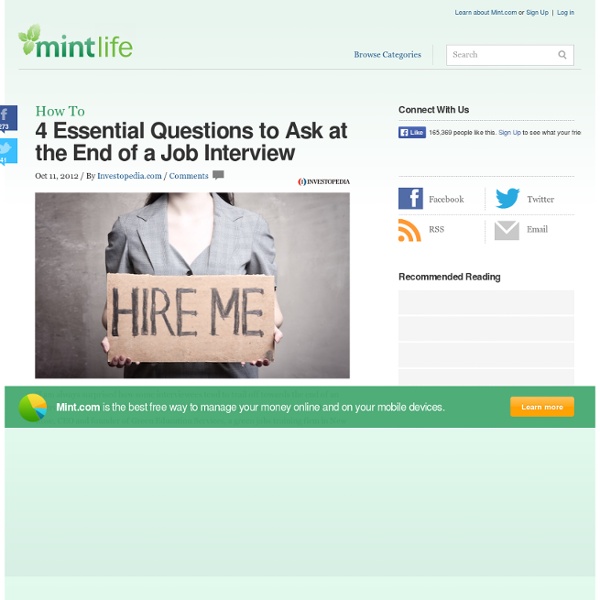 “I am always surprised how some interviewees tend to trail off towards the end of an interview instead of finishing strong and leaving a lasting impression,” says Zachary Rose, CEO and founder of Green Education Services, a green jobs training firm in New York City. Whether you’re a senior preparing for campus recruiting or a recent graduate still hunting for a job, here are the top questions experts recommend asking at the end of a job interview to leave a great final impression on hiring managers and establish yourself as a top candidate. “Is There Any Reason Why You Wouldn’t Hire Me?” Kelsey Meyer, senior vice president of Digital Talent Agents in Columbia, Mo., says, “A recent candidate asked, ‘If you were to not offer the job to me, what would be the reason?’ This was extremely straightforward and a little blunt, but it allowed me to communicate any hesitations I had about the candidate before he left the interview, and he could address them right there.” Michael B. The Bottom Line

100 Ways to Ace an Interview and Interview Questions BusinessMarch 7th, 2011 There is a lot of advice on the internet about preparing for interviews and how to answer specific questions and while much of that is useful, there is not that much content out there that helps with the small behaviors that make a big difference in an interview. I’ve been hiring and interviewing people now for over 5 years and I have paid close attention to the signs that people exhibit in their interviews to reveal what they are really like. Behaviors of a person speak a lot louder than words as it is very hard to change your behaviors on the spot, unlike prepared answers, which are easy to remember and be prepared for. Behaviors will take time to practice, make a much bigger impact and its important to know what behaviors work well in an interview so you can practice them in advance and learn the techniques as habits.

Mayan date political, not about 'end of days' The second known reference in Mayan culture to the alleged 'end of the world' on Dec 21, 2012, has been deciphered, and archaeologists found out that it is actually a reference linked to a politically turbulent period in their history Photo of the Hieroglyphic Staircase 2, Block 5. Photo courtesy of David Stuart / La Corona Archaeological Project MANILA, Philippines - You may now proceed with your New Year's Eve plans on December 31, 2012 - the world isn't really ending, even if you subscribed to that so-called Mayan prophecy.

Shakespeare Insult Kit Shakespeare Insult Kit Since 1996, the origin of this kit was listed as anonymous. It came to me on a piece of paper in the 90's with no attribution, and I thought it would make a cool web page. Though I searched for the origin, I could never find it. Clever Corner DIY Solutions Posted by ScrapHacker.com on tisdag, augusti 28, 2012 · Leave a Comment Let creativity sprawl into each and every corner of your home – literally! Narrow corners are surprisingly often overseen and deemed ”impossible” to make something out of…Challenged by this ‘fact’ (further enforced by the lack of pre-made corner solutions from furniture retailers) I thought I’d gather a bunch of corner D.I.Y ideas proving the ‘corners are impossible’ notion wrong…

5 Things You Must Bring on Your Next Interview Interviewing is both daunting and nerve-wracking. Similar to a first date where you must make a good first impression or suffer the consequences of not getting asked out a second time, a job interview is a high-stakes courtship. The more prepared you are, the more likely you'll tame that bundle of nerves and exude confidence. Preparation, however, is more than a new suit and shiny shoes. In fact, despite the hours you've already invested in researching companies, preparing your resume and applying for jobs, your work is not done. The interview requires additional energy beyond showing up and answering questions.

Why Being In Your 20s Is Awesome I know I talk crap on being a twentysomething but I’m only half-kidding. In actuality, there’s no age I’d rather be. (Besides maybe seven years old because they don’t do anything besides eat ice cream and poop themselves.

2012 March 12 - The Scale of the Universe Interactive Discover the cosmos! Each day a different image or photograph of our fascinating universe is featured, along with a brief explanation written by a professional astronomer. 2012 March 12 100+ Google Tricks That Will Save You Time in School – Eternal Code [via onlinecolleges.net] With classes, homework, and projects–not to mention your social life–time is truly at a premium for you, so why not latch onto the wide world that Google has to offer? From super-effective search tricks to Google hacks specifically for education to tricks and tips for using Gmail, Google Docs, and Google Calendar, these tricks will surely save you some precious time. Search Tricks These search tricks can save you time when researching online for your next project or just to find out what time it is across the world, so start using these right away.