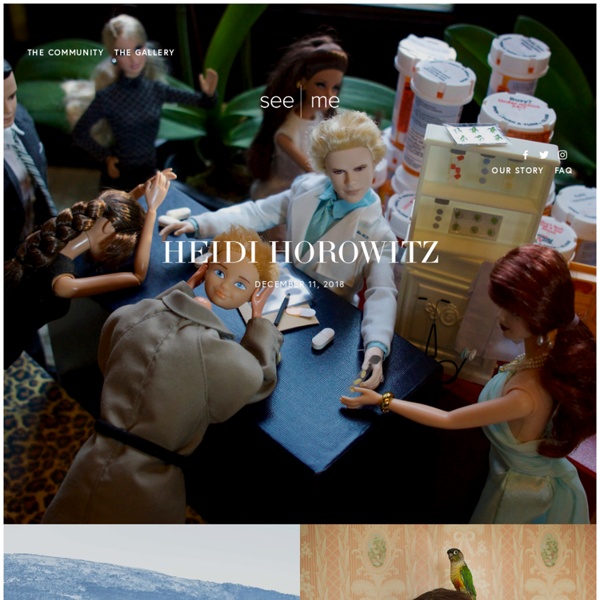 A few years ago I was having dinner in Brooklyn with Jason Goodman, founder of the creative space 3rd Ward. We were talking about the experience of struggling artists. It was something we’d both experienced firsthand, and we wanted to take a new approach to supporting the creative dialogue we are so passionate about. We worked with hundreds of artists in our neighborhood and knew there were millions more around the world with similar needs and ambitions. That night I drew up the idea of a dynamic online community that gives creatives of all types access to tools to promote their work while connecting them with real-world opportunities and financial support. That dream became a plan and, after two years of late nights and bad coffee, that plan became reality in See.Me.

What is Kickstarter 1. Kickstarter is a new way to fund creative projects. We’re a home for everything from films, games, and music to art, design, and technology. Kickstarter is full of projects, big and small, that are brought to life through the direct support of people like you. Since our launch in 2009, 6 million people have pledged $1 billion, funding 60,000 creative projects. RIT Graphic Design Archive "Jacqueline Casey trained at Massachusetts College of Art before working as a fashion illustrator and advertising, editorial and interior designer. In 1955 she joined the Office of Publications (Design Services Office) at Massachusetts Institute of Technology (MIT) working with Muriel Cooper who was then Design Director. Casey's work acknowledges the influence of the Grid established by the post-war graphic design masters in Switzerland. As Director of Design Services many of her posters have been created to publicize exhibitions organized by the MIT Committee on the Visual Arts. She often uses strong elemental imagery, maniupulated by letterforms. Exhibitions of her work have been held at MIT, at the Chelsea School of Art, London (1978) and the London College of Printing. (1980)."

10 Mind-Blowing Theories That Will Change Your Perception of the World Reality is not as obvious and simple as we like to think. Some of the things that we accept as true at face value are notoriously wrong. Scientists and philosophers have made every effort to change our common perceptions of it. Gillian Lambert – Self-Deception Self-Deception is a drawings series of self-portraits by the artist Gillian Lambert. She said she always found something beautiful in things grotesque, repulsive and enigmatic people. In an attempt to explore these connections in relation to her own self-image, she deliberately turned herself in a strange way, unattractive or disgusting ways wich pose the question of what defines physical and traditional notions of beauty. A beautiful work.

Trying Not to Try: How to Cultivate the Paradoxical Art of Spontaneity Through the Chinese Concept of Wu-Wei by Maria Popova “Our modern conception of human excellence is too often impoverished, cold, and bloodless. Success does not always come from thinking more rigorously or striving harder.” “The best way to get approval is not to need it,” Hugh MacLeod memorably counseled. installations, Sense Spaces One of the greatest advances in nanoscience was a paradigm shift in understanding that access and control of the nanoworld is possible through tactile feeling sensors as opposed to lens based viewing microscopes. Like brail on the atomic scale, this method of reading through feeling shifts the perceptual focus of science from image saturation to the subtly of touch. Non-visual, "feeling" spaces provide transitions between the highly immersive central Cell and the other installations. Subtle changes in textile environment and pulsed soundscapes provoke the visitor to "feel" the way into and away from the Cell. Within the sense spaces, keywords about nanoscience echo through the tunnel.

Love Undetectable: Andrew Sullivan on Why Friendship Is a Greater Gift Than Romantic Love by Maria Popova Reflections on the cornerstone of our flourishing. “A principal fruit of friendship,” Francis Bacon observed, “is the ease and discharge of the fulness and swellings of the heart, which passions of all kinds do cause and induce.” Thoreau would “sometimes awake in the night and think of friendship and its possibilities.” How to install OS X 10.9 Mavericks on your PC with myHack This week, Apple publicly released the newest iteration of its Mac OS X operating system, OS X 10.9 Mavericks. Fortunately, Mavericks is just as Hackintosh-compatible as all previous iterations of Mac OS X; Conti released a Mavericks-compatible version of his myHack installation tool within days of the official Apple announcement. If you're interesting in running OS X Mavericks on your PC, it's actually pretty straightforward to set up with myHack. LAST UPDATED ON: November 4, 2013 Requirements: A compatible computer: Not every computer will work with Mac OS X, even with the help of myHack.

Popular Lies About Graphic Design by Craig Ward New York-based Craig Ward is an award-winning designer (multiple times over), as well as a TED speaker, and he’s compiled his years of design knowledge into the upcoming book, Popular Lies About Graphic Design. There are no hard and fast rules with design, although some people would like you to think that there are, so Ward has taken on the task of clearing up the misconceptions. If you’ve ever spent time doing graphic design, the topics will definitely register with you. The book will offer you insight and perhaps, will make you think about design in a different way. It’s currently available for pre-order here.

If You Don't Stop Doing These, You'll Waste the Rest of Your Life The modern world is fast paced and time often seems to slip by with us barely noticing. It’s for that reason that it’s important that we don’t spend time or attention on things that are frivolous, negative or just plan stupid. Check out our comprehensive guide to things you shouldn’t be wasting your time on, and see if there’s anything on this guide that you can cut out of your life. 1. Putting Makeup on for the gym and sports