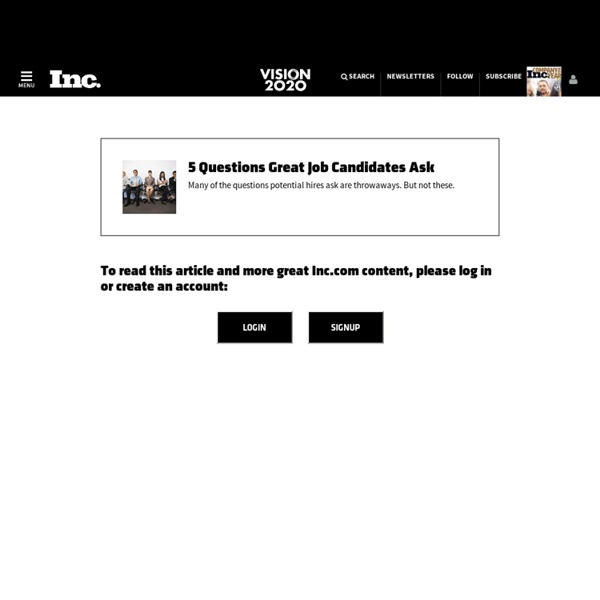 Be honest. Raise your hand if you feel the part of the job interview where you ask the candidate, "Do you have any questions for me?" is almost always a waste of time. Thought so. The problem is most candidates don't actually care about your answers; they just hope to make themselves look good by asking "smart" questions. To them, what they ask is more important than how you answer. Great candidates ask questions they want answered because they're evaluating you, your company--and whether they really want to work for you. Here are five questions great candidates ask: What do you expect me to accomplish in the first 60 to 90 days? Great candidates want to hit the ground running. They want to make a difference--right away. What are the common attributes of your top performers? Great candidates also want to be great long-term employees. Maybe your top performers work longer hours. What are a few things that really drive results for the company? What do employees do in their spare time?

The 5 Traits of High-Potential Employees As your company grows too big for you to do everything--the way you do now--you're going to give over some of the leadership. (Relax. This is a good thing!) For reasons of staff morale, economy, and your own precious peace of mind, it’s better to find your new generation of leaders inside the company. But there’s a rub. Not every longtime loyal employee is really suited to be a leader.

10 Programming Languages You Probably Never Heard Of Okay – you know your variables and you know you declarations. You can write something more advanced than ‘Hello World’. But if you think that you know every programming logic in the world, think again. Programming and logic co-exist…one is a Siamese twin of the other. 88 Pct IIT-B Students Claim Professors Are Incompetent By SiliconIndia | Tuesday, 09 April 2013, 06:12 Hrs Bangalore: Approximately 88 percent students of the Indian Institute of Technology- Bombay claim that the reason behind their poor performance is the inefficiency of their professors to generate interest in the course, reported Yogita Rao of TNN. Dejected with the lack luster performance, a group of IITians from the current batch carried out a survey on the campus.

10 Business Clichés That Prove You're Lazy Whipping out a platitude isn't just annoying. Using some platitudes also shows you're lazy--and not just in words but in actions: "Work smarter, not harder." Hiring: 9 Things You Wish Job Candidates Knew Job candidates say a lot during an interview. As the interviewer, so do you. But there's a lot you wish you could say to job candidates well before the interview ever takes place: What employees really need at work By Padmasree Warrior, contributor FORTUNE -- In 1943, psychologist Abraham Maslow introduced the concept now known as "The Hierarchy of Needs" in which he outlined how people are motivated to fulfill certain basic needs (food, water, safety) before moving on to other, more advanced needs, such as creativity and self-actualization. If we use that lens to look at our businesses, what are the needs of the modern employee?

7 Free E-Books and Tutorials for Learning and Mastering Node.js OK, we won't bore you by telling you what Node.js is again or why it's so dang hot. You want to learn Node.js? There's no completely finished Node.js book out there that we're aware of. If You Haven't Worked for a Failing Company, Here's What You're Missing If you've never worked for a floundering company, you don't know what you're missing. I'm serious. Nothing will prepare you better to lead. And nothing will prepare you better for life. I've worked for a number of companies that, at one time or another, found themselves on the ropes and, you know what?

Keep Your Brain Innovative: 8 Ways For many years, I have had the privilege of leading groups of family members, friends, colleagues, and clients to Africa. We do volunteer work for the Kenyan Children Foundation; we dig, scrub, build, teach, and--at all times--give as much love as possible to the AIDS children the Foundation serves. Every evening, no matter how late it is, our group convenes to discuss our day. This is not a vacation. Investing in a sustainable future - FT Conference in New York At the Financial Times’ (FT) “Investing in a Sustainable Future” conference in New York, UBS’s industry leading expertise in sustainable performance was on display as Erika Karp and Mark Sloss were among lead panelists discussing how to measure and reward sustainable performance. Topics included the downside of rewarding short-term performance in the financial sector and executive pay linked to financial markets performance, and why the fastest-growing data pages on Bloomberg terminals these days are the CSR pages. Erika Karp, Global head of Sector Research, UBS Investment Bank. “The fact that client demand for CSR data pages on Bloomberg has shown exponential growth, is a clear signal that investment managers want to know - not only as a force for the good, but as a measure of corporate sustainability…For business models, transparency can be transformational."

Career Advice: Keep the Boss Happy My recent column, 8 Core Beliefs of Extraordinary Bosses, drew a flood of responses. But there's one thing I didn't mention: An extraordinary boss communicates his expectations clearly to his team. That way, everyone understands what it will take to make your company succeed. With that in mind: If you are the boss, you'll want to share this column with your team, because it will make your job a heck of a lot easier.

How Asus designed the Google Nexus 7 in four months Asus has taken the unusual step to send us a full Q&A document on its involvement with the Google Nexus 7 tablet, lifting the lid on the design and collaboration process with Google. The document provides fascinating insight into the design process behind the Nexus 7 – incredibly the idea for the device was only born in January. "At CES 2012, the executives of Google and Asus met up to discuss future cooperative opportunities and the Nexus 7 was born," says Asus in the document. "From the concept in January, the target was to have the device ready in 4 months – a huge challenge, as a normal product design cycle is usually between 6 and 12 months." What Successful People Do With The First Hour Of Their Work Day Remember when you used to have a period at the beginning of every day to think about your schedule, catch up with friends, maybe knock out a few tasks? It was called home room, and it went away after high school. But many successful people schedule themselves a kind of grown-up home room every day. You should too. The first hour of the workday goes a bit differently for Craig Newmark of Craigslist, David Karp of Tumblr, motivational speaker Tony Robbins, career writer (and Fast Company blogger) Brian Tracy, and others, and they’ll tell you it makes a big difference. Here are the first items on their daily to-do list.