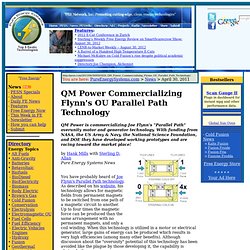 With funding from NASA, the US Army & Navy, the National Science Foundation, and DOE they have developed working prototypes and are racing toward the market place! By Hank Mills with Sterling D. Allan Pure Energy Systems News You have probably heard of Joe Flynn's Parallel Path technology. As described on his website, his technology allows for magnetic fields from permanent magnets to be switched from one path of a magnetic circuit to another. A company named "QM Power" has has acquired all rights to the intellectual property previously owned by Flynn Research. 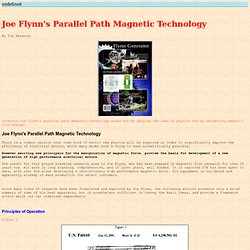 Inventor Joe Flynn's parallel path magnetic technology works not by defying the laws of physics but by extracting magnetic flux energy. Joe Flynn's Parallel Path Magnetic Technology There is a common opinion that some kind of exotic new physics will be required in order to significantly improve the efficiency of electrical motors, while many doubt such a thing is even scientifically possible. However exciting new principals for the manipulation of magnetic force, provide the basis for development of a new generation of high performance electrical motors. The credit for this ground breaking research goes to Joe Flynn, who has been engaged in magnetic flux research for over 25 years now. Since many lines of research have been formulated and explored by Joe Flynn, the following article presents only a brief summary of some of his best apparatus, but is nonetheless sufficient to convey the basic ideas, and provide a framework within which one can undertake experiments. 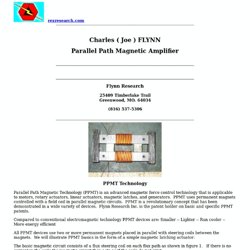 Start with a laminant. The laminates shown came from a transformer I had lying around the shop. Only using straight portion, not E portion. The laminates can also be purchased from several companies. One company I found is Industries International Make sure that you specify that you are looking for ? Place 45 laminants in vice I used ?? Place other end of laminants bar in vice Flip the laminate stack over and mount in the vise again. Tape middle of laminants bar Find the center of the bar and mark it. Then apply 3 more 12? The raised tape area will form an insulated base for the wire winding. Wind bar The winding will use 82? Stop winding the first layer about 1/32" from the end of the winding area. Glue both winding ends to bar The glue keeps the wires from slipping as you apply the next layer Beginning of second layer. Winding finished Winding finished, close-up. Magnet Between Wound Bars Magnets wrapped with tape to keep them together.