How to Answer The 64 Toughest Interview Questions 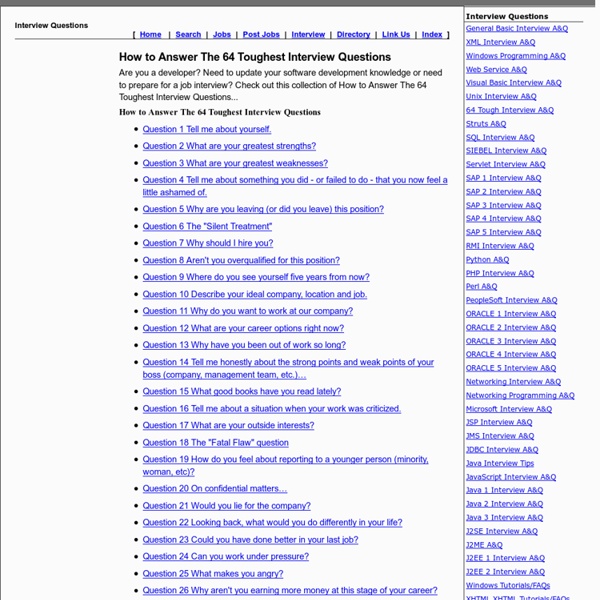 100 Ways to Ace an Interview and Interview Questions BusinessMarch 7th, 2011 There is a lot of advice on the internet about preparing for interviews and how to answer specific questions and while much of that is useful, there is not that much content out there that helps with the small behaviors that make a big difference in an interview. I’ve been hiring and interviewing people now for over 5 years and I have paid close attention to the signs that people exhibit in their interviews to reveal what they are really like. Behaviors of a person speak a lot louder than words as it is very hard to change your behaviors on the spot, unlike prepared answers, which are easy to remember and be prepared for. Behaviors will take time to practice, make a much bigger impact and its important to know what behaviors work well in an interview so you can practice them in advance and learn the techniques as habits.

Survival Tips from 100 Years Ago (Before It's News) When we’ll have no running water, no hyperactive emergency services, no electricity… we are going to turn back to what people did 100 years ago. Here you’ll find some “little” survival tricks popular in the early 1900’s and (some of them) useful even today. 100 years ago Gallaher Ltd printed a short “How-To” series, with clever hints for emergency situations.

To Work Abroad Successfully, Put Down Roots The Benefits of Becoming a Local By Tim Leffel When most people start thinking about working abroad, they generally fall into one of two camps. Those in the first camp plan on securing a solid job before they go. These people intend to spend anywhere from a summer to several years in a foreign place, with a relatively set idea of how they will spend their workdays. The other camp is made up of floaters, those trying to pick up travel funds that will allow the journey to continue. 4 Essential Questions to Ask at the End of a Job Interview “I am always surprised how some interviewees tend to trail off towards the end of an interview instead of finishing strong and leaving a lasting impression,” says Zachary Rose, CEO and founder of Green Education Services, a green jobs training firm in New York City. Whether you’re a senior preparing for campus recruiting or a recent graduate still hunting for a job, here are the top questions experts recommend asking at the end of a job interview to leave a great final impression on hiring managers and establish yourself as a top candidate. “Is There Any Reason Why You Wouldn’t Hire Me?” Kelsey Meyer, senior vice president of Digital Talent Agents in Columbia, Mo., says, “A recent candidate asked, ‘If you were to not offer the job to me, what would be the reason?’ This was extremely straightforward and a little blunt, but it allowed me to communicate any hesitations I had about the candidate before he left the interview, and he could address them right there.”

Government Jobs About 2 million people are employed in a government job, making the federal government America's largest employer. Only 10% of these workers are located in Washington, D.C., the rest work in federal government jobs throughout the United States and overseas. Government employees are hired in just about every career field and in a wide variety of occupations. Government Salary and Benefits How to Answer the Top 35 Interview Questions This infographic (from Sample Questionaire) lists the top 35 most asked interview questions, and how to answer them! How many of these have you been asked? Let us know in the comments below! Highlights: Are you a team player? This needs a firm YES!

Retire to Australia for the Comforts of Home If you retire to Australia, you’ll find yourself in a country with an economy and lifestyle comparable to that of the United States, making the transition to foreign soil that much easier. However, Australia has a lot to offer in several areas regarding quality of life that even the United States has trouble maintaining in the most desirable areas. The land ‘Down Under’ is a modern, rich nation that is full of beauty with a number of its own natural resources, and a variety of climates tog choose from when you are picking out your home. Unlike the United States, Australia has no problem with population density. 5 Things You Must Bring on Your Next Interview Interviewing is both daunting and nerve-wracking. Similar to a first date where you must make a good first impression or suffer the consequences of not getting asked out a second time, a job interview is a high-stakes courtship. The more prepared you are, the more likely you'll tame that bundle of nerves and exude confidence. Preparation, however, is more than a new suit and shiny shoes. In fact, despite the hours you've already invested in researching companies, preparing your resume and applying for jobs, your work is not done. The interview requires additional energy beyond showing up and answering questions.