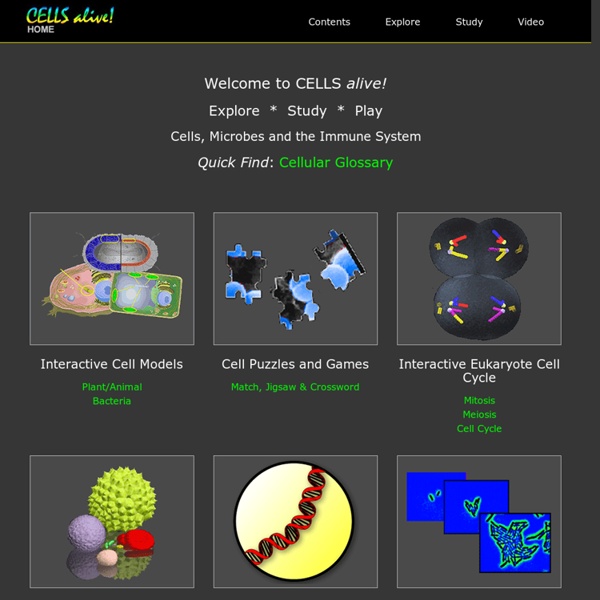 Learn Biology Online For Free with our Huge Collection of Open Courses If you’ve always been interested to learn more about nature and the diversity of life, you can now Learn Biology Online for Free! Free Biology courses are easy to find yet some of the ones you find may not be worth your time. We’ve put together a list of Biology courses from well-respected institutions such as John Hopkins, Yale, MIT, Stanford, and UCLA. The PCR Method - a DNA Copying Machine Lists of Nobel Prizes and Laureates The PCR Method - a DNA Copying Machine Play the Eye of the Donkey Game About the game PCR is a method by which a few fragments of DNA can be duplicated into millions in a couple of hours.

Would You Eat That? The Game of Naming What's in What You Eat Getting the most out of what you eat takes knowing what's in your food. While packaged and prepared food can save time, it takes a lot of chemistry to keep those items edible on the long trip from the factory to your face. Do you know what is actually in some of your favorite food? Play "Would You Eat That?" and you'll be challenged to identify ingredients in some of your favorite foods. Artificial pancreas gives girl a vacation from diabetes Juvenile Diabetes Research Foundation funding 13 artificial pancreas trialsIn the future, the device will be the size of a cell phone, attached to a beltAlgorithms determine how much insulin and Glucagon the patient needs Portsmouth, New Hampshire (CNN) -- At 3:30 a.m., Stefany Shaheen awoke to a feeling of uneasiness. Something was not quite right with her daughter, Elle. Creeping into her bedroom, Shaheen removed a lancet from its wrapper and poked her diabetic daughter's finger. Putting the blood onto the testing strip, she saw the results: dangerously low blood sugar.

Chapter 1: An Owner's Guide to the Cell: Inside the Cell - National Institute of General Medical Sciences Chapter 1: An Owner's Guide to the Cell By Alisa Zapp Machalek Welcome! I hope the transformation wasn't too alarming. Diversity "Diversity is not about how we differ. Diversity is about embracing one another's uniqueness." - Ola Joseph "United we stand, divided we fall." - Aesop (620 -560 B.C.) The Cell and its Organelles Lists of Nobel Prizes and Laureates The Cell and its Organelles Play the Incredible Megacell Game About the game An ultracentrifuge is used for separating the organelles in the cell according to their size, shape and density.

How to Extract DNA from Anything Living - StumbleUpon First, you need to find something that contains DNA. Since DNA is the blueprint for life, everything living contains DNA. For this experiment, we like to use green split peas. But there are lots of other DNA sources too, such as: Spinach Chicken liver Strawberries Broccoli