Great Philosophers: Kierkegaard. Kierkegaard: Leap of Faith "The transparency of thought in existence is inwardness. 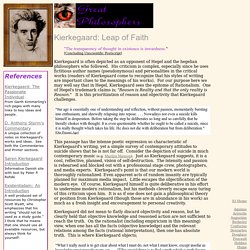 " [Concluding Unscientific Postscript] Kierkegaard is often depicted as an opponent of Hegel and the hegelian philosophers who followed. His criticism is complex, especially since he uses fictitious author names (pseudonymous) and personalities in the critical works (readers of Kierkegaard come to recognize that his styles of writing are important clues to the meanings of his works). For our purpose here we may well say that in Hegel, Kierkegaard sees the epitome of Rationalism. This passage has the intense poetic expression so characteristic of Kierkegaard's writing, yet a simple survey of contemporary attitudes to suicide shows that he is not far off.

Kierkegaard did not mean to flatly discard objectivity and reason, but he clearly held that objective knowledge and reasoned action are not sufficient to reach the truth. One of his famous quotes is; "Truth is subjectivity. " Hermeneutics. 1. 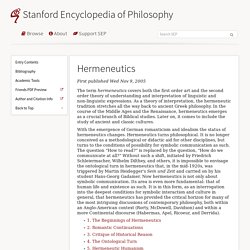 The Beginnings of Hermeneutics The term hermeneutics, a Latinized version of the Greek hermeneutice, has been part of common language from the beginning of the 17th century. Nevertheless, its history stretches back to ancient philosophy. Analytic Philosophy  The school of analytic philosophy has dominated academic philosophy in various regions, most notably Great Britain and the United States, since the early twentieth century. 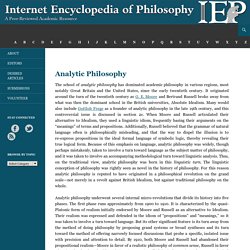 It originated around the turn of the twentieth century as G. E. Moore and Bertrand Russell broke away from what was then the dominant school in the British universities, Absolute Idealism. Many would also include Gottlob Frege as a founder of analytic philosophy in the late 19th century, and this controversial issue is discussed in section 2c. When Moore and Russell articulated their alternative to Idealism, they used a linguistic idiom, frequently basing their arguments on the “meanings” of terms and propositions.

Analytic philosophy underwent several internal micro-revolutions that divide its history into five phases. During the 1960s, criticism from within and without caused the analytic movement to abandon its linguistic form. Wittgenstein, Ludwig  Ludwig Wittgenstein is one of the most influential philosophers of the twentieth century, and regarded by some as the most important since Immanuel Kant. 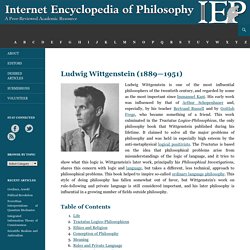 His early work was influenced by that of Arthur Schopenhauer and, especially, by his teacher Bertrand Russell and by Gottlob Frege, who became something of a friend. This work culminated in the Tractatus Logico-Philosophicus, the only philosophy book that Wittgenstein published during his lifetime. It claimed to solve all the major problems of philosophy and was held in especially high esteem by the anti-metaphysical logical positivists. Commentary on Wittgenstein's Philosophical Investigations. Shawver Commentary: This commentary in the pages of this website is not meant to replace your reading of Wittgenstein in the original. 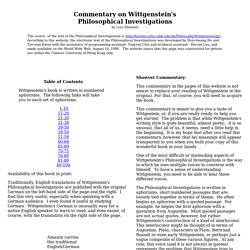 For that, of course, you will need to acquire the book. This commentary is meant to give you a taste of Wittgentein, or, if you are really ready, to help you get started. Tractatus Logico-Philosophicus by Ludwig Wittgenstein. Pragmatism. First published Sat Aug 16, 2008; substantive revision Mon Oct 7, 2013 Pragmatism was a philosophical tradition that originated in the United States around 1870. 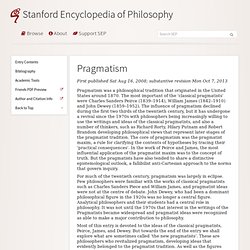 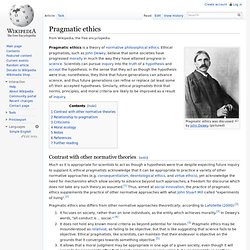 Ethical pragmatists, such as John Dewey, believe that some societies have progressed morally in much the way they have attained progress in science. Scientists can pursue inquiry into the truth of a hypothesis and accept the hypothesis, in the sense that they act as though the hypothesis were true; nonetheless, they think that future generations can advance science, and thus future generations can refine or replace (at least some of) their accepted hypotheses. Similarly, ethical pragmatists think that norms, principles, and moral criteria are likely to be improved as a result of inquiry. Contrast with other normative theories[edit] Pragmatic ethics also differs from other normative approaches theoretically, according to Lafollette (2000):[3] Relationship to pragmatism[edit] Criticisms[edit] Moral ecology[edit] Notes[edit] References[edit] Further reading[edit] 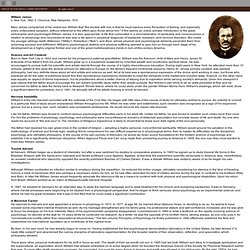 New York, 1842; d. Chocorua, New Hampshire, 1910 Mary James complained of her eldest son William that "the trouble with him is that he must express every fluctuation of feeling, and especially every unfavorable symptom, without reference to the effect upon those about him. " If this seems an overly somatic introduction to the great philosopher and psychologist William James, it is also appropriate: A life that culminated in a reconsideration of spirituality and consciousness in relation to physiology and neuroscience was also a life spent in perpetual diagnosis of backache, eyestrain, and nervous disorders. Science and Art Contend Born in New York City in 1842 and named for his prosperous paternal grandfather, William was the first-born child of Mary and Henry James Sr.

Nervous Instability William's entry into Harvard coincided with the outbreak of the Civil War. Like his father, William was forced to confront serious psychological difficulties early in his adult life. Phenomenology. Rationalism vs. Empiricism. 1. 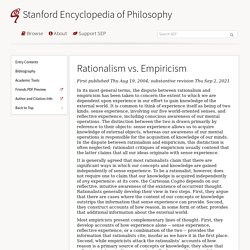 Introduction The dispute between rationalism and empiricism takes place within epistemology, the branch of philosophy devoted to studying the nature, sources and limits of knowledge. The defining questions of epistemology include the following. What is the nature of propositional knowledge, knowledge that a particular proposition about the world is true? To know a proposition, we must believe it and it must be true, but something more is required, something that distinguishes knowledge from a lucky guess. The disagreement between rationalists and empiricists primarily concerns the second question, regarding the sources of our concepts and knowledge. 1.1 Rationalism To be a rationalist is to adopt at least one of three claims.

The Intuition/Deduction Thesis: Some propositions in a particular subject area, S, are knowable by us by intuition alone; still others are knowable by being deduced from intuited propositions. Intuition is a form of rational insight. 1.2 Empiricism. Chart.html. Western Philosophy. Portal:Philosophy/Lists.