Comann Eachdraidh Bharabhais agus Bhrù. Www.gro-scotland.gov.uk/files2/stats/occasional-papers/occ-paper-10-inhabited-islands.pdf. Lochs Area of the Isle of Lewis - Community Web Site - Deserted Steimreway ? A Green Oasis. Eishken Estate booklet to be launched in Orinsay. Grazing and Agrestic Customs of the Outer Hebrides. This paper was written at the request of Lord Napier and Ettrick for the Crofter Royal Commission, over which his Lordship presided. 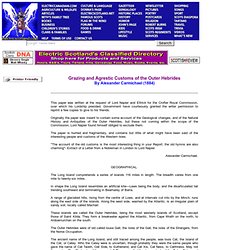 Government have courteously granted the writer permission to reprint a few copies to give to his friends. Calanais Visitor Centre. 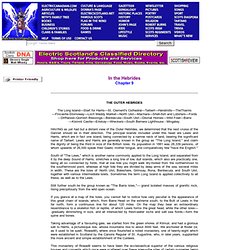 Clement's Csthedral—Tarbert—Handmills—TheThamis—Fincastle-Stornoway—Loch Maddy Market—North Uist—Machara—Shell-fish and Lobsters—Fords—Driftwood--Qornish Blessings—Benbecula---South Uist—Disrnal Homes—Wild Fowl—Barra —Kisinnil Castle—Eriskay—Wreckers---South Bernera Lighthouse - Mingalay. HAVING as yet had but a distant view of the Outer Hebrides, we determined that the next cruise of the Gannet should be in their direction. The principal islands included under this head are Lewis and Harris, which are in fact one island, being connected by a narrow neck of land, bearing the significant name of Tarbert. Machair Life. William MacGillivray. Work The artist as a young man MacGillivray was raised in rural surroundings on the Scottish island of Harris. 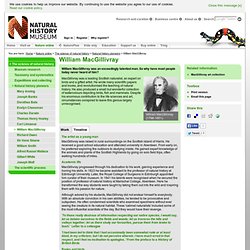 He received a good school education and attended university in Aberdeen. From early on, he preferred exploring the outdoors to studying inside. William MacGillivray. In 1841 he was appointed to the Chair of Natural History in Aberdeen, a city he had once described as ‘being less famed for learned professors than for dried haddock’! 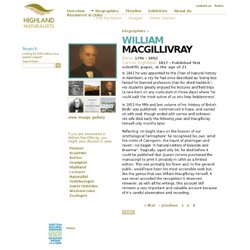 His students greatly enjoyed his lectures and field trips (a rare item on any curriculum in those days) where ‘he could walk the most active of us into limp helplessness’. In 1851 the fifth and last volume of his ‘History of British Birds’ was published, ‘commenced in hope, and carried on with zeal, though ended with sorrow and sickness’. His wife died early the following year and Macgillivray himself only months later. Hebridean Whale and Dolphin Trust. 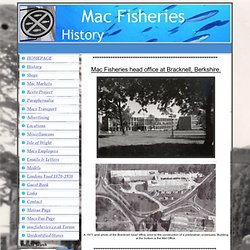 A 1971 ariel photo of the Bracknell head office, prior to the construction of a predestrian underpass. Building at the bottom is the Met Office. Mac Fisheries, its Founders and its Outer Hebrides connections. Information on Widows' Row - News. Your correspondent, M Macaulay of East Kilbride raises the interesting question of the name Widows' Row ('Gazette', April 8). 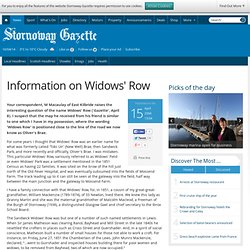 I suspect that the map he received from his friend is similar to one which I have in my possession, where the wording 'Widows Row' is positioned close to the line of the road we now know as Oliver's Brae. For some years I thought that Widows' Row was an earlier name for what was formerly called 'Tobi Uir' (New Well) Brae, then Sandwick Park, and more recently and officially, Oliver's Brae. I was mistaken. This particular Widows' Row, variously referred to as Widows' Field or even Widows' Park was a settlement mentioned in the 1851 Census as having 22 families. The (Made Up) History of Stornoway Weblog. Caves of Scotland Bibliography. On the assumption that nobody except myself, Martin Mills and Alan Jeffreys are interested in references, they were omitted from "The New Caves ofScotland" This more or less halved the number of pages in "The New Caves of Scotland" and of course, halved the price. 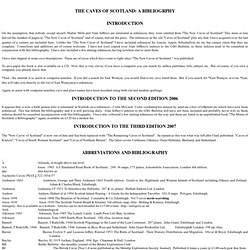 The references in the old "Caves of Scotland" plus any that I have acquired over the last quarter of a century are included here. Unlike the "The New Caves of Scotland" I have included references for Assynt, Appin, Schichallion etc etc but cannot claim that they are complete. Corrections and additions are of course welcome. I have not (yet) copied over Alan Jeffreys's indexes to the GSG Bulletin, so these indexes need to be consulted in conjunction with this bibliography. I have also included a few mining references, having nowhere else to store them. I have also slipped in some cave descriptions. To save paper the book is also available on a CD. *East - the asterisk is to assist in computer searches. Aka also known as L Length. Western Isles - Sites and Monuments Record.

Carmichael Watson Project Blog: Carmichaels in the Census - I. The blog ‘a’ spaidsearachd agus a’ meòrachadh’, by ‘Direcleit’, is a constantly expanding treasure-house of information about the people of the Outer Hebrides in the nineteenth century. 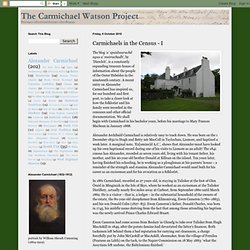 A recent entry on Alexander Carmichael has inspired us, for our hundred and first post, to take a closer look at how the folklorist and his family were recorded in the censuses and other official documentation. We shall begin with Carmichael in his bachelor years, before his marriage to Mary Frances Macbean in January 1868. Alexander Archibald Carmichael is relatively easy to track down. He was born on the 1 December 1832 to Hugh and Betty née MacColl in Taylochan, Lismore, and baptised a week later. A marginal note, ‘Ex[amine]d A.C.’, shows that Alexander must have looked up his own baptismal record during one of his visits to Lismore as an adult! Given his sympathies with the crofting cause, Carmichael’s association with the Camerons appears rather ill-starred. Image:Talisker House. General view of the natural circumstances of those isles, adjacent to the ... - Great Britain. Board of Agriculture, Robert Heron. Whitehall 1212: Jonathan Meades and the Isle of Rust. Our contribution to to the scrap cult, an old Co-op van on the croft. 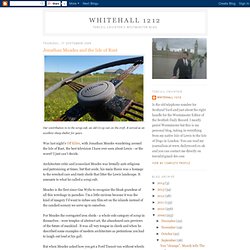 It served as an excellent sheep shelter for years. Was last night's Off Kilter, with Jonathan Meades wandering around the Isle of Rust, the best television I have ever seen about Lewis - or the worst? I just can't decide. Architecture critic and iconoclast Meades was brutally anti-religious and patronising at times, but that aside, his main thesis was a homage to the wrecked cars and rusty sheds that litter the Lewis landscape.

It amounts to what he called a scrap cult. The importance of seaweed across the ages — Biomara. Seaweed has formed a part of the diet of Irish and Scottish coastal dwellers for at least 4,000 years. 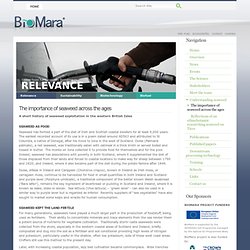 The earliest recorded account of its use is in a poem dated around AD563 and attributed to St Columba, a native of Donegal, after his move to Iona in the west of Scotland. Dulse (Palmaria palmate), a red seaweed, was traditionally eaten with oatmeal in a thick broth or served boiled and tossed in butter. The monks on Iona collected it to provide food for themselves and for the poor.

Indeed, seaweed has associations with poverty in both Scotland, where it supplemented the diet of those displaced from their lands and forced to coastal locations to make way for sheep between 1790 and 1820, and Ireland, where it also became part of the diet during the potato famine after 1846. For many generations, seaweeds have played a much larger part in the production of foodstuff, being used as fertilisers. Later, with increasing coastal population, lazy bed cultivation became commonplace. British Archaeology magazine, February 2002. From Mesolithic times, western European peoples were united above all by one thing: access to the sea. Barry Cunliffe explains In 1934 the trawler Muroto, working out of Cardiff, dredged up a 2nd century AD Roman pot while fishing on the Porcupine Bank 250km west of the west coast of Ireland. What the find means we can only guess. Most likely it was lost overboard from a Roman trading vessel blown widely off course, but the possibility remains that it came from a more adventurous voyage of exploration - a failure perhaps about which history is silent.

More than 600 years earlier, a Carthaginian, Himilco, had sailed out of the Mediterranean deep into the Atlantic. Scottish Islands - Everything you need to know about the Scottish Islands. Uist and Barra « The Western Isles. “As for the emigrants, even now and knowing the hardships and tragedies to which they were exposed, it is not possible to judge where advantage may have lain between an island where one family could lose ten of eleven children in childhood, or in risking all and paying the price”.

(Angus MacMillan) The Uists are the central group of islands in the Outer Hebrides of Scotland. Kildonan Centre. South Uist, Benbecula and Eriskay walks. South Uist has two contrasting sides. Its eastern half rises in mountains which may be low by mainland standards but are as rugged and wild as any you'll find, they offer spectacular views over land and sea. To the west the fertile Machair - formed by sands blown onto the peat beneath - runs the whole length of the island and is fringed by an almost continuous beach.

South Uist is linked to its neighbours, both north and south, by road causeways. Benbecula is a largely low-lying island, with vital employment provided by an army base, but there is much to explore here. Eriskay, made famous by 'Whisky Galore', is the perfect small island, with a rugged hill, beautiful coastline and fine sandy beach - a little bit of heaven. Am Paipear — The Community Newspaper of the Uists. Urras Ranger. Comann Eachdraidh Bharabhais agus Bhrù. Bird Sightings : Hebrides : UK. Comann na Mara. Ports.org.uk / Introduction. INTRO TO GEOLOGY OF THE OUTER HEBRIDES. Modified from an article written in 2000 by J R Mendum, principle author of the BGS memoir on the area, a field guide by John Mendum and Doug Fettes and an unpublished Geologist's Association guide by Rod Graham.