RAWSA Products. White "Birds not Boeings" tee $25​ Badges ( all have sharp metal pin on back) $3​ If you would like to support RAWSAwith a sign on your fence or a tee shirt, you are on the right page. 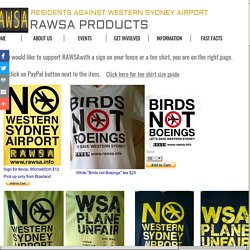 Just click on PayPal button next to the item. Click here for tee shirt size guide Sign for fence, 90cmx60cm $12 Pick up only from Blaxland. Daily Telegraph. To use this website, cookies must be enabled in your browser. To enable cookies, follow the instructions for your browser below. Facebook App: Open links in External Browser There is a specific issue with the Facebook in-app browser intermittently making requests to websites without cookies that had previously been set. This appears to be a defect in the browser which should be addressed soon. The simplest approach to avoid this problem is to continue to use the Facebook app but not use the in-app browser.

Open the settings menu by clicking the hamburger menu in the top right Choose “App Settings” from the menu Turn on the option “Links Open Externally” (This will use the device’s default browser) Enabling Cookies in Internet Explorer 7, 8 & 9 Open the Internet Browser Click Tools> Internet Options>Privacy>Advanced Check Override automatic cookie handling For First-party Cookies and Third-party Cookies click Accept Click OK and OK Enabling Cookies in Firefox Enabling Cookies in Google Chrome. Sydney’s Future Airport at Badgerys Creek. First promised in 1946 and then again in 1986, by 2026 Sydney residents should finally be able to fly into and out of a major airport at Badgerys Creek. 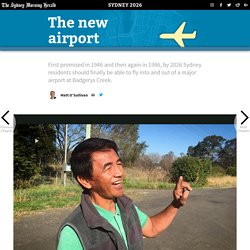 At first glance, the rolling hills look as they have for decades. Houses, chicken sheds, eucalypts and other Australian natives dot the landscape. And despite the rush of announcements by politicians, some around Badgerys Creek remain sceptical about whether the airport that has been talked about in Sydney since the 1940s will ever become a reality. Yet, slowly, the area near the foothills of the Blue Mountains is beginning to change. One of the tangible pointers to what lies ahead for 1700 hectares of Commonwealth-owned land at Badgerys Creek is a sign on Elizabeth Drive declaring the “Western Sydney Airport Site”.

A smattering of locals might be sceptical. The last to go More than a year after being handed a deadline to leave, about 20 leaseholders on the land designated for the airport are refusing to move. Advertisement Read Chapter. Badgerys Creek farmers do not see how it is possible to relocate their farms by September to make way for Sydney's new airport - ABC Rural - ABC News. Map western sydney airport. INFRA2673 WSU FACTSHEETS ENVIRONMENT 1015 FA WEB copy. Appendix C Aboriginal Heritage Report. Badgerys Creek: decades of debate over second Sydney airport. By Jessica Kidd Updated Debate has raged since the 1940s over the need for a second Sydney airport. 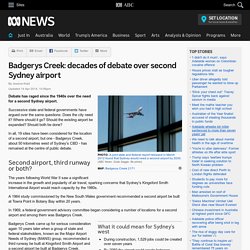 Successive state and federal governments have argued over the same questions: Does the city need it? Where should it go? Should the existing airport be expanded? In all, 19 sites have been considered for the location of a second airport, but one - Badgerys Creek, about 50 kilometres west of Sydney's CBD - has remained at the centre of public debate. Second airport, third runway or both? The years following World War II saw a significant increase in the growth and popularity of air travel, sparking concerns that Sydney's Kingsford Smith International Airport would reach capacity by the 1980s. A 1964 study commissioned by the New South Wales government recommended a second airport be built at Towra Point in Botany Bay within 20 years. In 1969, a federal government advisory committee began considering a number of locations for a second airport and among them was Badgerys Creek. 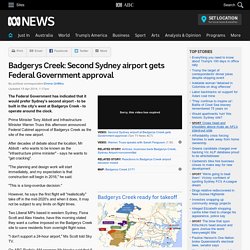 Prime Minister Tony Abbott and Infrastructure Minister Warren Truss this afternoon announced Federal Cabinet approval of Badgerys Creek as the site of the new airport. After decades of debate about the location, Mr Abbott - who wants to be known as the "infrastructure prime minister" - says he wants to "get cracking". "The planning and design work will start immediately, and my expectation is that construction will begin in 2016," he said.

"This is a long-overdue decision. " However, he says the first flight will "realistically" take off in the mid-2020's and when it does, it may not be subject to any limits on flight times. Two Liberal MPs based in western Sydney, Fiona Scott and Alex Hawke, have this morning stated they want a curfew imposed on the Badgerys Creek site to save residents from overnight flight noise. Summary brochure an airport for WS. Fact sheet Air quality. Sydney’s Future Airport at Badgerys Creek.