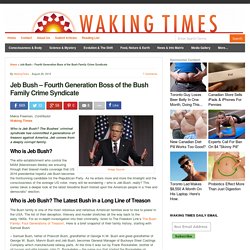 The Bushes’ criminal syndicate has committed 4 generations of treason against America. Jeb comes from a deeply corrupt family. Who is Jeb Bush? The elite establishment who control the MSM (Mainstream Media) are ensuring through their biased media coverage that US 2016 presidential hopeful Jeb Bush becomes the frontrunning candidate for the Republican Party. Who is Jeb Bush? The Bush family is one of the most notorious and nefarious American families ever to rise to power in the USA. . – Samuel Bush, father of Prescott Bush, grandfather of George H.W. . – Samuel Bush becomes President of Buckeye in 1908 when Rockefeller retires, staying there until 1927 and according to Wikipedia becoming one of the top industrialists of his generation. 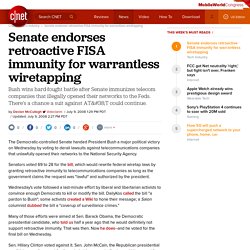 There's a chance a suit against AT&#38;T could continue. The Democratic-controlled Senate handed President Bush a major political victory on Wednesday by voting to derail lawsuits against telecommunications companies that unlawfully opened their networks to the National Security Agency. Senators voted 69 to 28 for the bill, which would rewrite federal wiretap laws by granting retroactive immunity to telecommunications companies as long as the government claims the request was "lawful" and authorized by the president. Wednesday's vote followed a last-minute effort by liberal and libertarian activists to convince enough Democrats to kill or modify the bill. DailyKos called the bill "a pardon to Bush"; some activists created a Wiki to hone their message; a Salon columnist dubbed the bill a "coverup of surveillance crimes. " Many of those efforts were aimed at Sen. CIA and the National Archives Thwart The JFK Act and Obstruct Democratic Accountability.

All records related to the assassination of President John F. 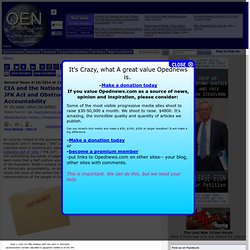 Kennedy ("JFK") are already supposed to be public. That's what Congress intended when it unanimously passed the President John F. Kennedy Assassination Records Collection Act of 1992 ("JFK Act"). It hasn't happened. The National Archives and the CIA are still withholding thousands of pages of JFK Act records in their entirety, even though it has been more than a half century since the Warren Commission issued its Report on the murder of the President. Over 1,100 CIA files dealing with the John F. The Assassination Archives and Research Center ("AARC"), a nonprofit organization dedicated to obtaining, preserving and disseminating information on political assassinations, is holding a conference on the 50th anniversary of the Kennedy assassination this September 26-28th, at the Bethesda Hyatt Regency Hotel.

Instead, NARA, deferring to the CIA, continues to refuse to release these records until 2017 -- if then. James Lesar, Bombshell Obama Vetting: 1979 Newspaper Article By Valerie Jarrett Father-In-Law Reveals Start Of Muslim Purchase Of U.S. Presidency. Why would Muslim oil billionaires finance and develop controlling relationships with black college students? 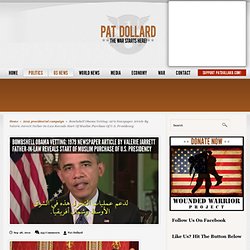 Well, like anyone else, they would do it for self-interest. And what would their self-interest be? We all know the top two answers to that question: 1. a Palestinian state and 2. the advancement of Islam in America. The idea then was to advance blacks who would facilitate these two goals to positions of power in the Federal government, preferably, of course, the Presidency. And why would the Arabs target blacks in particular for this job?

Interestingly, in context with the fact that this article was written by her father-in-law, Valerie Jarrett has an unusual amount of influence over Obama (along with personal security that may be even better than his, another unusual and intriguing bit of business here). The column itself had appeared in the St. In any case, it doesn’t matter if Vernon Jarrett and Khalid al-Mansour had a personal relationship or not. He was, of course, right. Media Self-Censorship Suppresses 3 Key Elements From Obama Foreign Policy Analysis. President Obama announced May 28 a major update of his foreign policy. 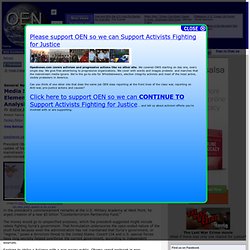 But the mainstream media, as usual, failed to report context that would make the implications understandable to the general public. (image by In the president's commencement remarks at the U.S. Military Academy at West Point, he urged creation of a new $5 billion "Counterterrorism Partnership Fund. " The money would go to unspecified purposes, which the president suggested might include rebels fighting Syria's government. Seeking to strike a balance with a war-weary public, Obama urged restraint in new commitments. Almost entirely missing from such mainstream analysis was a reminder that the U.S. Besides the legitimacy of such war-making, mainstream media self-censorship represses two other elements required for informed debate of foreign policy: power relationships and secret funding.