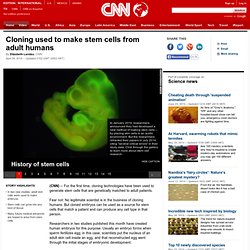 But the researchers retracted their papers in July 2014, citing "several critical errors" in their study data. Click through the gallery to learn more about stem cell research. Stem cells have the potential to become many different kinds of cells, and can renew themselves through cell division. Scientists view stem cells as a possible gateway to curing many medical conditions, from Parkinson's disease to diabetes. Stem cells are viewed on computer here at UConn Health Center in 2010. A closeup of a microscope slide taken in 2000 at the Reproductive Genetics Institute's Chicago laboratory shows transplanted stem cells taken from the umbilical cord blood of a baby named Adam Nash. In 1998, then-President Bill Clinton requested a National Bioethics Advisory Commission to study the question of stem cell research. History of stem cells. The Cloning of Barack Obama. Barackhenaten and Renaissance Tiye. Is Obama a clone of an Egyptian Pharaoh? 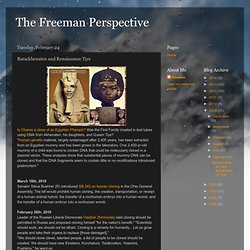 Was the First Family created in test tubes using DNA from Akhenaten, his daughters, and Queen Tiye? "Human genetic material, largely undamaged after 2,400 years, has been extracted from an Egyptian mummy and has been grown in the laboratory. One 2,400-yr-old mummy of a child was found to contain DNA that could be molecularly cloned in a plasmid vector. These analyses show that substantial pieces of mummy DNA can be cloned and that the DNA fragments seem to contain little or no modifications introduced postmortem. " March 18th, 2010 Senator Steve Buehrer (R) introduced SB 243 on human cloning in the Ohio General Assembly. February 26th, 2010 Leader of the Russian Liberal Democrats Vladimir Zhirinovsky said cloning should be permitted in Russia and proposed cloning himself "for the nation's benefit. " November 24th, 2009 President Barack Obama established a new presidential bioethics council.

Are the First Family clones? Music by MP Soundcraft. Sun Rising in the West. Has a reptilian in his head. Clone of Akhenaten? {Sun's Rising in the West} Obama Cloned of Egyptian Pharaoh. The Reptilians - Obama and the New World Order. Obama clone is reptilian!