100 Sci-Fi/Fantasy Novels to Geek Out Over - Half Price Books Blog - HPB.com 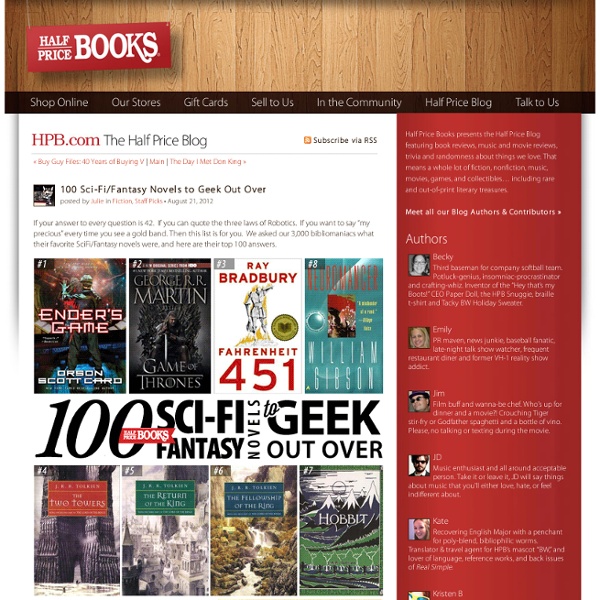 If your answer to every question is 42. If you can quote the three laws of Robotics. If you want to say “my precious” every time you see a gold band. Then this list is for you. We asked our 3,000 bibliomaniacs what their favorite SciFi/Fantasy novels were, and here are their top 100 answers. Now, Dune has been on my reading list for a while, but I am definitely going to have to read Ender's Game. You can find these books and more at your local Half Price Books. -- Julie

13 Books to Give For Christmas » Written Word Feed, by M.T. Anderson This is a book that, since it was published in 2002, I have given as a gift every year. And I will continue to do so until the curmudgeon in me takes over and I stop giving people anything, ever, at all. This is the beacon of all YA fiction, the crowning dystopia of dystopias, the kind of future that you can feel happening right now. Perfect for: Everyone. Skippy Dies, by Paul Murray It’s true. Perfect for: Adults who want to reflect on youth. How Did You Get This Number, by Sloane Crosley It’s not a book for the exhausting and/or pretentious reader (they’d be better off with a collection by David Foster Wallace, perhaps), but Crosley’s second go at a collection of essays has most of the earmarks of her first, best-selling I Was Told There’d Be Cake. Perfect for: Women, age 30 and under. Just Kids, by Patti Smith Just Kids is the winner of the 2010 National Book Award, so you can just go ahead and assume it’s going to be good. Perfect for: Girl rockers.

The 5 Creepiest Short Films I've Ever Seen I like my horror like I like my uzi fire: in short bursts. So for that reason, I have been combing Youtube for years, trying to find incredibly creepy short films to sate my need. For the most part, I have had to work my way through heaps of coal to find the few diamonds. But I found them. Some are creepy because they effectively play off of our most innate fears. Some are creepy because they are spins in old urban legends we have heard time and time again. And some are just inexplicably creepy. And the best part? Bedfellows This film manages to be scarier in two and a half minutes than most full length movies. It tells a relatively simple story of a woman recieving a rather unexpected call late one night. Besides the last frame of the film, which is a bit silly, this film is pitch perfect and sits with you long after you see it. Or should I say, lays with you? Red Lines Man, if there is one thing we hate more than staying after school, it is staying after school in a haunted school. The Black Hole

Dark days: The fascinating history of the dystopian novel Dystopia, or the inverse of Utopia, the ideal society, is often thought of as a relatively modern literary genre, but in fact it has a long and fascinating history. Here’s a quick run-through of some of the most significant volumes that have made us think long and hard about the societies we live in. Revolutionary writing Dystopia has been a recurrent theme of popular and literary fiction since way back in the eighteenth century. When it seeks to explore political and social shortcomings, then, these books don’t tend to be shy about their revolutionary aims. Beginning with a journey Starting with a bang, we’ve got Gulliver’s Travels (1726), Jonathan Swift’s belting satire that’s been Disney-fied in the popular imagination into a Lilliputian jape; in fact, the novel’s a lot darker, presenting a harsh critique of various aspects of contemporary society disapproved of by the Anglican Swift. No better than a Yahoo The dawn of thinking machines A life of crime Doublethink and soma A terrible tale

Five Truly Nihilist Movies You May Not Have Seen God is dead, all love is fallacy, and the only hope we have is that we are truly hopeless. Nihilism and I have a strange relationship. Because as much as I try to take massive leaps beyond it, something hopeless happens, rising up out of nowhere like a wall, and knocks me off my feet, reminding me that nihilism exists for a reason. Or does it? Some claim nihilism even negates a belief in morality or even, actual reality in some cases. Dead Man’s Shoes This movie burrows into your guts like a worm, and never leaves. If I was asked, right now, to recommend ONE MOVIE from Netflix for people to stream and watch tonight, it would be Dead Man’s Shoes. Dead Man’s Shoes is the story of a young man who was away fighting for the British military, and comes home to find out some drug dealers have taken in his special-needs brother, and have been abusing him and demeaning him for their own pleasure. But you need to know, it is not just a revenge or redemption story. Red, White and Blue Brazil