The Vesica Piscis - The Fish as Spiritual Symbol and Bumper Sticker. From its earliest times, Christianity - the dominant religion of the West for the last millennium and a half - has been quietly syncretic; that is to say Christianity has taken over and adopted (usually without attribution) the legends, sacred sites, and symbols of older religions, adapting them to fit its own story. 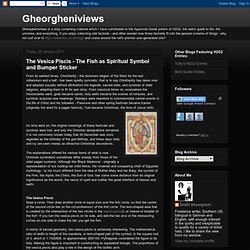 From classical times on, everywhere the missionaries went, gods became saints, holy wells became the scenes of miracles, and symbols acquired new meanings. Holidays were reworked to commemorate central events in the life of Christ and his followers - Passover and other spring festivals became Easter (originally the word for a pagan festival), Yule became Christmas, the time of Jesus' birth. As time went on, the original meanings of these festivals and symbols were lost, and only the Christian designations remained.

The explanations offered for various items of what is now Christian symbolism sometimes differ sharply from those of the older pagan systems. CHRISTIAN SYMBOLS: THE FISH (ICHTHUS, ICTUS), CROSS AND CRUCIFIX. Christian symbols Sponsored link. 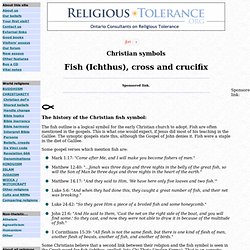 The history of the Christian fish symbol: The fish outline is a logical symbol for the early Christian church to adopt. Fish are often mentioned in the gospels. This is what one would expect, if Jesus did most of his teaching in the Galilee. Some gospel verses which mention fish are: Some Christians believe that a second link between their religion and the fish symbol is seen in the Greek word for fish (ichthus, spelled: Iota Chi Theta Upsilon Sigma). An acrostic is an "arrangement of words in which the first letter of each line ordinarily combines with others to form a word or words or the alphabet. " 1 The Apostles were often referred to as "fishers of men". According to Albatrus.org: "When threatened by Romans in the first centuries after Christ, Christians used the fish [symbol to] mark meeting places and tombs, or to distinguish friends from foes.

" Ichthys. Ichthys (also Ichthus or Ikhthus /ˈɪkθəs/[1]), from the Koine Greek word for fish: ἰχθύς, (capitalized ΙΧΘΥΣ or ΙΧΘΥϹ) is a symbol consisting of two intersecting arcs, the ends of the right side extending beyond the meeting point so as to resemble the profile of a fish, used by early Christians as a secret Christian symbol[2] and now known colloquially as the "sign of the fish" or the "Jesus fish. "[3] History[edit] Symbolic meaning[edit] An early circular ichthys symbol, created by combining the Greek letters ΙΧΘΥΣ, Ephesus. ΙΧΘΥΣ (Ichthus) is an acronym/acrostic[4] for "Ίησοῦς Χριστός, Θεοῦ Υἱός, Σωτήρ", (Iēsous Christos, Theou Yios, Sōtēr), which translates into English as "Jesus Christ, God's Son, Saviour".

Historians[who?] A fourth century A.D. adaptation of ichthys as a wheel contains the letters ΙΧΘΥΣ superimposed such that the result resembles an eight-spoked wheel.[9] Fish in the Gospels[edit] Having resurrected, Jesus is offered some broiled fish and honeycomb in Luke 24:41-43. Origin of the "Christian" Fish Symbol. Most symbols that people use have a story behind them and are used to make a statement. 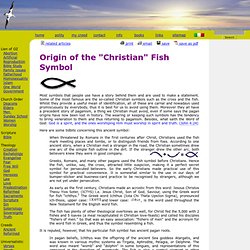 Some of the most famous are the so-called Christian symbols such as the cross and the fish. Whilst they provide a useful mean of identification, all of these are carnal and nowadays used promiscuously by everybody, thus it is best for us to avoid using them. Moreover they all have a precedent story of paganism, a thing we Christian must avoid, even if some says the pagan origins have now been lost in history. The wearing or keeping such symbols has the tendency to bring veneration to them and thus returning to paganism.

Besides, what saith the Word of God: God is a spirit, and the ones worshiping Him must worship in spirit and truth. Here are some tidbits concerning this ancient symbol: When threatened by Romans in the first centuries after Christ, Christians used the fish mark meeting places and tombs, or to distinguish friends from foes. A Philistine deity.