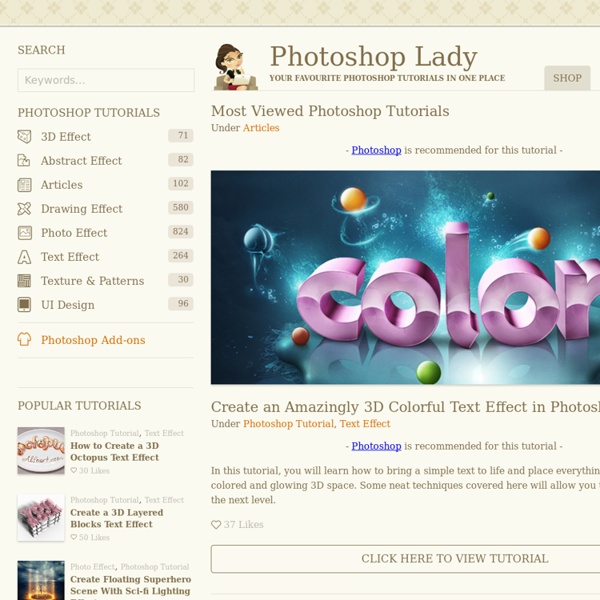 Under Articles - Photoshop is recommended for this tutorial - Under Photoshop Tutorial, Text Effect In this tutorial, you will learn how to bring a simple text to life and place everything in fantastic, colored and glowing 3D space. Some neat techniques covered here will allow you to bring your art to the next level. Under 3D Effect, Photoshop Tutorial In this tutorial, it will demonstrate you how to create a realistic 3D snooker ball. Under Drawing Effect, Photoshop Tutorial Sometimes, you may want to draw / create a flower in digital form. Under Photo Effect, Photoshop Tutorial In lots of cartoon programmes or legends, you may have seen a human face on tree which is able to talk or move. There are various text effects. To design a 3D cap, it is similar approach as other 3D object. This tutorial will explain how to make nice castle from a several photos in photoshop. Chinese painting look very difficult to make, as it requires a lot of techniques and deep knowledge in this.

SOCIAL NETWORKING GOD: 350+ Social Networking Sites One of the main topics here at Mashable has always been social networking. In the past several years, some networks have thrived, some vanished, while hundreds of new ones appeared. It has become a huge area to follow, and this article illustrates this well: a collection of over 350 social networking sites, all of which were covered in one way or another here at Mashable. We hope to have created an extensive and useful resource for anyone interested in social networking. Enjoy. Feel free to add more apps in the comments.

Microsoft CEO Steve Ballmer to retire as company faces needed shake-up Microsoft has stepped into a new and uncertain era with the announcement that CEO Steve Ballmer will retire within 12 months, triggering a search for a successor to take over the software behemoth. The announcement on Friday surprised analysts and investors and sent shares surging, reflecting belief that the company will benefit from new leadership as it tries to innovate and chase the market for smartphones and tablets. "There is never a perfect time for this type of transition, but now is the right time," Ballmer said in a statement. The company needed a leader who could see through its reorganisation and new strategy, he added.

Charles 'Chuck' Fitch unmasked as Ebay's biggest troll Ebay-hating troll named as Charles 'Chuck' Fitch of Canton, MichiganLocal reporter Rob Wolchek hired private investigators to track him downTroll calls himself Ebayisajoke and harasses successful sellers on the siteHe posts videos threatening to close down people's online businessesHe refused to comment when approached by TV reporter over troll claims By Daily Mail Reporter Published: 09:26 GMT, 13 August 2013 | Updated: 14:29 GMT, 13 August 2013 An internet troll who harassed successful sellers on eBay in a bid to put them out of business has been exposed after years of abuse.

Vine - In memoriam: 13 tech products we lost in 2016 Twitte (TWTR, Tech30)announced in October it was shutting down its beloved short-form video app, Vine -- a move that upset its most loyal fans. But recently, the company announced plans to bring it back from the dead. Sort of. Word Games & Quizzes Login or Register Hello, SAVED WORDS view recents Words for When You're Not Sure Just a shot in the dark here Help Your Kids Beat the Summer Slump All cliparts here are public domain. You may use these cliparts for any purpose, including commercial. But if some clipart contains logos and products you need to be careful. Using someone else's trademark commercially can get you sued. How (and why) to use Google Photos on your iPhone or iPad Below, we provide instructions for backing up all of the photos on your phone to Google Drive via the Google Photos for iOS app, so you can delete them from your phone (and the iCloud) as needed. Download & install the app The Google Photos for iOS app is free.

Welcome To Vegas: Where Everything Is A Game, And Games Are Illegal The End Of Email As We Know It