Connections Throughout and Beyond the Diaspora

Indians think Africans are “frauds and prostitutes”—so why do they still come to India to study? Bengaluru, India/Dar es Salaam, Tanzania On the morning of Feb. 06, a few hundred African students gathered on the steps of Bengaluru’s Town Hall, a striking, colonnaded building at the heart of the sprawling metropolis best known as India’s Silicon Valley. 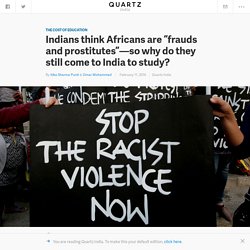 Holding posters, some printed and most handwritten, and shouting slogans, they were protesting the assault on a Tanzanian student who had alleged that she was stripped and beaten up by a mob on Jan. 31. It was a heartfelt outcry over violence against Africans that is becoming all too commonplace in India. But there was also a strange air of amusement and bewilderment at the protest site. The policemen sniggered, speaking among themselves. In many ways, those reactions reflect the reality that African students in India must contend with: A selectively racist nation that, at once, has the potential to fulfil their dreams, but which could also turn into their worst nightmare. “They think Africans are into fraud and prostitution” Postcolonial Fantasy and Africa- Against the Word “Tribe”

“The idea of tribes was brought to Africa for several reasons…. 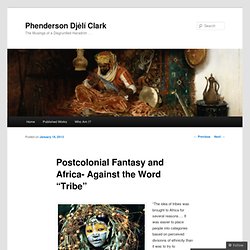 It was easier to place people into categories based on perceived divisions of ethnicity than it was to try to understand the multi-layered, fluid identities that prevailed…. colonial authorities found that placing people into “tribes” with “chiefs” was an effective way of creating a political order.” –John Reader “Why don’t you use the word tribe? I think this would make your story seem more realistic.” So read the critique on a rough draft fantasy story I submitted to a writing group. LatiNegra Sexologist. Anthony Otero: Black History Month: Afro Latinas. When Afro-Latinos discuss Black History month, we think about the struggle of correctly identifying Latino historical figures that this month should represent alongside accomplished African-Americans. 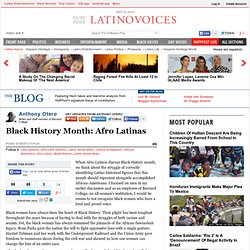 I focused on men in my earlier discussion and as an employee of Barnard College, an all-women's institution, I would be remiss to not recognize black women who have a loud and proud voice. Where Slaves Ruled. By Charles C. 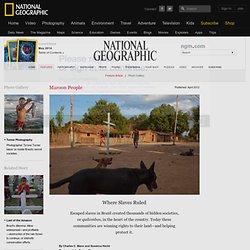 Mann and Susanna Hecht Imagine flying, impossibly, over the Earth in the 17th century—during the time described in American history books as the colonial period, when Europeans swarmed into the New World to dominate an almost empty wilderness. Instead, you would see tens of millions of native people already living in the Americas, joined by an extraordinary flow not of European colonists but of African slaves. Up until the early 19th century, almost four times as many Africans as Europeans came to the Americas. Looking down from above, you wouldn’t know that the tiny numbers of Europeans were supposed to be the stars of the story.

You’d have a lot to watch. Largely conducted out of sight of Europeans, the complex interplay between black and red is a hidden drama that historians and archaeologists have only recently begun to unravel. Macaws screech overhead as the little boat motors upstream, water hyacinth rocking in its wake. Estevanico the Moor: Slave and Explorer - English-Language Version. The life of Estevanico is one of the most fascinating stories of American history. 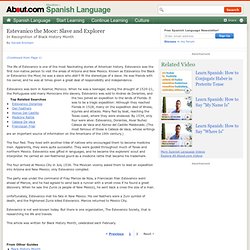 Estevanico was the first non-native person to visit the areas of Arizona and New Mexico. Known as Estevanico the Black or Estevanico the Moor, he was a slave who didn't fit the stereotype of a slave. He was friends with his owner, and he was at times given a great deal of responsibility and independence. Estevanico was born in Azamor, Morocco. Reading the West Fall 2008. Home Archives Reading Room Search Editorial Info Books Subscribe West Links. 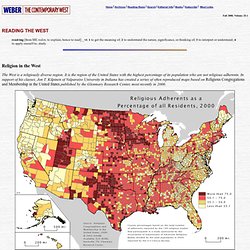 Taíno: nation of jamaica (‘xaymaca’) « blkcowrie ☼ ☥ ♥ Arawak was the language of the first settlers on the island of Jamaica, the Tainos. 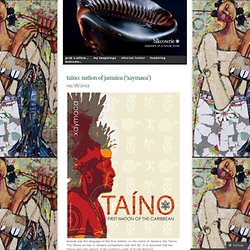 The Tainos arrived in Jamaica somewhere near 600 AD. It is assumed that the Tainos were the natives of the northern coast of South America. The Arawakan speaking Tainos were peace-loving people. They settled down in Jamaica and continued to live there for almost 900 years. AltXmasArt 4: Black Madonna - Mitochondrial Eve. The Madonna and Eve become one powerful, dark-skinned matriarch in “Black Madonna - Mitochondrial Eve” by David Hewson . 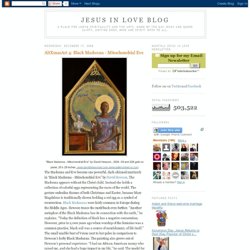 The Madonna appears without the Christ child. Instead she holds a collection of colorful eggs representing the races of the world. The gesture embodies themes of both Christmas and Easter, because Mary Magdalene is traditionally shown holding a red egg as a symbol of resurrection. Black Madonnas were fairly common in Europe during the Middle Ages. Hewson traces the motif back even further. Center For Chthonic Studies - Retroactive Erasure: The Black Madonnas of Europe. James Baldwin in Turkey. I am the darker brother. Woman with hoe in hand, and baby on your back, Sorrow-sated and tired to apathy, My sister: I oil your skin, manicure your feet, take hookworm from you Children, You man takes back his spear. 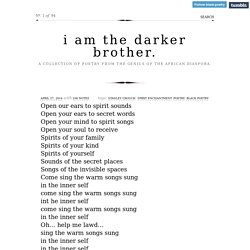 I turn your sweat into perfume and your breasts into onyx-tipped Fruit. I erase the erosions of childbearing from your stomach And the robbers of your teeth have replaced them with pearls And the scent of honeysuckle. I give desire again, when your man comes And if immortality slips, screaming, from your loins, I give you joy to replace despair.

The river gives its many-tongued kisses as you bathe; It does not hide the crucified body of your brother. I give you handmaidens, not a boss lady; Bodyguards, not the Klan I give you a castle, with peacocks in the garden: You will never know of shacks with flies or tenements with rats. I give you jewels and crowns for your velurial hair And rings for your ebon hands. —alice h. jones, for sapphire, my sister.