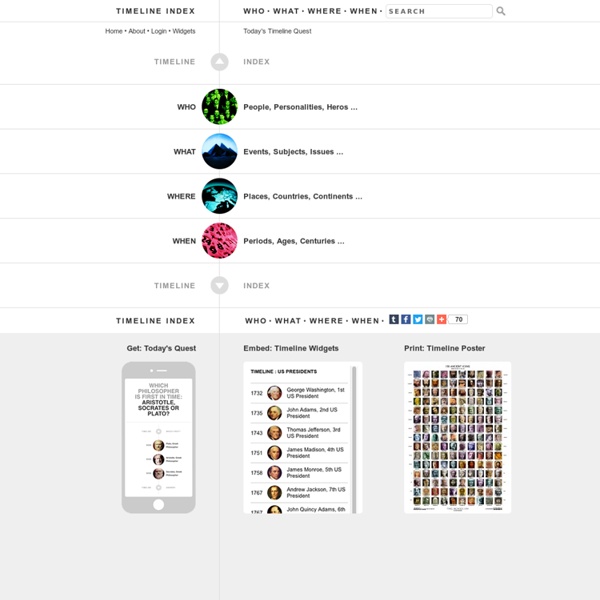 Index Mundi - Country Facts Breathingearth - CO2, birth & death rates by country, simulated real-time CultureGPS Hofstede's Cultural Dimension Disclaimer: Culture influences patterns of thinking which are reflected in the meaning people attach to various aspects of life and which become crystallized in the institutions of a society. This does not imply that everyone in a given society is programmed in the same way: there are considerable differences between individuals. Statements about culture do not describe "reality", they are all general and relative. The cultural systems of nations and their subdivisions are very complex. The information contained in CultureGPS is intended as a guideline and for creating awareness. Usage of the tool is at your own risk!

Grassroots Mapping WorldMap of SocialNetworks January 2017: a new edition of my World Map of Social Networks, showing the most popular social networking sites by country, according to Alexa & SimilarWeb traffic data (caveat: it’s hard to understand the impact of Google+ because it is part of Google domain traffic). There are a lot of news since last January: Facebook is still the leading social network in 119 out of 149 countries analyzed, but it was stopped in 9 territories by Odnoklassniki, Vkontakte and Linkedin. It’s interesting to see that in some countries, like Botwana, Mozambique, Namibia, Iran e Indonesia, Instagram wins and that some African territories prefer LinkedIn. Overall LinkedIn conquers 9 countries, Instagram 7, meanwhile VKontakte and Odnoklassniki (part of the same group Mail.ru) grow up in Russian territories. In China QZone still dominates the Asian landscape with 632 million users and Japan is the only country where Twitter is the leader. But what’s going on behind the first place? inShare1,047 inShare1,047

Polymaps Mappiness iPhone App Maps Happiness (Say That Three Times Fast) Officially launching today is Mappiness, a UK iPhone app that “maps Happiness” by pinging users with a survey in order to plot out their feelings during the day (happiness, in this case, is apparently user-defined). Using LBS, the app links responses and response locations to environmental data in an attempt to, according to lead researcher George MacKerron, “better find answers on the impacts of natural beauty and environmental problems on individual and national well being.” MacKerron, based at the London School Economics, elaborated on the idea of tracking happiness, “In the 19th century economists imagined a ‘hedonometer,’ a perfect happiness gauge, and psychologists have more recently run small scale ‘experience sampling’ studies to see how mood varies with activity, time of day and so on.” Mappiness is the first project of its kind to add location to the mix. Now, thanks to the iPhone, we might get a better grasp on humanity’s happiness habits.

mappiness, the happiness mapping app Japanese artist maps 1945-1998's nuclear explosions A Japanese artist named Isao Hashimoto has created a series of works about nuclear weapons. One is titled "1945-1998" and shows a history of the world's nuclear explosions. Over the course of fourteen and a half minutes, every single one of the 2053 nuclear tests and explosions that took place between 1945 and 1998 are is plotted on a map. A metronomic beep every second represents months passing, and a different tone indicates explosions from different countries. After a couple of minutes or so, however, once the USSR and Britain entered the nuclear club, the tests really start to build up, reaching a peak of nearly 140 in 1962, and remaining well over 40 each year until the mid-80s. It's a compelling insight into the history of humanity's greatest destructive force, especially when you remember that only two nuclear explosions have ever been detonated offensively, both in 1945. Here's the video:

CISCO+A'dam Urban EcoMap AMSTERDAM, Dec. 1, 2009 - Cisco and the city of Amsterdam today announced the rollout of Urban EcoMap, an Internet-based tool that enables cities around the world to provide smarter climate change information for their citizens. A city can use Urban EcoMap to create awareness among its residents of the impact of carbon emissions on their urban environment. It provides information on carbon emissions from transportation, energy and waste among neighborhoods, organized by district, and delivers tips on ways to reduce a resident's carbon footprint. Facts/Highlights: The application is an extension of the Urban EcoMap launched in May 2009 in the city of San Francisco. Additional Information: Urban EcoMap is part of the global Urban Services Platform approach toward which visionary cities and the information and communications technology (ICT) industry are moving. Availability: Urban EcoMap is scheduled to be available for public use by citizens of Amsterdam on Dec. 1. Supporting quotes: Images: