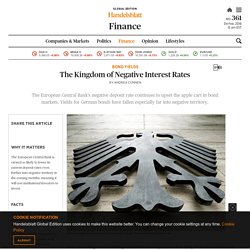 Yields for German bonds have fallen especially far into negative territory. read Banks are making some interesting calculations these days, such as how many €500 bills would fit on a standard euro-currency pallet. Negative-Interest-Rate Effect already Dead, Central Banks Lost Control over Stocks. And there’s a bitter irony. 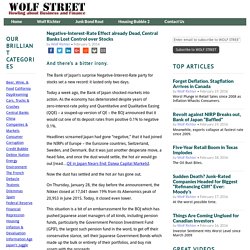 The Bank of Japan’s surprise Negative-Interest-Rate party for stocks set a new record: it lasted only two days. Today a week ago, the Bank of Japan shocked markets into action. As the economy has deteriorated despite years of zero-interest-rate policy and Quantitative and Qualitative Easing (QQE) – a souped-up version of QE – the BOJ announced that it would cut one of its deposit rates from positive 0.1% to negative 0.1%. Headlines screamed Japan had gone “negative,” that it had joined the NIRPs of Europe – the Eurozone countries, Switzerland, Sweden, and Denmark. But it was just another desperate move, a head fake, and once the dust would settle, the hot air would go out [read…QE in Japan Nears End: Daiwa Capital Markets]. Now the dust has settled and the hot air has gone out. On Thursday, January 28, the day before the announcement, the Nikkei closed at 17,041 down 19% from its Abenomics peak of 20,953 in June 2015. 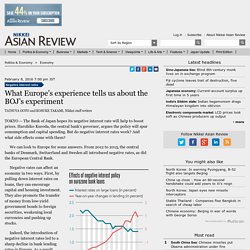 Haruhiko Kuroda, the central bank's governor, argues the policy will spur consumption and capital spending. But do negative interest rates work? And what side effects come with them? We can look to Europe for some answers. From 2012 to 2015, the central banks of Denmark, Switzerland and Sweden all introduced negative rates, as did the European Central Bank. Negative rates can affect an economy in two ways. Ecorevii2014 h6. The European Central Bank's Negative Interest Rate: Doubts that it can resolve the credit squeeze. Since the start of the year, the U.S. 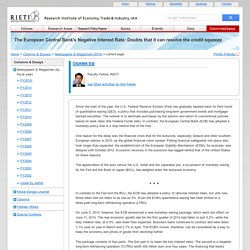 Federal Reserve System (Fed) has gradually tapered back its third round of quantitative easing (QE3), a policy that includes purchasing long-term government bonds and mortgage-backed securities. The outlook is to eliminate purchases by the autumn and return to conventional policies based on bank rates (the Federal Funds rate). In contrast, the European Central Bank (ECB) has adopted a monetary policy that is a step behind that of the Fed. One reason for the delay was the financial crisis that hit the eurozone, especially Greece and other southern European nations in 2010, as the global financial crisis spread.

Putting financial safeguards into place also took longer than expected; the establishment of the European Stability Mechanism (ESM), for example, was delayed until October 2012. In contrast to the Fed and the BOJ, the ECB has adopted a policy of ultra-low interest rates, but until now, those rates had not fallen to as low as 0%. Europe’s fashion for negative interest rates now also big in Japan. A woman looks at an electronic stock board at a securities firm in Tokyo, Friday, Jan. 29, 2016. 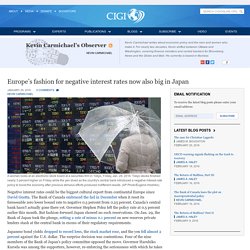 Tokyo stocks finished nearly 3 percent higher on Friday while the yen dived as the country's central bank introduced a negative interest rate policy to boost the economy after previous stimulus efforts produced indifferent results. (AP Photo/Eugene Hoshiko) Negative interest rates could be the biggest cultural export from continental Europe since David Guetta. The Bank of Canada embraced the fad in December when it reset its foreseeable zero lower bound rate to negative 0.5 percent from 0.25 percent.

Canada’s central bank hasn’t actually gone there yet. Japanese bond yields dropped to record lows, the stock market rose, and the yen fell almost 2 percent against the U.S. dollar. A world of negative interest rates (Tue, Feb 16 2016) Theory into practise Negative interest rates were once confined to the models and thought experiments of economic academics. 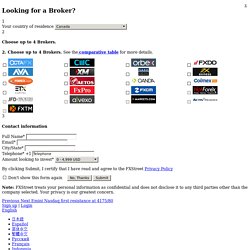 But in recent times this most unconventional of monetary policy tools has escaped from the classroom and appeared in the real world. Deterring investors. Europe has negative interest rates. How does that work? - Quora. Interest%20Rate%20Rass through%20and%20the%20Demand%20for%20Cash%20at%20Negative%20Interest%20Rates. The ECB`s negative interest rate. Cash Is King as Europe Adapts to Negative Interest Rates: Chart. Negative interest rates arrive in Japan. HARUHIKO KURODA, the governor of the Bank of Japan, surprised his audience at the World Economic Forum’s recent gathering in Davos, Switzerland, when he called upon China to impose tighter capital controls to stabilise its currency—a breach of central-banking orthodoxy. 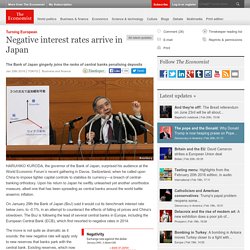 Upon his return to Japan he swiftly unleashed yet another unorthodox measure, albeit one that has been spreading as central banks around the world battle anaemic inflation. On January 29th the Bank of Japan (BoJ) said it would cut its benchmark interest rate below zero, to -0.1%, in an attempt to counteract the effects of falling oil prices and China’s slowdown. Negative 0.5% Interest Rate: Why People Are Paying to Save. Photo When you lend somebody money, they usually have to pay you for the privilege. 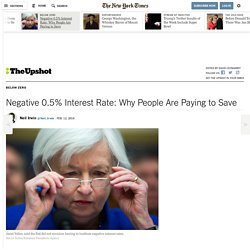 That has been a bedrock assumption across centuries of financial history. But it is an assumption that is increasingly being tossed aside by some of the world’s central banks and bond markets. A decade ago, negative interest rates were a theoretical curiosity that economists would discuss almost as a parlor game. Two years ago, it began showing up as an unconventional step that a few small countries considered. On Thursday, Sweden’s central bank lowered its bank lending rate to a negative 0.5 percent from a negative 0.35 percent, and said it could cut further still; European bank stocks were hammered partly because investors feared what negative rates could do to bank profits. But as negative rates — in which depositors pay to hold money in bank accounts — become a more common fixture, there are many unknowns about what these policies mean for finance, for the economy and even for the definition of money. 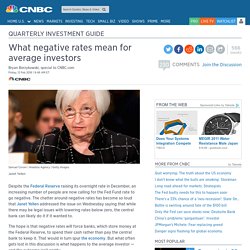 That's because when rates drop, investors have to buy stocks — and usually high-yielding ones — to make any money. However, that's not what's happened in regions that have already gone negative. In June 2014, the European Central Bank's deposit rate was cut to –0.1 percent. Since then, the iShares MSCI EMU Index ETF — a security that tracks an index composed of large- and mid-cap companies located in euro zone countries — is down nearly 30 percent. Since Switzerland imposed negative rates in December 2014, the iShares MSCI Switzerland Index ETF has fallen by about 14 percent. Of course, the U.S. is far larger than many of these markets, so what happens there may not happen here, but John Lonski, chief capital markets economist at Moody's Analytics, is of the view that stocks will drop if rates fall below zero. 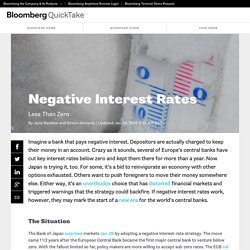 The move came 1 1/2 years after the European Central Bank became the first major central bank to venture below zero. With the fallout limited so far, policy makers are more willing to accept sub-zero rates. The ECB cut a key rate further into negative territory Dec. 3, even though President Mario Draghi earlier said it had hit the “lower bound.” It now charges banks 0.3 percent to hold their cash overnight. Why use negative interest rates? Image copyright Thinkstock Interest rates are now negative, below zero, for a growing number of borrowers, mainly in the financial markets. It means in effect they are being paid to borrow someone else's money. So what on earth is going on? Global Economic Prospects June 2015 Negative interest rates. Central banks. Uk.businessinsider. What you need to know about the Bank of Japan and negative interest rates. The Bank of Japan brought the thunder Friday, shocking investors and economists after it pushed a key interest rate into negative territory in its latest attempt to reinflate the country’s economy.

Here’s what you need to know about negative rates and the Bank of Japan: The rate cut The Bank of Japan announced it had cut the rate on excess reserves to minus 0.1%, meaning institutions will have to pay the central bank for the privilege of parking reserves that exceed those required by regulators. The rate on most existing reserves, however, remains at 0.1%, while the rate for required reserves was cut to zero (see chart below). Unlike the single negative rate applied to deposits parked at the European Central Bank, the Japanese move is similar to tiered measures put in place by the Swiss National Bank, which punishes sight deposits, or commercial bank assets, of more than 320 billion Swiss francs ($312.5 billion) with a fee of 0.75%.