30 Facts About the F-22 Raptor - the Brofessional. Inflatable Plane - Goodyear Inflatoplane. Newark element14. Boeing 777 from Manilla Folders, A 6+ Year Effort. The closer you look the more you will be in awe of this shockingly intricate 777 replica. 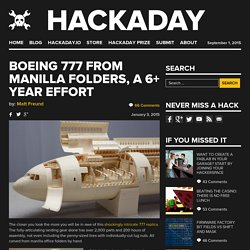 The fully-articulating landing gear alone has over 2,000 parts and 200 hours of assembly, not even including the penny-sized tires with individually-cut lug nuts. All carved from manilla office folders by hand. A high school art architecture class in 2008 inspired this build by teaching a few papercrafting techniques. When [Luca] got a hold of a precision Air India 777-300ER schematic, he started building this 5 foot long 1:60 scale model. Picture-Perfect SR-71. From 1983 to 1989, I got to fly the world’s most extraordinary airplane. 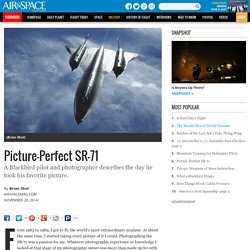 At about the same time, I started taking every picture of it I could. Photographing the SR-71 was a passion for me. Whatever photographic experience or knowledge I lacked at that stage of my photographic career was more than made up for with my enthusiasm for the airplane. I am often asked which of my photographs of the SR-71 is my favorite. It is an easy question to answer. The Warm Glow of Mach 3. The Flight Loads Laboratory at NASA's Armstrong Flight Research Center is celebrating 50 years. 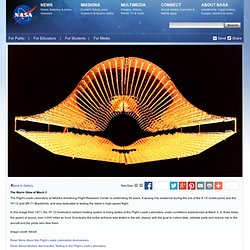 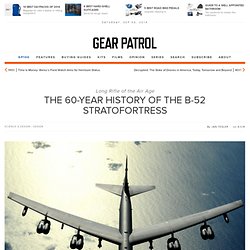 Air Force from 1953 to 1957, called the Boeing B-52 “the long rifle of the air age” shortly after it entered service on June 29, 1955, no one imagined that the eight-engine, 390,000-pound bomber would still be operational 60 years later. Had he a crystal ball, General Twining would have been able to add that the nation’s new “long rifle” would go on to become the longest-serving military aircraft in American history. Continually upgraded, modified and adapted to new missions, the amazing B-52 is far from being finished after six decades; in fact, the Air Force plans to fly it until 2040. Inside the ISS - Expedition 38 Earth Observations. The Impressive A-10 Thunderbolt Fighter Jet.

Aviation News, Airplane Crash Analysis and Pilot Resource. Hovercraft. The Jumbo Jets Boeing and Airbus Turn Into Posh Private Planes. 27 of the Most Eye-Popping Cargo Aircraft Ever Built. Blog - AirPigz. Some Bizarre Aircrafts. Top 10: Airlines with the best business class cabins in 2013 ~ The Aviation Writer. In the first guest blog here at TheAviationWriter.com, we invited Jonny Clark, founder of , to share his Top 10 Business Classes to look out for in 2013. 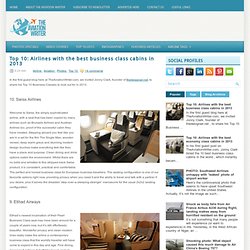 Welcome to Swiss, the simply sophisticated airline, with a seat that has been copied by many airlines such as Brussels Airlines and Austrian Airlines too, proof of the successful cabin they have created. Stepping aboard you feel like you are in a set for the film The Single Man; wooden veneer, deep warm greys and stunning modern design touches make everything feel like they have a place and purpose.

Clean dining and drink options match the environment. Whilst there are no bells and whistles to this stripped-back Swiss product, it is consistent, practical and comfortable. The perfect and honest business class for European business travellers. 9. Boeing 747 vs Airbus A380. 7 Horrifying Aircraft Landings (in which no one died) Many people board an airplane flight thinking that if anything goes wrong, they will probably die. 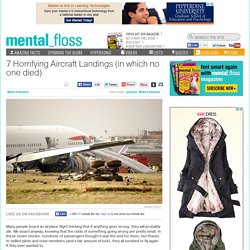 We board anyway, knowing that the odds of something going wrong are pretty small. In these seven stories, hundreds of passengers thought it was the end for them, but thanks to skilled pilots and crew members (and a fair amount of luck), they all survived to fly again. If they ever wanted to. 1. British Airways Flight 38 Beijing to London 16 crew, 136 passengers January 17, 2008 On approach to Heathrow airport, the plane began to drop faster than it should. 2. London to Auckland 15 crew, 248 passengers June 24, 1982. Jon Proctor » New York City Through the Years. February 15, 2014 Update: This page has been viewed more than 103,000 times; thank you so much! 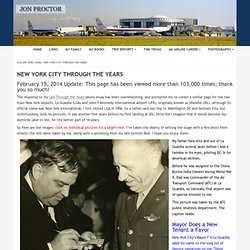 The response to my LAX Through the Years photo essay has been overwhelming, and prompted me to create a similar page for the two main New York airports, La Guardia (LGA) and John F Kennedy International Airport (JFK), originally known as Idlewild (IDL), although its official name was New York International. I first visited LGA in 1956, on a father-and-son trip to Washington DC and Gotham City, but unfortunately took no pictures.

It was another five years before my first landing at IDL; little did I imagine that it would become my domicile later in life, for the better part of 14 years. So here are the images; click on individual pictures for a larger view. I’ve taken the liberty of setting the stage with a few shots from others; the rest were taken by me, along with a sprinkling from my late brother Bob. This picture was taken by the ATC public relations department. The Law Offices of Countryman & McDaniel.