How Exercise Shapes You, Far Beyond the Gym. How technology disrupted the truth. One Monday morning last September, Britain woke to a depraved news story.

The prime minister, David Cameron, had committed an “obscene act with a dead pig’s head”, according to the Daily Mail. “A distinguished Oxford contemporary claims Cameron once took part in an outrageous initiation ceremony at a Piers Gaveston event, involving a dead pig,” the paper reported. Seth Godin. Brain Pickings. Violence is contagious: Stopping its transmission became the mission of the man who’d fought TB and cholera in Somalia. 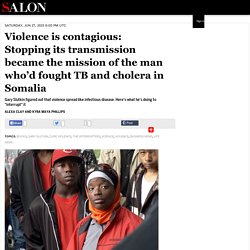 A physician by training, a “very conventional training,” he added, Dr. Slutkin had devoted himself to designing behavior change and epidemic control programs. As a chief resident at the prestigious San Francisco General Hospital, Slutkin worked on a tuberculosis prevention program. After two years, new cases of TB infection in the surrounding area dropped by over 50 percent, and the rate of those completing TB therapy increased from 50 to 95 percent. Next stop was Somalia.

In Somalia, Slutkin worked for the country’s director of primary health care and assisted in preventing the spread of tuberculosis and a deadly cholera outbreak. After three years in Somalia, Slutkin took a position at the World Health Organization, where he worked to fight the HIV/AIDS epidemic in Uganda. His personal life and professional life suffered. He returned to the United States and soon found himself asking, “What next?”

Jonathan F.P. Rose - Thoughts on a Well Tempered City. Earlier this year, UNICEF released a report comparing the wellbeing of children in 29 of the world’s most advanced nations. 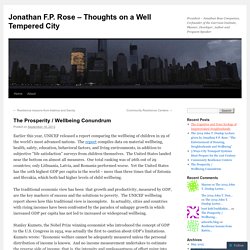 The report compiles data on material wellbeing, health, safety, education, behavioral factors, and living environments, in addition to subjective “life satisfaction” surveys from children themselves. The United States landed near the bottom on almost all measures. Our total ranking was of 26th out of 29 countries; only Lithuania, Latvia, and Romania performed worse. Yet the United States has the 10th highest GDP per capita in the world – more than three times that of Estonia and Slovakia, which both had higher levels of child wellbeing. The traditional economic view has been that growth and productivity, measured by GDP, are the key markers of success and the solutions to poverty. A Curious Mind. Here are five science stories that I found intriguing during 2013. 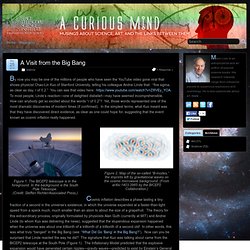 I don’t mean to imply that these necessarily represent the most important discoveries, rather, these are simply stories that, for one reason or another, caught my attention more than others. 1. Great Ball of Fire. About 14.73x. Edge.org. Edge.org. Master Curator Paul Holdengräber Interviews Hitchens, Herzog, Gourevitch & Other Leading Thinkers. Schedule. An experiment in community.... - The World Cafe Community. An interesting experiment has been taking place in Melbourne, Australia around the creation of generative spaces for strengthening neighbourhoods and tackling challenging issues. 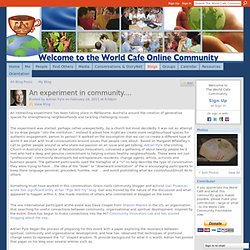 The experiment was started, perhaps rather unexpectedly, by a church but most decidedly it was not an attempt to try draw people “into the institution.” Instead it asked how might we create more neighbourhood spaces for authentic engagement, person to person? It worked on the assumption that we can co-create a different type of world if we start with local conversations around issues that people care about. Based on Margaret Wheatley’s call to gather people around us who share our passion on an issue and get talking, Adrian Pyle (the Uniting Church in Australia’s Director of Relationships Innovation), convened a gathering of about twenty people he’d met who had a deep and genuine commitment to helping sustain healthy neighbourhoods.

Project H Design. LOMBARD MENNONITE PEACE CENTER. Architecture for Humanity. The Splendid Table with Lynne Rossetto Kasper. Evolution for Everyone - Just another site. ERS. Charles Darwin and other early evolutionists were fascinated by religious phenomena and how they might be explained from an evolutionary perspective. Nevertheless, evolutionary theory became restricted to the biological sciences and excluded from the study of many human-related subjects for most of the 20th century. Only now is the theory being used to explain all aspects of humanity in addition to the rest of life. The new field of evolutionary religious studies is part of this larger trend.

This website provides an introduction to the study of religion from an evolutionary perspective. It includes the following features: Please visit the EvoS web site for a more general introduction to evolution in relation to human affairs. This website is funded by a TARP (Templeton Advanced Research Program) grant from the John Templeton Foundation, which is administred by the Metanexus Institute.

For questions and comments, contact the program director, David Sloan Wilson. Quinoa – The Ultimate Guide to an Ancient Super Food. South American’s have been cooking quinoa for centuries. 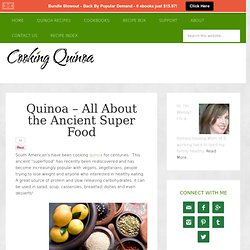 This ancient “superfood” has recently been rediscovered and has become increasingly popular with vegans, vegetarians, people trying to lose weight and anyone who interested in healthy eating. A great source of protein and slow releasing carbohydrates, it can be used in salad, soup, casseroles, breakfast dishes and even desserts! Brain Pickings. Lifesquare. The Losses and the Laughter We Grow Into with Kevin Kling.