The Sugar Industry Shaped Government Research On Cavities. America’s reddest and bluest places. When 2015 rolls around and all the lame ducks have waddled off to K Street, over 180 of our 435 House districts will have something in common. 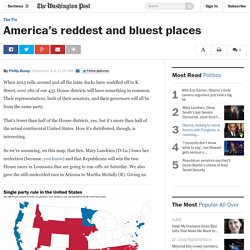 Their representatives, both of their senators, and their governors will all be from the same party. That's fewer than half of the House districts, yes, but it's more than half of the actual continental United States. How it's distributed, though, is interesting. So we're assuming, on this map, that Sen. Mary Landrieu (D-La.) loses her reelection (because, you know) and that Republicans will win the two House races in Louisiana that are going to run-offs on Saturday.

The places that are solid blue mostly hug the coasts (or, in the case of one of the Democrats' 100 percent blue states, are floating out in the Pacific Ocean). Republicans control Dixie, almost entirely. Coming soon: A campaign run entirely by super PACs. Three-quarters of the money spent on behalf of Chris McDaniel's failed bid for the Republican nomination for Senate in Mississippi came from outside political action committees (PACs). 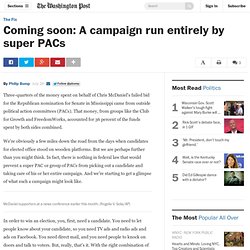 That money, from groups like the Club for Growth and FreedomWorks, accounted for 36 percent of the funds spent by both sides combined. We're obviously a few miles down the road from the days when candidates for elected office stood on wooden platforms. But we are perhaps further than you might think. In fact, there is nothing in federal law that would prevent a super PAC or group of PACs from picking out a candidate and taking care of his or her entire campaign. 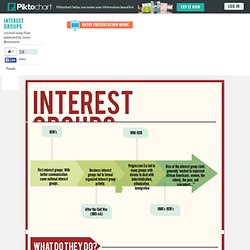 Business interest groups led to formal organized interest group activity. Progressive Era led to many groups with visions to deal with industrialization, urbanization, immigration Rise of the interest group state: generally "worked to represent African Americans, women, the elderly, the poor, and consumers. Single-Issue Solidarity Behind NRA's Clout : It's All Politics. Hide captionA visitor handles a revolver at a Smith & Wesson display during the NRA Annual Meetings and Exhibits on April 14 at America's Center in St. 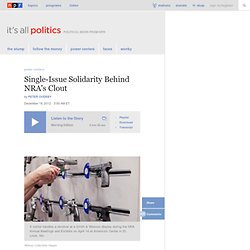 Louis, Mo. Whitney Curtis/Getty Images A visitor handles a revolver at a Smith & Wesson display during the NRA Annual Meetings and Exhibits on April 14 at America's Center in St. Louis, Mo. The National Rifle Association says it will hold a major news conference Friday — a week after the school massacre in Connecticut — and that it is "prepared to offer meaningful contributions to help make sure this never happens again. " The 4 million-member organization is known in Washington as a lobbying force so powerful, it quashed any gun control debate for nearly two decades. A Gun Control Demonstration On Tuesday, gun control advocates gathered outside the Capitol. The NRA’s influence — in 6 charts. Now that President Obama has formally unveiled his proposals to curb gun violence -- banning high capacity ammunition clips, a ban on assault weapons and universal background checks -- the fight now moves to Congress. 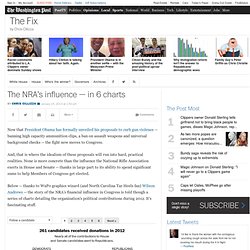 And, that is where the idealism of these proposals will run into hard, practical realities. None is more concrete than the influence the National Rifle Association exerts in House and Senate -- thanks in large part to its ability to spend significant sums to help Members of Congress get elected. Below -- thanks to WaPo graphics wizard (and North Carolina Tar Heels fan) Wilson Andrews -- the story of the NRA's financial influence in Congress is told though a series of charts detailing the organization's political contributions during 2012. Lobbying on taxes usually pays dividends.

If that crisis is averted, however, expect a more intense focus on the details of corporate tax reform, an issue that Congress is expected to take up once the cliff crisis subsides. Leaders in both parties say they’d like to simplify the tax code for businesses next year. President Obama and congressional Republicans support a compromise that would pay for lower corporate tax rates by eliminating loopholes and deductions in the code. Overall, businesses also cheer that move, but each of those tax breaks has specific companies and industries rooting for its survival. And those corporations that pour lobbying dollars into trying to control their tax bills usually benefit substantially, according to several new academic studies.

Civ_LP1%5B1%5D. Really, Would You Let Your Daughter Marry a Democrat? - David A. Graham. One Size Fits All? Reflecting on the Role of Government. Stephen Crowley/The New York TimesReporters surrounded Senator Mitch McConnell and Speaker John A. 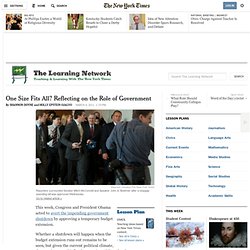 Boehner after a stopgap spending bill was approved Wednesday.Go to related article » This week, Congress and President Obama acted to avert the impending government shutdown by approving a temporary budget extension. Whether a shutdown will happen when the budget extension runs out remains to be seen, but given the current political climate, the core issues – chiefly, the question of the role of government and what programs and services should be prioritized – are as pressing as ever. Here are some ways to address these questions with your students in government, civics and other courses of study, starting with essential questions that underlie the main issues. Each suggested activity contains links to related resources from The New York Times and elsewhere. Essential Questions. Infographic of the Day: Do the Mainstream Media Have a Conservative Bias? - David A. Graham.