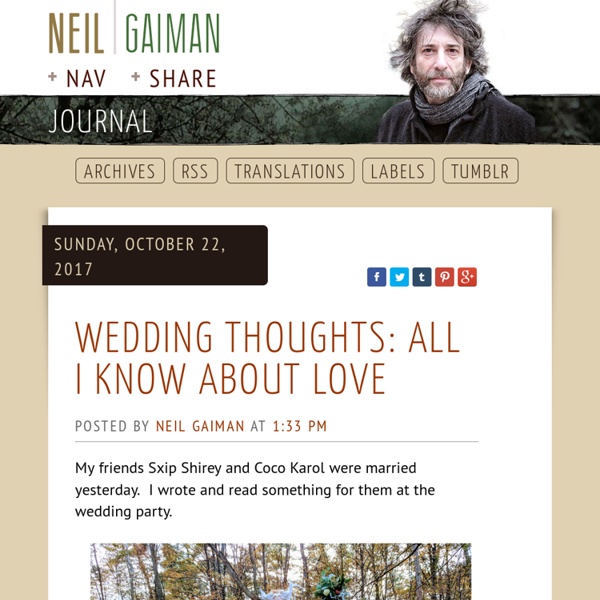 Poets.org - Poetry, Poems, Bios & More Brain Pickings Culture - Murillo and de Neve: The art of friendship Andrew Graham-Dixon examines the works of the 17th century painter Bartolomé Esteban Murillo on show at the Dulwich Picture Gallery in London. Murillo lived his whole life in Seville; records suggest he left it only once, in 1658. During the artist’s lifetime, plague, famine and crop failure all ravaged the city, halved its population and left the streets teeming with vagabonds and beggar children. Murillo encountered a life of personal hardship himself. De Neve used his considerable wealth to found religious sanctuaries for the needy, and in Murillo he recognised a painter capable of both sensitively capturing the plight of Seville’s poor and creating symbols of spiritual salvation through art. Murillo’s work has been derided in recent times as too “chocolate box” – but Andrew Graham-Dixon shows how the relationship with de Neve and their mutual desire to help the people of Seville adds a new perspective to the artist’s work.

s Plays Shakespeare's Plays Before the publication of the First Folio in 1623, nineteen of the thirty-seven plays in Shakespeare's canon had appeared in quarto format. With the exception of Othello (1622), all of the quartos were published prior to the date of Shakespeare's retirement from the theatre in about 1611. It is unlikely that Shakespeare was involved directly with the printing of any of his plays, although it should be noted that two of his poems, Venus and Adonis and The Rape of Lucrece were almost certainly printed under his direct supervision. Here you will find the complete text of Shakespeare's plays, based primarily on the First Folio, and a variety of helpful resources, including extensive explanatory notes, character analysis, source information, and articles and book excerpts on a wide range of topics unique to each drama. Tragedies Coriolanus (1607-1608) The last of Shakespeare's great political tragedies, chronicling the life of the mighty warrior Caius Marcius Coriolanus.

Academic Librarian | On Libraries, Rhetoric, Poetry, History, & Moral Philosophy In the words of Jim Anchower, I know it’s been a long time since I rapped at ya. For the past three years I’ve been trying to put my best library-related stuff into my Library Journal column, and the pressure of trying to come up with interesting stuff every month wore me out some. Since February I’ve been out of the rotation for the Peer to Peer Review column, and for the last three months have used the time I might have spent thinking about and writing that column reading philosophy and the occasional mystery novel. The publication of a blog post about avoiding library burnout from Letters to a Young Librarian gave me the incentive to write a bit about what I’ve been reading. The past few years I’ve been reading a lot about Stoicism, both the existing writings of the Stoics themselves–Seneca, Epictetus, and Marcus Aurelius–as well as a number of secondary books on Stoicism (I’ve included a selection at the end for anyone interested in further reading). 6) Cultivate apatheia. 9.

Poets & Writers | Contests, MFA Programs, Agents & Grants for Writers usable libraries PoemHunter.Com - Thousands of poems and poets. Poetry Search Engine Librarian in Black – Sarah Houghton Earlier this week, California Governor Jerry Brown appointed Greg Lucas as the new California State Librarian. The appointment requires state senate confirmation, which has not happened yet. Lucas is not a librarian, nor has he ever (per information readily available online) worked in a library, volunteered for a library, served on a library Board or Commission, or…well…had any involvement with libraries at all. So what has Lucas done? My Own Reaction My initial response on social media was in line with that of many librarians: “California’s new State Librarian isn’t a librarian. After the initial outcry, there was a backlash of people telling those of us with grumpy faces to hold on and stay positive. I stopped for a moment and reconsidered my position. We have heard nothing from Lucas or the Governor’s office about what qualifications, experience, or personal qualities Lucas possesses that made Brown tap him for this appointment. 19302. California Librarians’ Reactions My Final Thoughts