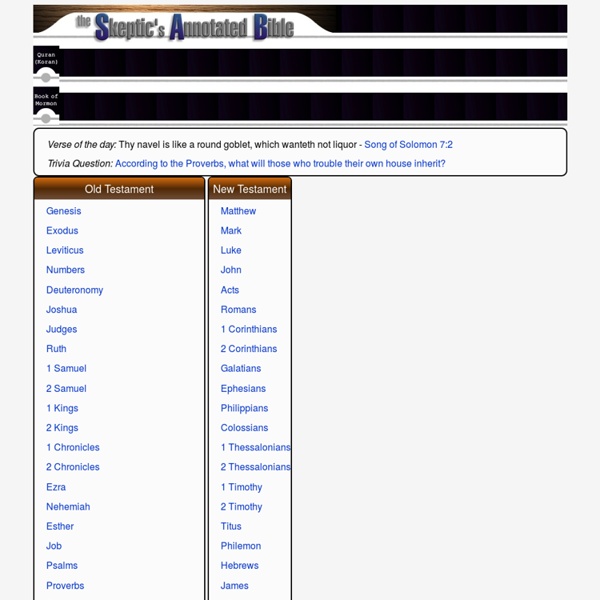 Born believers: How your brain creates God From New Scientist magazine 04 February 2009 by Michael Brooks Read our related editorial:The credit crunch could be a boon for irrational belief. WHILE many institutions collapsed during the Great Depression that began in 1929, one kind did rather well. During this leanest of times, the strictest, most authoritarian churches saw a surge in attendance. The Online Learning Blog from Study2U Supposedly browsing the internet requires more brain power than watching television. Although judging from some of the websites we’ve come across that assumption is cast into doubt. Here’s some of the sites we like that might get your brain to sit up and listen. Ted

Why Atheism Will Replace Religion Atheists are heavily concentrated in economically developed countries, particularly the social democracies of Europe (Barber, 2012). In underdeveloped countries, there are virtually no atheists . Atheism is thus a peculiarly modern phenomenon. Why do modern conditions produce atheism? First, as to the distribution of atheism in the world, a clear pattern can be discerned. In sub-Saharan Africa there is almost no atheism (Zuckerman, 2007). Fallacies  A fallacy is a kind of error in reasoning. The list of fallacies contains 209 names of the most common fallacies, and it provides brief explanations and examples of each of them. Fallacies should not be persuasive, but they often are. Fallacies may be created unintentionally, or they may be created intentionally in order to deceive other people. The vast majority of the commonly identified fallacies involve arguments, although some involve explanations, or definitions, or other products of reasoning. Sometimes the term "fallacy" is used even more broadly to indicate any false belief or cause of a false belief.

50 Atheist Quotes - Born Again Pagan 50 Atheist Quotes George Carlin 1. Religion easily has the best bullshit story of all time. The Quick 10: Little-Known Second Verses of Children’s Songs Either I had a really short attention span as a kid and never made it past the first verse of a song (which is entirely possible), or there are some obscure lyrics to the songs we all know and love. Here are a few examples. 1. I’m a Little Teapot. “I’m a clever teapot, Yes it’s true Here let me show you What I can do I can change my handle And my spout Just tip me over and pour me out!”

Hundreds of Proofs of God’s Existence NOTE: For real proofs of the nonexistence of any god, see "Why Atheism?" For other evidence, go to Atheists of Silicon Valley debate page . Hundreds of Proofs of God’s Existence Some Moral Dilemmas The Trolley Problem, not in Grassian. Suggested by Philippa Foot (1920-2010), daughter of Esther, the daughter of President Grover Cleveland, but of British birth because of her father, William Sidney Bence Bosanquet. A trolley is running out of control down a track. In its path are five people who have been tied to the track by a mad philosopher. Fortunately, you could flip a switch, which will lead the trolley down a different track to safety. Unfortunately, there is a single person tied to that track.

The Improbability of God The Improbability of God by Richard Dawkins from Free Inquiry, Volume 18, Number 3. Much of what people do is done in the name of God. Irishmen blow each other up in his name. Arabs blow themselves up in his name. 201 Ways to Arouse Your Creativity Arouse your creativity Electric flesh-arrows … traversing the body. A rainbow of color strikes the eyelids. A foam of music falls over the ears. Is God A Criminal? Table of Contents Introduction Does God stand above morality, defining for us what is moral and what is immoral in accordance with His will? Or is morality a characteristic that exists independent of what God wills to be moral or immoral?

Morality as Secular Mark S. Halfon, (2004, Nassau Community College) That there is a difference between religion and morality is uncontroversial. How, then, can atheism be interpreted as a moral alternative? Although religion and morality reflect different values, they are deeply intertwined for most individuals. Brief Anthropological Approach to the Study of Religion Anthropological studies of religion have long constituted some of the most important thinking in the development of religious studies as a field; to some extent, all major theorists of religion can be considered "anthropological" because they all in some way seek to compare and understand "religious" phenomena of various cultures. The anthropology of religion has often centered on those sociocultural elements that are frequently identified as religious: myths, rituals, magic, beliefs about gods and divine beings, taboos, and symbols. Introducing the Anthropology of ReligionThe history and theory of a number of movements in the anthropology of religion—including the theories of Marx, Freud, Weber, and Durkheim—are detailed in Brian Morris’s Anthropological Studies of Religion: An Introductory Text.

7 Innocent Gestures That Can Get You Killed Overseas If you've ever had your penis cut off and/or been executed while on holiday, you'll probably know that it's easy to offend people from other cultures. Unless you learn the ways of the place you're visiting, even the most well-meaning tourist can regularly find his oesophagus stuffed with burning goat. But surely just plain common sense and good manners will save you, right?