Someone Invented Magic And It Is Freaking Us Out 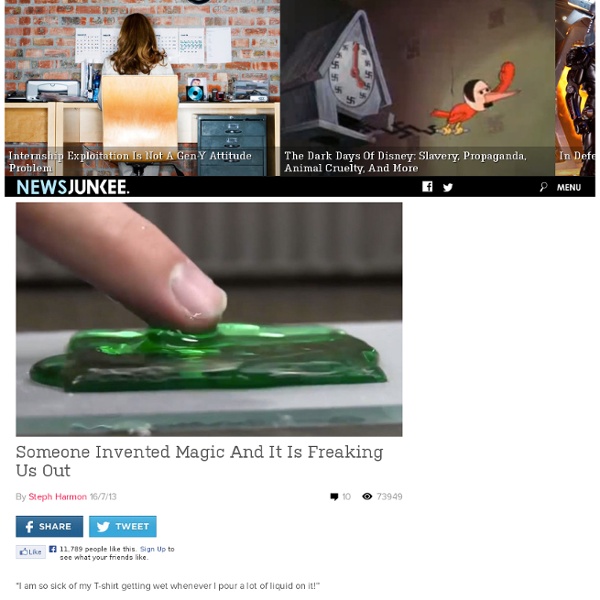 For more stories about ridiculous things, follow us on Facebook. - “I am so sick of my T-shirt getting wet whenever I pour a lot of liquid on it!” “I wish my iPhone 4 or 5 would not get so damaged every time I carefully place it at the bottom of a jug filled with water!” “My new white shoes have been stained by the chocolate sauce and mustard I squeezed on them earlier! What gives?!” “This cardboard box I chose to hold all of the water is just not doing a great job of it! These are all things you’re used to saying, but you will be saying them no longer! It is “a family of super hydrophobic coating that completely repels water and heavy oils,” and you can buy it online here for $20 a can. Couple questions left unanswered: A) What does it taste like? B) What does it feel like? C) How much cancer will it give me, and how quickly? D) What happens if you get it on your hands and then you want to wash it off your hands?

First ever sighting of a White Lady Spider - Animal Camera - BBC How Barack Obama Gets Things Done Forty-four American presidents have managed to navigate the complicated roles and responsibilities of the Executive Branch, each with his own style. But 21st-century presidents like Barack Obama face an especially daunting task. How can anyone get things done with 300 million bosses, a 24-hour news cycle of critics, and a to-do list that is often life or death? Thanks to the fantastic journalism of Michael Lewis of Vanity Fair, Ryan Lizza of The New Yorker, and others, we were able to assemble a detailed portrait of how a modern-day president like Barack Obama works. Here are some particularly useful productivity tips from our current commander-in-chief. 1. “In a funny way,” writes Michael Lewis, “the president’s day actually starts the night before. After his family retires to bed, Obama often stays up working on odds and ends left over from the day. For example, after he won the Nobel Peace Prize, his staff submitted several acceptance speeches that Obama deemed unusable. 2. 3. 4. 5.

Readily Available Chemicals With the War on Drugs, the War on Terror, Draconian health and safety regulations and an increasing fondness for litigation, most laboratory chemicals are out of reach to those without a professional reason to use them. However, many chemicals with "everyday" uses are still available. This site gives an outline of chemicals that can be bought by private individuals and the companies that sell them. Contents List of Inorganic Chemicals List of Organic Chemicals List of All Suppliers The List and How to Use It This list should be regarded as a guideline, rather than a fully comprehensive directory of chemicals. The given suppliers are only those that I happen to know of. Unfortunately, the lists of suppliers are heavily biased towards Britain and America. For many chemicals, multiple sources are given. Another way of effectively using the list, is to match your needs to what is available. The lists define organic chemicals to be those having a carbon-carbon or a carbon-hydrogen bond.

Top 10 Lies Taught To Us in School A school is a place that teaches knowledge, prepares children for their professional life and enables them to compete with the challenges they may face in future but sometimes, part of the information is not true. Here is a list of top 10 lies which are taught in the schools. 10. The Blue color of the Deoxygenated Blood The veins inside our wrist appear blue and we are taught in our schools that the color of impure blood in our veins is blue. 9. 13 Original Colonies of America There are thirteen stripes in American flag which apparently represents America’s 13 original colonies in. 8. A strong myth about glass that says glass is actually a liquid which moves at a very low speed. Popular on the Web

Black Powder: Potassium Nitrate Note: There really are much easier ways of getting hold of this stuff. When I was a kid it came in decent quantities in chemistry sets. But if you insist on playing James-Bond-behind-enemy-lines, then give this a shot. I’ve sure as hell never tried it. — Tooch Potassium nitrate can be extracted from many natural sources and can be used to make nitric acid, black powder and many pyrotechnics. Note: Only the ratios of the amounts of ingredients are important. Procedure Punch holes in the bottom of the bucket.

16 Anti Theft Gadgets and Designs to Deter Thieves 16 Anti-Theft Gadgets and Designs to Deter Thieves We all own many different cool gadgets and items that are important to us either for the utility they provide or perhaps because of an intimate or personal reason. Whatever the reason is, we really hate it when someone comes and touches our personal belongings and worst yet…steals them. In order to avoid such mishaps and unfortunate events, we have gathered here a great collection of different Anti Theft Gadgets and Bizarre Designs that are meant to help individuals make their devices and belongings less attractive, appealing or desired to a normal bystander. Moreover, there are a few security gadgets and projects that may also interest the more techy of you, who may be looking for some new gizmos to own or security diy to built. The following aren’t guaranteed to deter thieves or work colleagues from getting at your gadgets but are meant as additional things to make them think a second time before getting at your personal stuff. 1. Source