IMDB Top 250 Movies of All Time 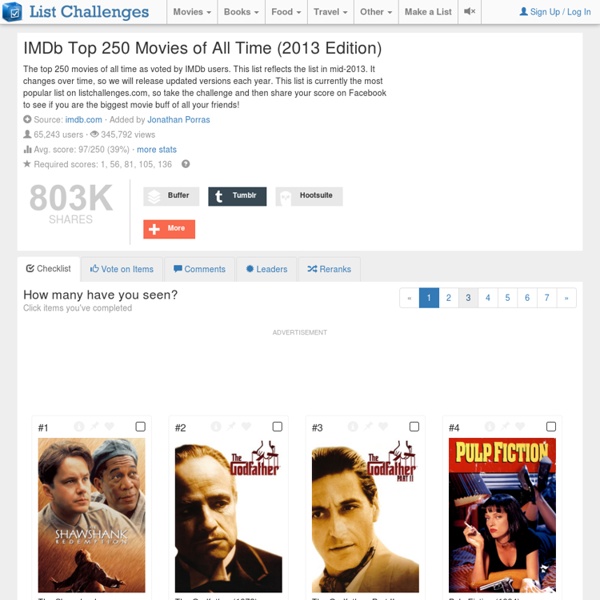 What Happened To The The Lord Of The Rings Characters After The Movies (23 pics) Pics | 19 Mar, 2015 | Views: 8397 | Have you ever wondered what happened to your favorite characters from "Lord of the Rings" and "The Hobbit" after the movies ended? You're about to find out Complete List of Walt Disney Movies 191,962 users · 1,029,558 views Required scores: 1, 106, 142, 178, 223 How many have you seen? Joseph Kony Joseph Kony (pronounced IPA: [koɲ];[7] born sometime between July and September 1961)[1] is the leader of the Lord's Resistance Army (LRA), a guerrilla group which used to operate in Uganda. While initially purporting to fight against government suppression, the LRA allegedly turned against Kony's own supporters, supposedly to "purify" the Acholi people and turn Uganda into a theocracy.[2] Kony proclaims himself the spokesperson of God and a spirit medium, and has been considered by some as a cult of personality, and claims he is visited by a multinational host of 13 spirits, including a Chinese phantom.[2] Ideologically, the group is a syncretic mix of mysticism, Acholi nationalism, Islam, and Christian fundamentalism, and claims to be establishing a theocratic state based on the Ten Commandments and local Acholi tradition.[8][9][10][11][12][13][14][15][16][17][18][19] Biography Early life

115 of the Best Modern Comedies Will Ferrel, Zach Galifianakis, Seth Rogan, Jonah Hill, Jim Carrey, John Goodman, Chris Farley, John Candy, Mel Brooks, Robin Williams, Steve Carell, Bill Murray - these are only a handful of the masters of modern comedy films. Are you a comedy buff? 16,874 users · 434,113 views Required scores: 1, 31, 47, 63, 79 Georgiy Gongadze Georgiy Ruslanovich Gongadze (Ukrainian: Георгій Русланович Ґонґадзе, Heorhiy Ruslanovych Gongadze; Georgian: გიორგი ღონღაძე; 21 May 1969 – 17 September 2000[1]) was a Ukrainian journalist of Georgian origin who was kidnapped and murdered in 2000. Gongadze's widow Myroslava Gongadze and their two children received political asylum in the United States and have lived there since 2001. Gongadze was awarded the title Hero of Ukraine by President Viktor Yushchenko on 23 August 2005.[7] Career[edit] A memorial plate in Kiev listing journalists who were killed while reporting. Born in Tbilisi, at the time the capital of the Georgian Soviet Socialist Republic of the Soviet Union, Gongadze was the son of a Georgian politician father and a Ukrainian nurse mother.

Iconic Game Of Thrones Locations That You Can Actually Visit (28 pics) Category: Pics | Today, 00:02 | Views: 2033 | +3 | "Game of Thrones" might be a fantasy show, but the locations used are very real. They may have fictional names in the show, but you can visit many of the places you see while on "Game of Thrones" in real life. Find out how to get to your favorite location from the show. The road to King’s Landing – Dark Hedges, Northern Ireland

6 Ways to Be Happier at Work This Summer This post originally appeared on the American Express OPEN Forum, where Mashable regularly contributes articles about leveraging social media and technology in small business. For most of us, more of our waking hours are spent at work than anything else. In fact, the average American spends approximately 100,000 hours at work over the course of their lifetime. That stat alone is a pretty sobering reminder about just how important it is to be happy at work. There is no dream job. The novelty and excitement of that once-perfect opportunity tends to wear off after the first year, as we become focused on a few less-than-optimal aspects of our co-workers, boss, tasks, and so on.

Desmond Tutu Desmond Mpilo Tutu (born 7 October 1931) is a South African social rights activist and retired Anglican bishop who rose to worldwide fame during the 1980s as an opponent of apartheid. He was the first black Archbishop of Cape Town and bishop of the Church of the Province of Southern Africa (now the Anglican Church of Southern Africa). Tutu's admirers see him as a man who since the demise of apartheid has been active in the defence of human rights and uses his high profile to campaign for the oppressed. He has campaigned to fight AIDS, tuberculosis, poverty, racism, sexism, the imprisonment of Chelsea Manning, homophobia and transphobia.

20 Classic Movies You Definitely Have To Watch At Least Once (20 pics) Category: Pics | Today, 00:03 | Views: 3303 | +11 | These classic films never go out of style. 12 Angry Men (1957) - Set in one jury room, with twelve disgruntle jurors, the unraveling of what people believe to be truth and justice is put on the table. Henry Fonda plays Juror 8, the only man who thinks the young inner city boy, who is accused of stabbing his father, is innocent. Over the course of the day, he tries to convince the other men that there are way too many discrepancies with the story to convict the teen. Lawrence of Arabia (1962) - With it’s runtime of 227 minutes, Lawrence of Arabia was one of the first and greatest epics in cinema.

The Last Day on the Twin Peaks Set (24 pics) Pics | 28 Oct, 2011 | Views: 7177 | The last episode of Twin Peeks aired 20 years ago. These are photos of the final day on the Twin Peaks set. Do you like it? It is just one of the thousands of posts that we have on the Acidcow.com. Fethullah Gülen Muhammed Fethullah Gülen (born 27 April 1941) is a Turkish preacher,[4] former imam,[4][5] writer,[6] and Islamic opinion leader. He is the founder of the Gülen movement (sometimes known as Hizmet). He currently lives in a self-imposed exile in Saylorsburg, Pennsylvania, United States.[7][8][9] Gülen teaches an Anatolian (Hanafi) version of Islam, deriving from Sunni Muslim scholar Said Nursî's teachings. Gülen has stated that he believes in science, interfaith dialogue among the People of the Book, and multi-party democracy.[10] He has initiated such dialogue with the Vatican[11] and some Jewish organizations.[12]

These are best sci-fi movies you should be watching Great sci-fi movies deal with the future, big ideas and (quite frequently) how something in space will try and kill you. If Blade Runner 2049 has reignited a passion for brilliant sci-fi, our list has something to keep it burning. We'll leave the arguments about what the best sci-fi movies of all time are to someone else, so here are the best ones currently available on UK streaming services Netflix, Amazon Prime and on Now TV / Sky. 35+ Actors Who Underwent Dramatic Transformations For A Role Natalie Portman endured a punishing schedule for her role as a ballerina in Black Swan, which left her fearing she was going to die. The waif-like 29-year-old lost 20lb for the role, eating little more than carrots and almonds on a punishing diet, and spent eight hours a day in rehearsals. Ms. Portman, who won an Oscar for her portrayal of the desperately ambitious, perfectionist dancer, said: "There were some nights that I thought I literally was going to die."