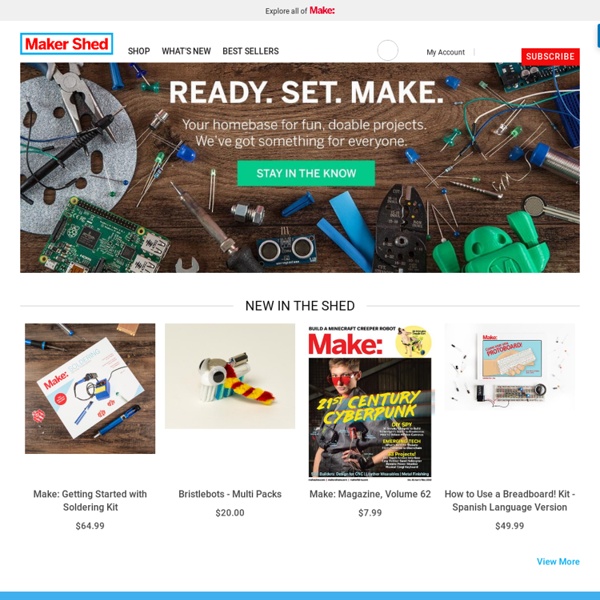 Python et GPS Tracking Python and GPS Tracking Skill Level: Advanced by a1ronzo | December 17, 2012 | 17 comments Which Board is Right for Me? For a few months after Raspberry Pi came out, the choice was pretty simple. If you wanted to talk to arbitrary electronics, your best bet was to buy an Arduino microcontroller board; if you needed the power of an ARM-based processor to run Linux, the Raspberry Pi single-board computer (SBC) was the obvious choice (that is, if you could get your hands on one. Delivery issues are mostly resolved, but last year some people waited more than six months for their Pi). Before Arduino and Raspberry Pi, things were more complicated. Going forward, things aren’t just complicated again — they’re bewildering.

playground - ArduinoUsers :: Exhibition :: The place to share and show off projects Until someone finds a way to categorize what is here, be sure to remember that your browser has a "find in this page" tool (ctrl-F in Firefox) which can help you find what you are looking for! Arduino user projects How Did I Improve My Central Heating Control with Arduino? Maker creates a Steampunk-inspired 3D printer A 3D printer suited for the Wild West. First coined by author K. W.

5 steps for creating a custom makerspace By Laura Fleming April 14th, 2015 Start your makerspace on the right foot with these steps A couple of years ago, my son won an award in preschool for being “Eager to Learn.” I remember having such mixed emotions on the day he won the award. Of course I was beyond proud of him, but I also could not help but wonder if his schooling would allow him to carry and sustain that innate zeal for learning with him as he came to face the rigors of the Common Core and standardized testing. It was about this time that I began my job as media specialist at New Milford High School, and my own worries about my son, combined with New Milford’s desire to reinvigorate their school library, made me more passionate than ever about forging schools that work for kids.

Tutoriel Python et GPS Tracking - Nouvelles by a1ronzo | December 27, 2012 | 12:12 am | 16 comments Share Use this URL to share: Share on Twitter Share on Facebook Share on Google+ If you have ever programmed a microcontroller, you are probably familiar with sending and receiving data over a serial port. A common way to do this is with a serial terminal program (hyperterminal, Arduino serial monitor, etc.). Lets say you want to create your own serial terminal program that displays data from a microcontroller in a meaningful way. For example, graphing temperature over time or displaying GPS position on a map.

10 Best Electronics Suppliers First off, I would like to give notice to Electronics Projects for Dummies for most of this info. I wanted to make a site with many of the best sites to buy Electrical Parts, because it can sometimes be a strenuous activity. I have 10 here, because if you can't find something on one online store, you might be able to find it on the next. Reynolds ElectronicsReynolds Electronics is a good supplier of remote control components, micro controllers, and robot kits and parts. One feature that stands out on Reynolds Web site is the clear and helpful project/circuit tutorials. The Electronic Peasant's Guide to Fun and Profit with Electronic The Electronic Peasant likes to get more enjoyment from DIY for less money, and sometimes uses obsolete parts as well. Salvaging old equipment can provide many important parts at little or no cost. And it's environmentally friendly to save this stuff from going to the landfill! There's gold in them there things!!! Older equipment like this is being disposed of in huge quantities, available for free or very inexpensively.

megaAVR powers this Steampunk VFD wristwatch Maker John De Cristofaro recently devised a Steampunk-inspired wristwatch powered by an ATMega88 microcontroller (MCU). Dubbed the ChronodeVFD, the wearable device is built around a IVL2-7/5 VFD display tube. “I originally purchased a few of these tubes to build a standard desk clock, but after playing around with them, I realized I could probably build a wristwatch too,” the Maker writes. De Cristofaro notes some of the features which made the tube well-suited for this purpose, including its size (only 1.25″ x 2.25″), its flatness making for a sleeker watch design, its low-grid voltage (12-13V), as well as its nominal 60mA filament current at 2.4V. “One other feature that I like about this device is that unlike nearly every other VFD tube, the IVL2-7/5 has no opaque or diffuse backing behind the digits.

Why The Maker Movement Matters I get caught up in things. Informercials. New gadgets. New shades of Sharpie. Sockets de serrage sur le câble ruban It's a good idea to use sockets and header pins when working with ribbon cable. They make your projects more modular, portable, and able to be assembled and disassembled rapidly. You can get 16 stranded ribbon cable, sockets, and male header pins at Jameco: 16 conductor ribbon cable Jameco 28RC16-10VP 16 pin right angle connector Jameco 746285-3 male header pins Jameco 103393 Thread the ribbon cable into the socket and push the socket together with your hands until the metal pins start to touch the ribbon. LED Throwies LED throwies consist of only a few inexpensive parts and can be made for ~$1.00 per Throwie. You can reference the parts list below or download the attached spreadsheet for more info on parts, part's numbers, vendors and application notes. Part: 10mm Diffused LED Vendor: HB Electronic Components Average cost: $0.20 avg per LED Notes: Cost reductions for larger quantities. Comes in red, blue, amber, white in both diffused and clear. Diffused works better than water clear for the Throwie application.