How to Memorize Things Quickly 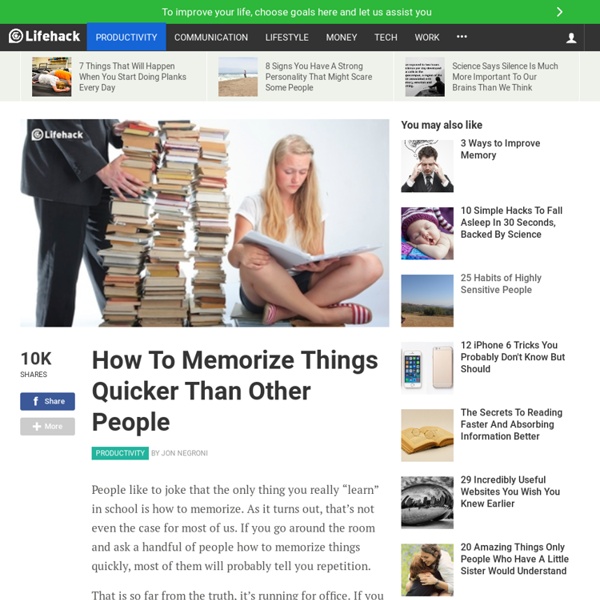 People like to joke that the only thing you really “learn” in school is how to memorize. As it turns out, that’s not even the case for most of us. If you go around the room and ask a handful of people how to memorize things quickly, most of them will probably tell you repetition. That is so far from the truth, it’s running for office. If you want to memorize something quickly and thoroughly, repetition won’t cut it; however, recalling something will. The problem is that recalling something requires learning, and we all learn in different ways. Before we start, you need to establish something: are you an auditory, visual, or experiential learner? Step 1: Preparation To optimize your memorization session, pay close attention to which environment you choose. Next, start drinking some tea. As we get older, toxic chemicals will damage our neurons and synapses, leading to memory loss and even Alzheimer’s. Step 2: Record What You’re Memorizing Step 3: Write Everything Down Step 9: Take a break

Time Assets vs. Time Debts: A Different Way of Thinking About Productivity Late in his career, Steve Jobs famously drove his car without a license plate. There were all sorts of theories about why Jobs decided to drive without tags. Some people said he didn’t want to be tracked. Others believed he was trying to make a game of avoiding parking tickets. Jon Callas, a former computer security expert who worked for Apple, revealed a different reason. How to Study Less by Learning Things Once You read over your notes. Then you read them over again. Then you read them over a third time.

mental_floss Blog & 8 Fairy Tales And Their Not-So-Happy Endings by Stacy Conradt, Laurel Mills & John Green You might have noticed from an earlier post that I'm a bit of a Disney buff. This is kind of out of character for me, to be honest, because I'm not a huge fan of happily ever after. I like movie endings that are unexpected. After doing a little research, though, I realized that maybe fairy tales and I are a perfect match: those Disney endings where the prince and the princess end up blissfully married don't really happen in the original stories. To make sure kids go home happy, not horrified, Disney usually has to alter the endings. How To Learn Without Memorizing Photo by Edwin Stemp Rote memorization is an inefficient way to learn. Just retaining a single formula can mean pounding the same information into your skull dozens of times. If your computer hard drive had this accuracy, you’d probably throw it out. Unfortunately, you’re stuck with your brain. The good news is that you don’t need to learn by memorization.

Verbal Working Memory Assessment - Cambridge Brain Sciences The digit span task exercises your verbal working memory. Scientists refer to working memory as the cognitive system that allows the temporary storage and manipulation of information. According to one influential cognitive theory, this system has specialised components, one of which, the 'phonological loop', underlies verbal working memory abilities (Baddeley & Hitch 1974).

Process Improvement: This Coach Improved Every Tiny Thing by 1 Percent In 2010, Dave Brailsford faced a tough job. No British cyclist had ever won the Tour de France, but as the new General Manager and Performance Director for Team Sky (Great Britain’s professional cycling team), Brailsford was asked to change that. His approach was simple. Brailsford believed in a concept that he referred to as the “aggregation of marginal gains.” Sleeping Beauty Syndrome: The Disorder Where You Sleep All Day Dan Lewis runs the wildly popular daily newsletter Now I Know (“Learn Something New Every Day, By Email”). To subscribe to his daily email, click here. Fairy tales made their way into the modern literary sphere when French author Charles Perrault published Histoires ou contes du temps passé in 1697 (literally, “Stories or tales of times past”). Histoires was a collection of stories that quickly permeated our culture, including the now-famous Cinderella, Puss in Boots, Little Red Riding Hood, and Sleeping Beauty. Whatever basis Perrault’s stories have in reality are quite tenuous at best — one doesn’t see pumpkins-as-chariots, swashbuckling cats, or wolves wearing grandma’s bed clothes in the real world.

25 Killer Websites that Make You Cleverer It’s easy to forget that we have access to a virtually limitless resource of information, i.e. the Internet. For a lot of us, this is even true at our fingertips, thanks to the ubiquity of smartphones and an ever-increasing push for online greatness by tech engineers all over the world. As a result, there are countless websites out there that are geared to make you smarter and more brilliant for either a low or no cost. Here are just 25 killer websites that may just make you more clever than ever before. 1. Duolingo Visual Spatial Span Assessment : Cambridge Brain Sciences The spatial span task exercises your visuospatial working memory; the component of working memory that allows you to temporarily hold and manipulate information about places. Many everyday activities involve visuospatial working memory, including finding your way around your environment, judging the position of other motorists while you are driving and searching for your keys. According to one very influential cognitive model of working memory (Badderly & Hitch, 1974) visuospatial working memory depends on a specialised sub-component of the working memory system. This is referred to as the â€˜visuospatial sketchpadâ€™ and is thought to have a visual â€˜cacheâ€™, responsible for storing visual form and colour information, and an â€˜inner scribeâ€™ which deals with spatial and movement information. This task places significant demands on the inner scribe.

Forget About Setting Goals. Focus on This Instead. We all have things that we want to achieve in our lives — getting into the better shape, building a successful business, raising a wonderful family, writing a best-selling book, winning a championship, and so on. And for most of us, the path to those things starts by setting a specific and actionable goal. At least, this is how I approached my life until recently. I would set goals for classes I took, for weights that I wanted to lift in the gym, and for clients I wanted in my business. What I'm starting to realize, however, is that when it comes to actually getting things done and making progress in the areas that are important to you, there is a much better way to do things.

Related:  akielsgard
Related:  Productivity   -  Articles I am interested in   -  Eye Direction and Lying - How to detect lies from the direction of an individual's gaze / visual accessing cues.   -  Develop Perfect Memory With the Memory Palace Technique - Litemind   -  How to Study Less by Learning Things Once   -  Temporarily Disabled   -  Learn fast and forget about forgetting   -  Divine Cosmos   -  How to Develop a Photographic Memory | eHow   -  3 Ways to Lucid Dream   -  Art of memory - Wikipedia, the free encyclopedia   -  Theory of everything   -  How to Learn Without Memorizing   -  Detect Lies Like LIE TO ME! - Scam School - YouTube   -  Mentat Wiki: Home Page   -  Twelve Things You Were Not Taught in School About Creative Thinking   -  How to Adopt a Polyphasic Sleep Schedule: 4 Steps (with Pictures)   -  6 Real People With Mind-Blowing Mutant Superpowers | Cracked.com   -  IBA - World's Toughest Motorcycle Riders   -  How to Train Your Brain and Boost Your Memory Like a USA Memory Champion   -  6 Ways to Enhance Your Problem Solving Skills   -  The Official Site of HistoryTeachers   -  Attack Magazine - Dance music production and culture   -  Lateral Thinking Puzzles - Preconceptions   -  Master of Rigging on Vimeo   -  Lucid Dreaming Techniques: A Guide To Lucid Dream Induction   -  ECO agricultor - Agricultura Ecológica, Agroecología, Huerto   -  The Method of Loci - How to Improve Your Memory | HowStuffWorks   -  LOCI Method of mnemonic memory technique   -  Your Memory Palace: Method of Loci   -  Improve Your Memory with The Chunking Technique   -  GameArtisans   -  Download Free Sound Effects   -  Chrome Web Store - Superbe capture d'écran : capturer et annoter