Twelve Things You Were Not Taught in School About Creative Thinking 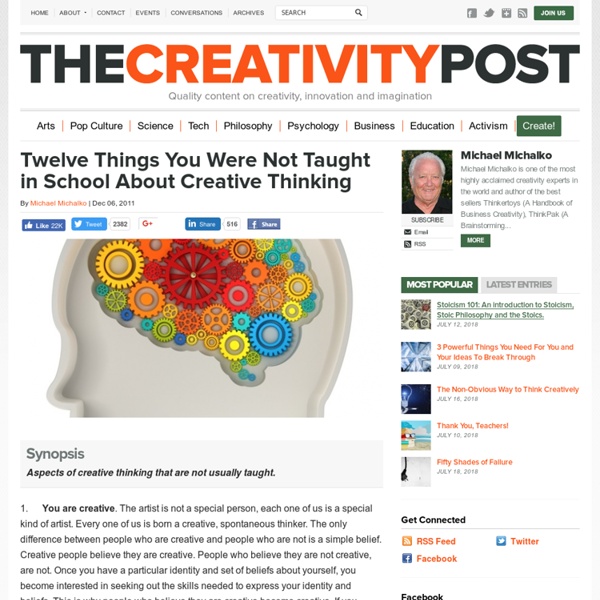 10 Free Tools For Creating Your Own Maps Maps are handy for a lot of reasons. Not only do they help us navigate through certain areas, they also enable us to learn more about the world and what it has to offer. What if you’re someone who wants to create a map instead? Sure, there’s Google Map and Google Earth to help you out but there are actually other tools to choose from as well. Here we’ve gathered 10 free amazing tools that you can use to create your own maps. How to Build Self-Discipline Discipline is freedom. You may disagree with this statement, and if you do you are certainly not alone. For many people discipline is a dirty word that is equated with the absence of freedom. In fact the opposite is true. As Stephen R.

Repetition compulsion - Wikipedia Repetition compulsion is a psychological phenomenon in which a person repeats a traumatic event or its circumstances over and over again. This includes reenacting the event or putting oneself in situations where the event is likely to happen again. This "re-living" can also take the form of dreams in which memories and feelings of what happened are repeated, and even hallucination. The term can also be used to cover the repetition of behaviour or life patterns more broadly: a "key component in Freud's understanding of mental life, 'repetition compulsion'...describes the pattern whereby people endlessly repeat patterns of behaviour which were difficult or distressing in earlier life

Teaching and Learning Resources / Learning Theories Key Concepts Behaviorism is a theory of animal and human learning that only focuses on objectively observable behaviors and discounts mental activities. Behavior theorists define learning as nothing more than the acquisition of new behavior. Experiments by behaviorists identify conditioning as a universal learning process. There are two different types of conditioning, each yielding a different behavioral pattern:

Mr. DeMaio A fun filled science lesson for kids all about earthquakes. Learn what causes an earthquake as well as a bunch of helpful information about them. Safe for children and a lot of laughs! Please consider contributing to my Patreon. Doing so helps me make more videos like this one! Exploring Abandoned NYC Exploring Abandoned NYC Steve Duncan is a modern day archaeologist, an “urban historian” who employs a rare practice to catalog the history of New York City. Duncan and his videographer partner Andrew Wonder explore the abandoned past of New York below the city streets– from the subway tunnels of yesteryear to the peaks of the city’s bridges. The duo runs through active subway tunnels, climbs through sewers over rushing water, scales massive bridges and does so without detection. Our adoration of abandoned places is no secret here, and we’re certain you’ll be amazed at this 30 minute video. It is at once thrilling and educational, a dangerous look at one man’s quest to document a world below our feet that most could not imagine.

7 Deadly Sins of Creativity Email Creativity is not just for artists and poets. Everybody has the potential to exercise their creative mind – to innovate new ways of accomplishing things that will ultimately make life easier and more gratifying. Creativity magnifies the effectiveness of our natural talents, generating elevated levels of success and happiness by helping us discover more efficient ways to do what we love to do. Happiness is not in the mere possession of money; it lies in the joy of achievement, in the thrill of creative effort. - Franklin D. Roosevelt

5 Things People Don't Get About Borderline Personalities Photodisc/Photodisc/Getty Images Considering movies tend to portray us as violent stalkers (or at the very least, out-of-control whirlwinds of emotional destruction), it's easy to lump BPD sufferers in with sociopaths or other groups that lack basic human empathy. But more recent studies suggest that we actually just have way too much of it. Since you're constantly assessing the emotional state of the people around you (primarily because it's all your fault, and oh god you have to fix it), people with borderline personality disorder kind of have people-reading superpowers. The Best Tools and Apps for Flipped Learning Classroom July 25, 2014 Following the posting of "Managing iPad Videos in Schools" somebody emailed me asking about some suggestions for tools and apps to create instructional videos to use in a flipped learning setting. In fact, over the last couple of years I have reviewed several web tools and iPad apps that can be used in flipped classroom but the ones I am featuring below are among the best out there. 1- Educlipper Educlipper is a wonderful tool for creating video tutorials and guides to share with students. As a teacher you can create an Educlipper board for your class and share the link with them. Now that you have a shared space with your students, you can go about creating instructional videos using the iPap app of Educlipper.

How One School Creatively Boosted Student Achievement Mr. DeMaio and other teachers star in a video about times tables. It’s not only at Halloween time that the Memorial School students in Union Beach, New Jersey, see their teachers in costumes.

Related:
Related:  Educational Technology   -  ideas   -  WRITING   -  Mental Health   -  Keep Calm and get ready for the Bac   -  Eye Direction and Lying - How to detect lies from the direction of an individual's gaze / visual accessing cues.   -  How to Study Less by Learning Things Once   -  Online curriculum centre   -  3 Ways to Lucid Dream   -  Detect Lies Like LIE TO ME! - Scam School - YouTube   -  10 Reasons You Should Never Get a Job   -  How to Adopt a Polyphasic Sleep Schedule: 4 Steps (with Pictures)   -  6 Real People With Mind-Blowing Mutant Superpowers | Cracked.com   -  Google   -  Elearning examples -- infographics, simulations, and online courses   -  Apps in Education: Early Childhood Education and the iPad   -  Personalized Professional Learning for Education | hoonuit by Atomic Learning   -  How to Train Your Brain and Boost Your Memory Like a USA Memory Champion   -  Search the citations of other students: EasyBib: Free Bibliography Maker - MLA, APA, Chicago citation styles   -  Draw a Stickman   -  Change a Habit in Three Steps with This Flowchart   -  Get popular free downloadable tools to use in the classroom   -  Teacher Development: Starter Kit for Teaching Online   -  Table of Contents   -  Lucid Dreaming Techniques: A Guide To Lucid Dream Induction   -  Home | Archive of Our Own   -  EDUCAUSE Homepage   -  TEDxStanford - Tina Seelig - A crash course in creativity - YouTube   -  Personal Learning Environments and the revolution of Vygotsky’s Zone of Proximal Development   -  13 Evidence-Based Medicinal Properties of Coconut Oil   -  15 Free Learning Tools You've Probably Never Heard Of   -  Teachers toolbox - Professor John Hattie's Table of Effect Sizes   -  Why (And How) You Should Create A Personal Learning Network | Edudemic   -   IPAD 4 SCHOOLS | MAKING SIMPLE SENSE OF IPADS IN SCHOOLS   -  40 Quick Ways To Use Mobile Phones In Classrooms | Edudemic