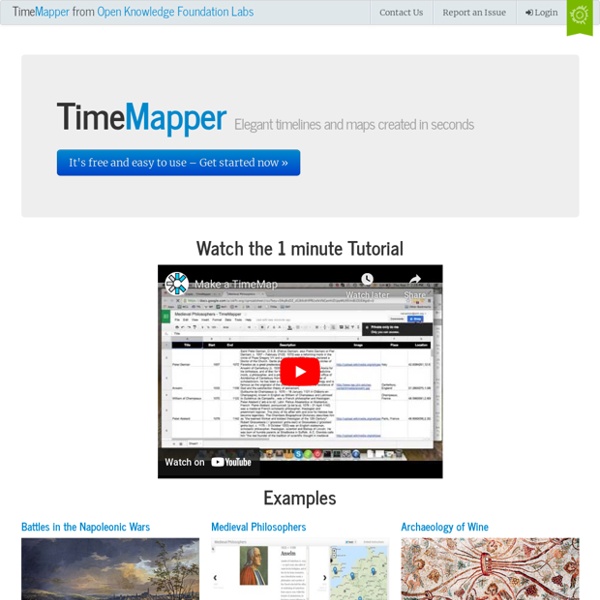 Journey Map JourneyMap is a JavaScript library for the Leaflet.js mapping platform. The library can help you create a story map where interactions on the map are triggered as the user scrolls down the page. This demonstration map shows you some of the interactions you can create with the library. The demo shows how you can add a marker to the map, move the map to a different location and zoom in and out on the map. Earth Outreach Before You Begin In order to complete this tutorial, you will need some text, photo and video content to add to your tour. You can use your own text, photos and videos, or you can use the sample content provided by our friends at the Jane Goodall Institute (JGI). Just download the zip file below and extract the contents to a folder on your desktop. Tour_Builder_JGI_sample_content.zip (530k Zip file)

Argunet Editor - Argunet Argunet Editor is a free argument map editor for analyzing and visualizing complex debates. You can use it offline and save your debates on your hard-disk. Or you can use it as a client-server application. Historical maps home page Down to: 6th to 15th Centuries | 16th and 19th Centuries | 1901 to World War Two | 1946 to 21st Century The Ancient World ... index of places Aegean Region, to 300 BCE Storytelling with Google Maps Getting started with Google Maps Whether you're highlighting shelter locations during a flood or setting the scene in a broadcast story, a map can be a great vehicle to share information with your audience. Use this site to help you get started with Google's mapping tools—from interactive web maps to HD Google Earth animations for television. Sign up for our mailing listStay up to date on the latest Google Maps and Google Earth tools relevant to journalists, including new crisis maps, fresh satellite imagery and more: Sign up for our Google Group. Get in touchE-mail the Google News Lab at mediatools@google.com.

Hit On Head By Falling Baby - Twice! Hit On Head By Falling Baby - Twice! There once was a man hit on the head by a fallingbaby, twice! According to Time Magazine, the first event occurred in 1937. Joseph Figlock, a local street sweeper in Detroit, Michigan, was walking down the road when a baby fell from a 4th story window. The baby landed on Joseph's head and shoulders. OpenStreetMap Where is this? Reverse Directions Welcome to OpenStreetMap! OpenStreetMap is a map of the world, created by people like you and free to use under an open license. 35 Awesome Apps that Integrate with Google Classroom Save Pinterest Google Classroom Apps! Did you know that Google Classroom plays well with others? Yep! Google is known for making their applications open to working with third-party applications, and Google Classroom is no exception. Are you using Google Classroom?

Download 91,000 Historic Maps from the Massive David Rumsey Map Collection Three years ago, we highlighted one of the most comprehensive map collections in existence, the David Rumsey Map Collection, then newly moved to Stanford University. The Rumsey Collection, we wrote then, “contains a seemingly inexhaustible supply of cartographic images”—justifiable hyperbole, considering the amount of time it would take any one person to absorb the over 150,000 physical artifacts Rumsey has amassed in one place. By 2016, Rumsey had made almost half the collection—over 67,000 images—freely available in a digital archive that has been growing since 1996. Each entry features high-resolution scans for specialists (you can download them for free) and more manageable image sizes for enthusiasts; a wealth of data about provenance and historical context; and digital, user-friendly tools that use crowd-sourcing to measure the accuracy of antiquated maps against GPS renderings. To make this document even more compelling, it contains its own bibliography. Related Content:

Exes Explain Ghosting, the Ultimate Silent Treatment “It happens to me so often that I’ve come to expect it,” Ms. Bylo said. “People don’t hold themselves accountable anymore because they can hide behind their phones.” Elena Scotti, 27, a senior photo editor and illustrator at Fusion, the media company, has also been a victim of ghosting. She once flew to Chicago to attend and spend time with a man she had fallen for while studying abroad. “We were inseparable,” Ms. Custom Google Maps Style Tool A tool for playing around with Google Maps colours and generating the styling code. The generated Google Maps code can be copied from the bottom of the page. Colours can be controlled with sliders below or by entering a hex value. Tags: api, custom, google maps, maps, styles

Adobe Spark in the Classroom Adobe Spark is partnering with NASA. The 2019 NASA OPTIMUS PRIME Spinoff Promotion and Research Challenge (OPSPARC) is asking students to ignite their creativity and thinking using Adobe Spark. See more details below and learn how students can participate. Learn More "About Mee" by Nahveyah (7th grade) "Mix & Match" by Will (12th grade) Res Obscura: The Most Wonderful Map in the World: Urbano Monte's Planisphere of 1587 At some point in 1589, a Milanese cartographer named Urbano Monte made up his mind: his self-portrait needed updating. Monte carefully crouched over the section of his map that bore his self-portrait from two years earlier — close-cropped sandy hair, a trim beard, modest clothes — and pasted a new self-portrait over it. The resulting double self-portrait (Monte at 43, hidden beneath a new portrait of Monte at 45) testifies to the persistence of male pattern baldness throughout human history. It also exemplifies Monte's astonishing attention to detail.