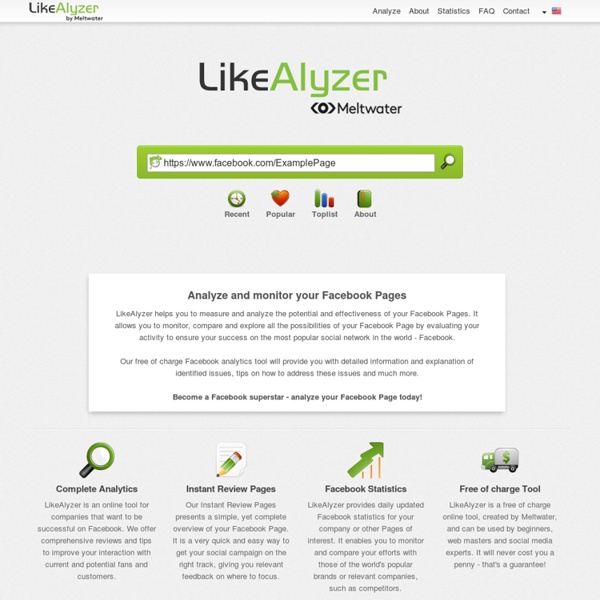 Website Color Schemes: The Palettes of 50 Visually Impactful Websites to Inspire You Did you know that Facebook is blue because Mark Zuckerberg is red-green color blind? “Blue is the richest color for me; I can see all of blue” says Zuckerberg. While this choice of color doesn’t seem very scientific, it still proves that a lot of thought is put into the choice of color. As Buffer writes, over 90% of our assessment of a product is made on color alone, so it makes sense that color should be considered with care for every design decision, particularly on websites.

How Your Facebook Profile Reveals More About Your Personality Than You Know Words most commonly used by women. The researchers could predict users’ genders with 92 percent accuracy. What do your status updates really say about you? In a study published last week at PLOS ONE, scientists at the University of Pennsylvania examined the language used in 75,000 Facebook profiles. They found differences across ages, genders, and certain personality traits.

Choose a License This work is licensed under the Creative Commons LICENSE_NAME License. To view a copy of this license, visit LICENSE_URL. We are currently testing a new version of the License Chooser. Please consider using the Chooser beta, and leave us feedback on how we can improve. Creative Commons is a non-profit organization. We need your support to continue providing these tools.

Save 2 hrs Daily on Facebook marketing Have you ever been writing aFacebook post and thoughtto yourself: “Is this actually going to get any Likes or Shares?” If you answered yes, then you’re not alone.In fact, most of us wonder this samething every time we post! Why? Because predicting which contentwill go viral on Facebook is virtually impossible. At least, it has been…until NOW.

Thrive Content Builder - Live WordPress Front End Editor The Dark Side of the "Visual" Editor for WordPress Market... Front end editors (a.k.a. Visual editors) for WordPress are all the rage, these days. Facebook Building Major Artificial Intelligence System To Understand Who We Are Meaningful artificial intelligence has been the aim of computer science since Alan Turing first imagined, in the 1950s, a computer that “passed” as human. Hollywood movies began shortly thereafter to depict computers with human-like intelligence. But, like so many things, artificial intelligence has been much harder to achieve in reality than in the movies. But following research breakthroughs about five years ago, leading tech companies, including Microsoft, IBM and Google, have begun investing big money in artificial intelligence applications. Facebook, not wanting to be left behind, is flexing its muscles, too.

Socialomate Twitter Auto-responder Welcome all your followers and much more. Setup up to 10 messages. Twitter Campaigns Top 10 Fonts Web Designers Love [Infographic] Ever wonder what fonts other web designers prefer to use in their work? Ever wonder if your choice of font can help you set you apart from the rest? Ever wanted to know the answers to a question so badly that you would carry out a research to find out? How to Dominate the Entire First Page of Google Your online reputation can impact virtually every aspect of your digital marketing program from the conversion rate on your pages to your click-through rate in paid search. Controlling the conversation around your brand is critical to upholding and improving reputation. In the long-term, monitoring social activity and proactively combating sources of negative sentiment while engaging the positive is a core strategy.