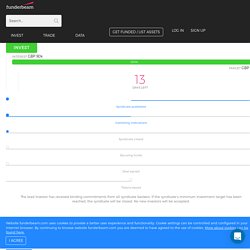 The VTC Group is a catalyst for growth; enabling SMEs to access the supply chains of multinational organisations. Our model revolutionises how pioneering small companies and established large corporates work together to drive innovation across the “Valley of Death” – the chasm every new business idea must conquer if they want to create a business and achieve growth. Our service and corporate advisory platform focuses on wealth creation; it reinvents the technology transfer process by working with Corporates, SMEs, Governments, Universities and Accelerators across four main business functions. 1) Virtual Technology Clusters: We use a virtual ecosystem and networking events to drive business creation between corporate sponsors and SMEs.

We currently have two operational VTC’s with more planned. * The Leidos Cyber Security VTC is sponsored by Leidos, Unilever, Dell EMC and PA Consulting. Why the VTC Group is important How the VTC Group started A study from the John M. Team. Bringing Outside Innovation Inside. Casting a Wide Innovation Net. Temaindkaldelser. Mutually Assured Disruption. Illustration by Kotryna Zukauskaite A version of this article appeared in the Spring 2016 issue of strategy+business. 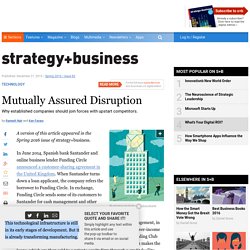 In June 2014, Spanish bank Santander and online business lender Funding Circle announced a customer-sharing agreement in the United Kingdom. When Santander turns down a loan applicant, the company refers the borrower to Funding Circle. Microsoft Starts Up. Illustration by Phil Hackett At the Microsoft Accelerator in Beijing, engineers are developing new technologies that could transform industries as diverse as automobiles, mobile telephony, and e-commerce. 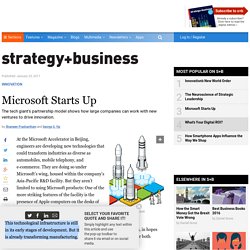 They are doing so under Microsoft’s wing, housed within the company’s Asia-Pacific R&D facility. But they aren’t limited to using Microsoft products: One of the more striking features of the facility is the presence of Apple computers on the desks of some of the roughly dozen startups working there. Sparking creativity in teams: An executive’s guide. Senior managers can apply practical insights from neuroscience to make themselves—and their teams—more creative. 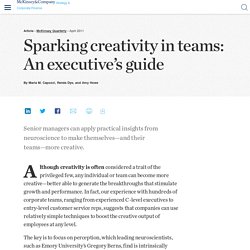 Although creativity is often considered a trait of the privileged few, any individual or team can become more creative—better able to generate the breakthroughs that stimulate growth and performance. In fact, our experience with hundreds of corporate teams, ranging from experienced C-level executives to entry-level customer service reps, suggests that companies can use relatively simple techniques to boost the creative output of employees at any level. The key is to focus on perception, which leading neuroscientists, such as Emory University’s Gregory Berns, find is intrinsically linked to creativity in the human brain. Seven steps to better brainstorming. Most attempts at brainstorming are doomed. 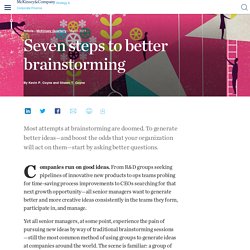 To generate better ideas—and boost the odds that your organization will act on them—start by asking better questions. Companies run on good ideas. From R&D groups seeking pipelines of innovative new products to ops teams probing for time-saving process improvements to CEOs searching for that next growth opportunity—all senior managers want to generate better and more creative ideas consistently in the teams they form, participate in, and manage. Yet all senior managers, at some point, experience the pain of pursuing new ideas by way of traditional brainstorming sessions—still the most common method of using groups to generate ideas at companies around the world. 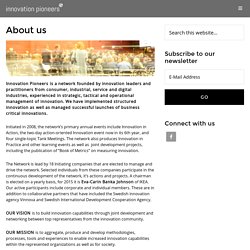 We have implemented structured innovation as well as managed successful launches of business critical innovations. Initiated in 2008, the network’s primary annual events include Innovation in Action, the two-day action-oriented Innovation event now in its 6th year, and four single-topic Tank Meetings. The network also produces Innovation in Practice and other learning events as well as joint development projects, including the publication of “Book of Metrics” on measuring innovation. The Network is lead by 18 Initiating companies that are elected to manage and drive the network. Selected individuals from these companies participate in the continuous development of the network, it’s actions and projects. Initiating companies: You Need an Innovation Strategy. Despite massive investments of management time and money, innovation remains a frustrating pursuit in many companies. 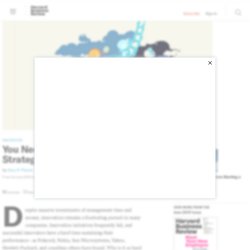 Innovation initiatives frequently fail, and successful innovators have a hard time sustaining their performance—as Polaroid, Nokia, Sun Microsystems, Yahoo, Hewlett-Packard, and countless others have found. Why is it so hard to build and maintain the capacity to innovate? The reasons go much deeper than the commonly cited cause: a failure to execute.

The problem with innovation improvement efforts is rooted in the lack of an innovation strategy. A strategy is nothing more than a commitment to a set of coherent, mutually reinforcing policies or behaviors aimed at achieving a specific competitive goal. Aping someone else’s system is not the answer. Innovation Strategy: 4 Key Tactics of Top Growth Companies. Dave Power Dave Power is president of Power Strategy, where he helps growth companies with strategy, alignment, and execution. 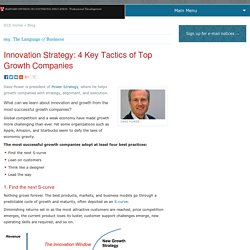 What can we learn about innovation and growth from the most successful growth companies? Global competition and a weak economy have made growth more challenging than ever. Yet some organizations such as Apple, Amazon, and Starbucks seem to defy the laws of economic gravity. The most successful growth companies adopt at least four best practices: Find the next S-curve Lean on customers Think like a designer Lead the way 1.