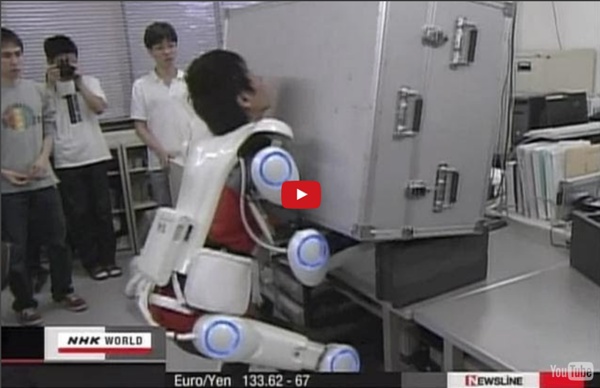 The Omnivorous Mind — John S. Allen In this gustatory tour of human history, John S. Allen demonstrates that the everyday activity of eating offers deep insights into human beings’ biological and cultural heritage. We humans eat a wide array of plants and animals, but unlike other omnivores we eat with our minds as much as our stomachs. Drawing on the work of food historians and chefs, anthropologists and neuroscientists, Allen starts out with the diets of our earliest ancestors, explores cooking’s role in our evolving brain, and moves on to the preoccupations of contemporary foodies. To explain, for example, the worldwide popularity of crispy foods, Allen considers first the food habits of our insect-eating relatives.

mental_floss Blog » Robot Orders Scone, Leaves Big Tip Today's completely true weirdness: a telepresence robot orders a scone from a coffee shop in Mountain View, California. The robot is given the scone, pays for it, and turns out to be a good tipper. Now, part of what's remarkable about the following video is the whole bit about the robot (which is completely controlled by a person -- that person is visible in a screen on the robot's "face" and speaks with coffee shop patrons and employees via a mic/speaker/camera combo). So we're not talking about autonomous scone-ordering robots just yet. This particular video starts a little slowly (as the videographer apparently hears from a friend that a robot is in line, and the videographer dashes to the coffee shop).

The red hot business of divorce celebration 12 November 2014Last updated at 20:27 ET By Barbara Balfour Business reporter Even shooting ranges are benefiting from the growing popularity of celebrating divorce in the US After finalising a painful divorce Wendy Lewis decided there was only one way to celebrate - by blasting her wedding dress with a machine gun. To get the job done the newly divorced American gathered her female friends - and the dress - and flew to Las Vegas, Nevada for a long weekend. Upon arrival in Vegas the trip to a shooting range was arranged by a small firm at the forefront of one of the city's fastest-growing business sectors - divorce party planning. And while what happens in Vegas is supposed to stay in Vegas, the planner in question, Glynda Rhodes, 51, is happy to take up the story. "Ms Lewis had never picked up a gun before, but she brought her wedding dress into the shooting range and hung it up," she says. Ms Lewis's wedding dress after it was shot Some of Ms Rhodes' customers celebrate with a skydive

The future of UI Synopsis It's 10 years since Minority Report hit our screens. The film's science adviser and inventor John Underkoffler demos g-speak – the real-life version of the eye-popping, tai chi-meets-cyberspace computer interface that Tom Cruise used to whoosh through video clips of future crimes. Is this how tomorrow's computers will be controlled? Talk recorded 11 February 2010. About the Speaker Remember the data interface from Minority Report?

Introducing the Knowledge Graph: things, not strings Cross-posted on the Inside Search Blog Search is a lot about discovery—the basic human need to learn and broaden your horizons. But searching still requires a lot of hard work by you, the user. So today I’m really excited to launch the Knowledge Graph, which will help you discover new information quickly and easily. Take a query like [taj mahal]. For more than four decades, search has essentially been about matching keywords to queries. To a search engine the words [taj mahal] have been just that—two words. But we all know that [taj mahal] has a much richer meaning. The Knowledge Graph enables you to search for things, people or places that Google knows about—landmarks, celebrities, cities, sports teams, buildings, geographical features, movies, celestial objects, works of art and more—and instantly get information that’s relevant to your query. Google’s Knowledge Graph isn’t just rooted in public sources such as Freebase, Wikipedia and the CIA World Factbook. 1. 2. 3.

Paro Therapeutic Robot C'est pas mon idée !: Sociét&eacu... 5 Mind-Blowing Projects by College Kids College graduates may still have a tough time finding a decent job in this economy, but some students are trying to make the best use of their time in the classroom. We've rounded up five mind-blowing projects by college kids for your viewing enjoyment. Continue reading to see more. 5. Arcade Game Washing Machine File this under: top 10 student inventions. 4. Called the JediBot, this innovative Kinect-controlled robot, developed by Stanford University students, "can wield a foam sword (light saber, if you will) and duel a human combatant for command of the empire." 3. Students from Dartmouth College and the University of Bologna have developed WalkSafe, an innovative app that's designed to alert smartphone users when a car is near. 2. Believe it or not, particle engineer Paul Luckham and fashion designer Manel Torres from Imperial College London combined cotton fibers, polymers and a solvent to form a liquid that becomes a fabric when sprayed. 1.

untitled Source: Jouni A. Smed Introduction Much of the discussion of out-of-body experiences has centered around the recounting of experiences and speculation on the nature of those experiences. Some articles have questioned whether the experiences are of an hallucinatory nature or purely a function of biochemical processes that occur in the brain, and, at the other extreme, some have linked them with notions of the existence of an immortal soul and other ideas generally associated with religious interpretations of human existence. What is an out-of-the-body experience? Out-of-body-experiences (OBEs) are those curious, and usually brief experiences in which a person's consciousness seems to depart from his or her body, enabling observation of the world from a point of view other than that of the physical body and by means other than those of the physical senses. Not all OBEs occur spontaneously. The idea that we all have a double seems to spring naturally out of that of the OBE. What is animism?

AIST's HRP4: Sci-Fi-Like Household Helper Robots Have Arrived You've seen plenty of robots and androids in the news, but you've probably never seen anything as astonishing as HRP4, which promises to be cheap, powerful, and the most sci-fi-like bot built to date. AIST and Kawada Industries just revealed the new humanoid machine, and by making it look "athletic" they've also turned HRP4 into a real-world version of the fictional life-assisting robots you've seen in countless sci-fi movies (the older generation of 'droids in Will Smith's I, Robot movie for one). He's five feet tall and weighs just 86 pounds, including battery. Bipedal android robotics seems to have evolved swiftly enough that new machines don't need props like Asimo's chunky battery backpack. Nevertheless, HRP4 has 34 degrees of freedom in movement, including full arm articulation and simple hand moves, which give it a grasping force of 1.1 pounds. Check out HRP4 in the video below--it's eight minutes, but worth it. Did you spot the potential here?