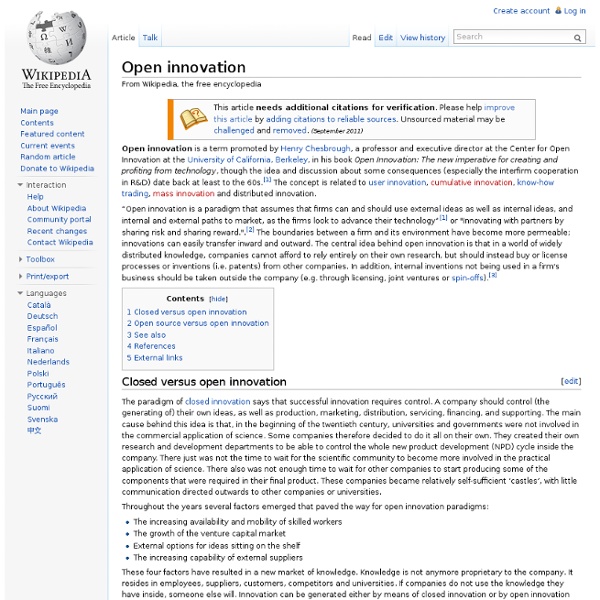 Open innovation is a term promoted by Henry Chesbrough, adjunct professor and faculty director of the Center for Open Innovation at the Haas School of Business at the University of California,[1] in a book of the same name,[2] though the idea and discussion about some consequences (especially the interfirm cooperation in R&D) date as far back as the 1960s[citation needed]. Some instances of open innovation are Open collaboration,[3] a pattern of collaboration, innovation, and production. The concept is also related to user innovation, cumulative innovation, know-how trading, mass innovation and distributed innovation. “Open innovation is a paradigm that assumes that firms can and should use external ideas as well as internal ideas, and internal and external paths to market, as the firms look to advance their technology”.[2] Alternatively, it is "innovating with partners by sharing risk and sharing reward Advantages[edit] Disadvantages[edit] Models of open innovation[edit] See also[edit]

How to Make Your Brain More Creative Can you make yourself more creative? According to Shelley Carson, author of the new book Your Creative Brain: Seven Steps to Maximize Imagination, Productivity, and Innovation in Your Life, you can. In a recent conversation with the Boston Globe, Carson, who has a PhD in psychology from Harvard University and teaches at Harvard Extension School, noted these three things: “In the business world, creativity is now the number-one quality that head hunters are looking for in top-level chief executives. It’s possible, she says, for creativity-challenged people to use “biofeedback programs and other types of cognitive behavioral research” to change brain activation patterns to “mimic the brain activation of highly creative people.” “What we have found in recent years in the neuroscience of creativity is that highly creative people tend to activate certain neural patterns in their brain when they are solving a creative problem or doing creative work,” she told the Globe.

The Weird Rules of Creativity The Idea in Brief Hire people you don’t like, then promote them when they defy you. Wholeheartedly commit to risky projects. Get your happiest workers arguing. Recipes for disaster? Traditional management practices apply when you need to make money now from tried-and-true products and services—but they don’t foster creativity. To innovate, companies must ignore longstanding management wisdom and adopt downright weird ways. The Idea in Practice To encourage creativity, take these counterintuitive approaches to hiring, managing, and risk-taking: Hiring Recruit people who aren’t blinded by preconceptions, including: mavericks and misfits who drive bosses and coworkers crazy because they reject popular opinion and bull-headedly champion their own ideas. When new hires at a toy company pointed out current products’ flaws, their behavior made senior executives “hate them.” people with seemingly irrelevant skills Example: Managing Encourage people to defy superiors and peers. Risk-Taking Example:

Managing for Creativity The Idea in Brief Your company’s most important asset? Creative capital: the arsenal of creative thinkers whose ideas turn into valuable products and services. Creative employees pioneer new technologies, birth new industries, and power economic growth. But the process by which they do all this is complex and chaotic. How to manage your firm’s creative capital so it delivers maximum value—increasing efficiency, improving quality, and raising productivity? Help employees do their best work by engaging them intellectually and eliminating distractions. The payoff? The Idea in Practice SAS’s strategies for maximizing creativity: Help Employees Do Their Best Work Creative people excel when you present them with on-the-job challenges. Example: SAS’s developers thrive on intellectual stimulation. But as much as creative people like to feel challenged, they don’t want to have to surmount unnecessary obstacles, so SAS also strives to eliminate hassles off and on the job. Make Managers “Creatives”

The Three Threats to Creativity - Teresa Amabile - HBS Faculty by Teresa Amabile | 2:49 PM November 15, 2010 Creativity is under threat. It happens whenever and wherever there’s a squeeze on the ingredients of creativity, and it’s happening in many businesses today. According to the Labor Department’s most recent stats, productivity is up. But stretching fewer employees to cover ever more work in our job-starved recovery is no way to run the future. A recent story about the 40th anniversary of Xerox PARC stirred my memories of how the creativity ingredients overflowed at that place, in that time. What made PARC so different from organizations where creativity falters? 1. 2. PARC was ahead of its time, but it was no anomaly. Forty years after the birth of PARC, have workplaces gotten any better at fostering that sort of brilliance? Teresa Amabile is Edsel Bryant Ford Professor of Business Administration at Harvard Business School.

Early Prototypes Can Hurt a Team's Creativity In product development, a popular tool is the quick-and-dirty prototype. Because simple prototypes make the abstract concrete, they can guide innovators’ conversations and focus their attention, helping them to move forward. But many companies rapidly follow them with polished prototypes—and the trouble begins. Research I’ve conducted in the auto industry shows that when people see a detailed prototype, something odd happens: They concentrate on the prototype’s form and function, forgetting to attend to any remaining ambiguities about the problem the product is meant to solve or the obstacles in the way. Instead of clarifying the path ahead, the prototype puts a halt to useful brainstorming. This occurs because when a complex technological product is under development, the groups involved often try to proceed in unison without realizing that they don’t agree about what prompted the project in the first place or what is blocking its completion. How can organizations avoid this pitfall?

Creativity with a small c - Alessandro Di Fiore by Alessandro Di Fiore | 4:44 AM March 19, 2012 Schumpeter’s vision of the lone entrepreneur is so entrenched in our minds that we unconsciously tend to believe that entrepreneurial flair is a matter of genetics; a recent ECSI survey I conducted found that 68% of business leaders firmly believe that great innovators are born and cannot be made. But scientific evidence of the last 30 years has proven just the opposite. Many of the traits we assume to be genetically determined are in fact the product of one’s environment. A famous study on identical twins aged between 15 and 22 found that while 80% of IQ differences were attributable to genetics, only around 30% of the performance on creativity tests could be explained that way. That’s a tremendously significant finding. Of course, not every child is going to be a Leonardo da Vinci, nor is every young manager a Steve Jobs. Arguably, little c creativity is a bigger deal in business than the big C.

Want a Team to be Creative? Make it Diverse - Beth Comstock by Beth Comstock | 11:05 AM May 11, 2012 Diversity is the crucial element for group creativity. Innovation teams tasked with creating new products or technologies or iterating existing ones need tension to produce breakthroughs, and tension comes from diverse points of view. This is the opposite of groupthink, the creativity-killing phenomenon of too much agreement and too similar perspectives that often paralyzes otherwise great teams. Assembling and managing diverse teams is hard work. How to get started? And sometimes the necessary diverse view is one that isn’t way outside the norm: it can be right there in front of you. Finally, integrating divergent views to boost creativity is a natural job for marketers. Merck's Risky Bet on Research In early January, not two weeks into his job as chief executive officer of Merck (MRK), Kenneth C. Frazier got word that a safety panel had shut down a nearly completed 13,000-patient study of an experimental drug. It was vorapaxar, a blood thinner touted as the prize jewel in Merck's pipeline. Some analysts had predicted sales could reach $5 billion a year. Despite the setback, the litigator, 56, with just three years of operational experience at Merck, announced on Feb. 3 that the company was doubling down on new-drug development and plans to spend as much as $8.5 billion on research in 2011. Stumbles like vorapaxar are, in Frazier's view, the price of doing business in the drug industry. Raising the research ante is Frazier's response to an existential crisis facing Big Pharma. When Frazier announced the $8.5 billion research bet, Merck shares fell 2.7 percent. Frazier didn't follow the typical path to the top of a drug company.