How Apple Became China's Most Coveted Luxury Brand. When a Chinese publishing group recently released its consumer survey of the luxury market in China, the top ranking wasn't held by a brand like Chanel, Louis Vuitton or Hermes. 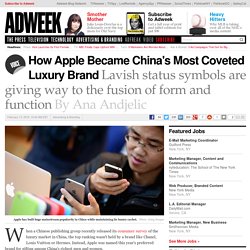 Instead, Apple was named this year's preferred brand for gifting among China's richest men and women. The designation is not just a testament to Apple's awe-inspiring growth, which was illustrated quite profoundly by this week's not-so-outlandish investor claims that the company is worth close to $1.3 trillion. It's also a sign of the shift from luxury as status symbol to luxury as cultural code . Where status symbols show off economic success, codes are reflections of one's cultural capital.

BMW Revamps China Marketing to Focus Less on Status. BMW AG will increase spending on online marketing in China and emphasize its technology as part of efforts to target younger buyers, who care more about the latest features than the emblem as a status symbol. 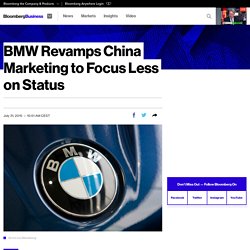 The world’s largest premium-car brand will highlight technology features, some developed especially for the Chinese market, such as steering settings that help with parking and seats that help tone muscles. The company will also offer free Internet connection in its cars for 10 years. That represents a move away from promoting the brand in China as a mark of success, after a two-year study of more than 3,000 consumers showed younger buyers preferred value such as innovation and sustainability. BMW, like other premium automakers, had in the past played up extra legroom and plush backseats in marketing their executive sedans, stretching them for the China market because businessmen and bureaucrats liked being chauffeured. BMW to focus on youth and high-tech innovation in China. BMW says that it will be shifting its marketing plan in China to focus on the youth segment and in-car innovations, instead of stretched wheelbases and luxurious rear passenger accommodation that is the norm over the past few years. 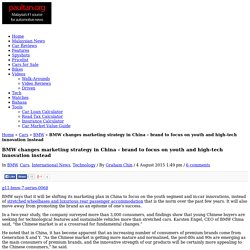 It will also move away from promoting the brand as an epitome of one’s success. In a two-year study, the company surveyed more than 3,000 consumers, and findings show that young Chinese buyers are seeking for technological features and sustainable vehicles more than stretched cars. Alibaba launches Alitrip into hotel IT solutions space. Alibaba Group has made the first big announcement regarding its standalone travel business alitrip.com, and it’s all about the “hotel of the future.” 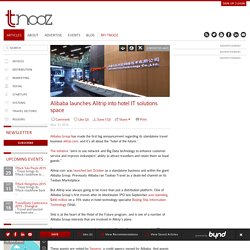 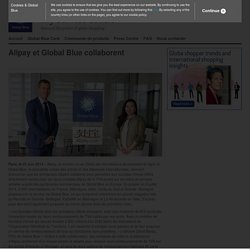 Acheter 2. 3. 2012. Alipay launches ePass to give Western retailers easy access to China's growing e-commerce consumer base. The UpTake: Alipay, the payment platform that powers Alibaba, is offering growth-hungry Western retailers something they may find hard to refuse: access to the growing number of middle class and affluent Chinese e-commerce shoppers in cities like Shanghai and Beijing. 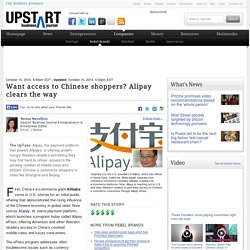 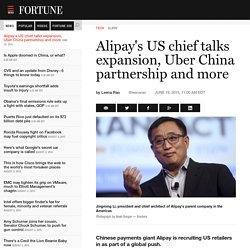 All rights reserved. Fortune.com is a part of the Time.com network of sites. Powered by WordPress.com VIP Email address or Password is incorrect Forgot Password? Want the Full Story? How China leapfrogged the West on internet innovation. I have just spent two years in China, working in an environment where the online world seemed to change every month. 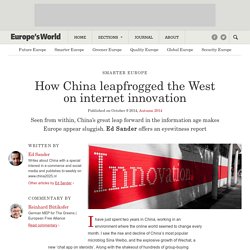 I saw the rise and decline of China’s most popular microblog Sina Weibo, and the explosive growth of Wechat, a new ‘chat app on steroids’. Along with the shakeout of hundreds of group-buying websites, I saw a country leapfrog technology because Chinese consumers skipped desktop and laptop computers and went straight for online access through high quality smartphones.

Alibaba Rethinks Its US E-Commerce Strategy, Folds 11 Main, Other U.S. Holdings Into OpenSky. What's behind the global success of Alibaba's AliExpress. E-commerce giant Alibaba aims to win outside China - CNET. HANOI, Vietnam -- The lights in the conference room flickered a couple of times and then turned off completely. 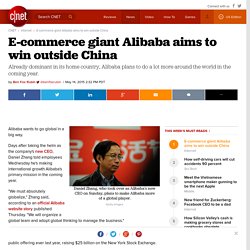 The hum of the air conditioner quieted and the room became still -- unnaturally so for a technology company trying to enter the noisy smartphone business. I was at the Hanoi headquarters of BKAV, a Vietnamese company that's made its money selling security software but now wants a piece of the $2.2 billion smartphone market here. The electricity in the building -- located around the corner from the city's tallest skyscraper, the Keangnam Hanoi Landmark Tower -- sputtered in the middle of a presentation about the company's first phone. Alibaba and its Open (Sesame!) ecosystem. I had the privilege to listen to Charles Li, CEO of the Hong Kong Stock Exchange (HKSE) at a recent conference in Singapore. 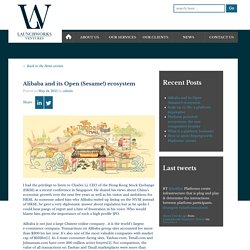 He shared his views about China’s economic growth over the next few years as well as his vision and ambitions for HKSE. As someone asked him why Alibaba ended up listing on the NYSE instead of HKSE, he gave a very diplomatic answer about regulation but as he spoke I could hear pangs of regret and a hint of frustration in his voice. Who would blame him given the importance of such a high profile IPO. Alibaba is not just a large Chinese online company…it is the world’s largest e-commerce company. China leads in digital innovation. HONG KONG: Marketers around the world have much to learn from what is happening in China, according to a leading industry figure, who regards it as leading the field in terms of digital innovation and O2O.

Speaking to Campaign Asia-Pacific, Michael McLaren, global CEO of MRM/McCann, enthused about digital developments in that country. "The China digital landscape in unbelievable," he said. The innovation he saw taking place there was "truly world class". One reason for this may be that Chinese marketers are less set in their ways of thinking than their counterparts in more developed markets, as consumerism has really only taken off there in the past six or seven years. Consumers are similarly open to new ways of doing things. Europe's Falling Behind as China Soars in Digital Innovation. Poor Europe can’t catch a break. The region’s not only trying to keep its currency together, but also struggling to keep up with the fast-moving digital economy. The Digital Evolution Index, created by the Fletcher School at Tufts University, paints a grim picture of the state of technological innovation in the self-anointed old continent.