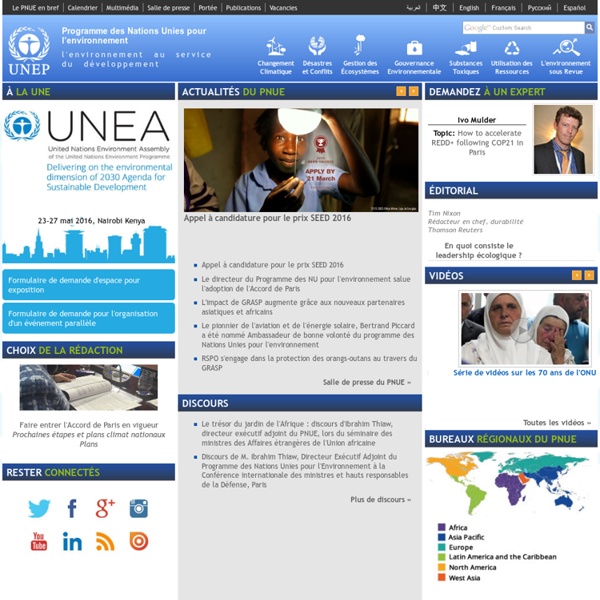 A World without Landfills? It’s Closer than You Think by Jen Soriano Two recipients of this year’s Goldman Environmental Prize are working to abolish the practice of sending trash to landfills and incinerators. And the idea is catching on. posted Apr 17, 2013 How Reducing Food Waste Could Ease Climate Change More than a third of all of the food that's produced on our planet never reaches a table. It's either spoiled in transit or thrown out by consumers in wealthier countries, who typically buy too much and toss the excess. This works out to roughly 1.3 billion tons of food, worth nearly $1 trillion at retail prices. Aside from the social, economic, and moral implications of that waste—in a world where an estimated 805 million people go to bed hungry each night—the environmental cost of producing all that food, for nothing, is staggering. (Read more about causes and potential solutions to the problem of food waste.) The water wastage alone would be the equivalent of the entire annual flow of the Volga—Europe's largest river—according to a UN report.

5 Lessons From The Companies Making Sustainability More Profitable Than Ever Good news for corporate social responsibility leaders: there’s a growing body of evidence that sustainability often goes hand in hand with profits. A new report from MIT Sloan Management Review and the Boston Consulting Group adds even more data to the pile: according to a survey of 2,600 executives and managers around the world, the number of companies that profited from sustainability initiatives climbed to 37%--up 23% from last year. MIT’s paper, The Innovation Bottom Line, is the latest in a series of reports dating back to 2010 that examine sustainability challenges in organizations. Here’s what we learned: Organizations need a business case for sustainability if they want their efforts to be successful.

Climate Change Threatens to Strip the Identity of Glacier National Park GLACIER NATIONAL PARK, Mont. — What will they call this place once the glaciers are gone? A century ago, this sweep of mountains on the Canadian border boasted some 150 ice sheets, many of them scores of feet thick, plastered across summits and tucked into rocky fissures high above parabolic valleys. Today, perhaps 25 survive. In 30 years, there may be none. A warming climate is melting Glacier’s glaciers, an icy retreat that promises to change not just tourists’ vistas, but also the mountains and everything around them. The Best Technology for Fighting Climate Change? Trees When people talk about technologies that might offset climate change, they often evoke not-yet-invented marvels, like planes spraying chemicals into the atmosphere or enormous skyscrapers gulping carbon dioxide from the clouds. But in a new report, Oxford University researchers say that our best hopes might not be so complex. In fact, they are two things we already know how to do: plant trees and improve the soil. Both techniques, said the report, are “no regrets.” They’ll help the atmosphere no matter what, they’re comparatively low-cost, and they carry little additional risk. Specifically, the two techniques it recommends are afforestation—planting trees where there were none before—and biochar—improving the soil by burying a layer of dense charcoal.

What You Need to Know What is COP 17 and the UNFCCC? The United Nations Framework Convention on Climate Change (UNFCCC) is an international environmental treaty produced at the Earth Summit held in Rio de Janeiro in 1992. The UNFCCC’s purpose is to stabilise greenhouse gases (GHGs) in the atmosphere at levels that prevent dangerous interferences with the climate system. These levels should be attained within a term sufficient to allow ecosystems to naturally adapt to climate change, ensuring that food production is not affected and permitting sustainable economic growth. Since 1995, a Conference of the Parties (COP) to the UNFCCC is held where representatives of all the countries that are signatories to the convention evaluate progress towards the UNFCCC’s objectives.