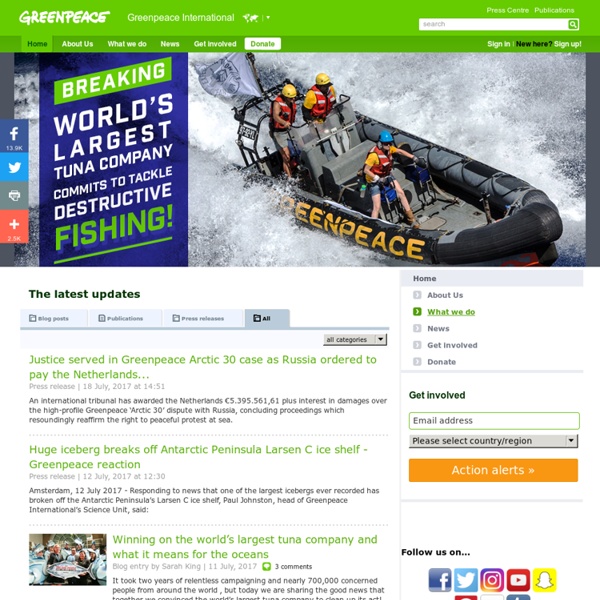 Tiger Day is about more than just saving tigers Blog entry by Shuk-Wah Chung | 29 July, 2015 2 comments Today is International Tiger Day! The lion may be the king of the jungle, but it's the tiger that holds mystique and charisma. From the Chinese zodiac, to Buddhism, and even Rocky Balboa (cue trumpets), the largest of the cat...

Why are we a nation of tree-huggers? 3 February 2011Last updated at 15:44 By Jon Kelly BBC News Magazine Plans to transfer ownership of many public forests in England have provoked a huge row. But why are we so protective of our woodlands? It's about the rustling of the leaves and the crunch of twigs underfoot. It's the sensation of the rough bark on your hands and the light dappling into a clearing. Above all, it's a place where nature takes priority over humans. 50 Lessons I wish I had learned earlier Welcome to our blog! Here you'll find bits and pieces of wisdom learned from cycling 17,000 miles from Alaska to Argentina together as a family. Hope it inspires you to live your dream!

10 Urban Spaces Around the World Reborn as Vibrant Green Parks In some cities, parks are replacing asphalt, and city dwellers are suddenly discovering new green space just steps away. To make cities more livable for an often growing population, government officials, activists and citizens are reclaiming unused or abandoned structures and lots and turning them into new, vibrant green spots that fill the surrounding areas with life. These 10 examples --- spanning four continents -- are perhaps just the beginning of the concrete-to-green revolution. A water reservoir until shut down in 1899, the Paddington Reservoir went on to become a garage, workshop and a commercial garage once more. After sections of the roof collapsed in 1991, the garage was shut down for the last time. Then architecture firm Tonkin Zulaikha Greer was commissioned for the restoration: They were supposed to cap-off the underground site and build a new arrangement on top.

Newly Discovered Wasp Species Enslaves Spiders Spiders spend a lot of time crafting their webs in hopes of making a meal out of all manner of winged insect--but a recently discovered species of wasp is found to use the spider's engineering prowess to its own advantage. Through a not yet understood chemical process, the wasps are able to, quite literally, enslave the unsuspecting spiders to build a nest for their larva, and after all that hard work, become their first meal. Sure, it seems pretty dastardly, but researchers say it's evolution.According to a study published by a Brazilian team in the Journal of Natural History, and reported by Correio Braziliense, the newly discovered wasp species, a member of the Hymenoptera family, is able to control some spiders through a chemical process that remains a mystery. How the Wasp Enslaves the SpiderA female wasp will target a spider and immobilize it with an unknown venom injected into its mouth--at which point the wasp lays its eggs on the spider's abdomen. An Evolutionary Advantage?

Make an Electromagnet A large iron nail (about 3 inches) About 3 feet of THIN COATED copper wire A fresh D size battery Some paper clips or other small magnetic objects 1. Leave about 8 inches of wire loose at one end and wrap most of the rest of the wire around the nail. Try not to overlap the wires. 2. Cut the wire (if needed) so that there is about another 8 inches loose at the other end too. 3. Now remove about an inch of the plastic coating from both ends of the wire and attach the one wire to one end of a battery and the other wire to the other end of the battery. Wildlife Webcams - Live from the Rainforest Enjoying this page? If everyone watching World Land Trust's webcams made a donation of £1, it would cover the cost of keeping the cameras running and enable us to add more to the network! For example, text WEBC13 £3 ($5) to 70070 to donate £3 ($5) to World Land Trust's webcam fund. Donate with

20 Most Inspirational Quotes by Steve Jobs Oct 6, 2011 The world lost a visionary yesterday. The outpouring of support and admiration has been remarkable. In the words of Seth Godin, ‘there’s too much to say, too many capable of saying it better than I ever could.’ So instead, the Sifter will remember these words of wisdom from Steve Jobs himself. "Fish Chopper" Animation Shows the Gruesome, Deadly Side of Power Plant Cooling Towers (Video) Image via YouTube video The Sierra Club is pointing attention to the once-through cooling systems used by many power plants. Power plants suck up over 200 billion gallons of water a day, and with that water comes millions of fish that don't exactly make it out alive. The conservation group has put together an animation showing how the systems work, and why they need to be upgraded. As the Sierra Club points out, there are already closed-cycle cooling systems that can replace the once-through systems and not only conserve a huge amount of water, but also save countless fish and other aquatic species, not to mention the animals that depend on the fish as a food source. The Sierra Club notes, "The EPA recently proposed long-overdue guidelines for cooling water use at power plants.