40 Must-See Photos From The Past 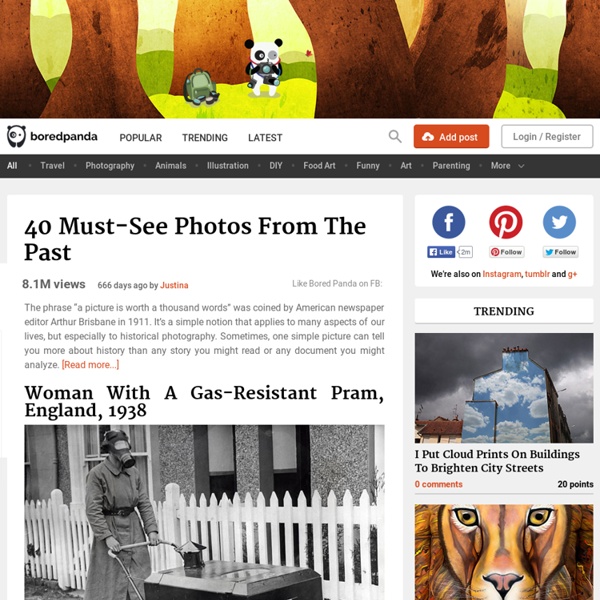 The phrase “a picture is worth a thousand words” was coined by American newspaper editor Arthur Brisbane in 1911. It’s a simple notion that applies to many aspects of our lives, but especially to historical photography. Sometimes, one simple picture can tell you more about history than any story you might read or any document you might analyze. [Read more...] These photographs all tell stories about the historical figures or events that they represent. Once taken simply to document their present, they now help us witness the past. Perhaps the wars, poverty, fights for freedom and little miracles of the past have lessons for us that we can use today? (via sobadsogood) Woman With A Gas-Resistant Pram, England, 1938 Unpacking the head of the Statue of Liberty, 1885 Elvis in the Army, 1958 Animals being used as part of medical therapy, 1956 Testing of new bulletproof vests, 1923 Charlie Chaplin at age 27, 1916 Hindenburg Disaster, May 6, 1937 Circus hippo pulling a cart, 1924

This Is What That Looked Like in the 1950s This is what alot of oranges looked like at the Miami Orange Bowl Game, 1951. This is what a canoe on a 1957 Ford Fairlane 500 looked like in 1957. This is what 5 best friends from grammar school in the 1920s looked like in 1950. This is what a string of keepers looked like. 10 Team-Building Games That Promote Collaborative Critical Thinking One of education’s primary goals is to groom the next generation of little humans to succeed in the “real world.” Yes, there are mounds of curricula they must master in a wide breadth of subjects, but education does not begin and end with a textbook or test. Other skills must be honed, too, not the least of which is how to get along with their peers and work well with others. This is not something that can be cultivated through rote memorization or with strategically placed posters.

40 Of The Most Powerful Photographs Ever Taken Sisters pose for the same photo three separate times, years apart. A Russian war veteran kneels beside the tank he spent the war in, now a monument. A Romanian child hands a heart-shaped balloon to riot police during protests against austerity measures in Bucharest. Retired Philadelphia Police Captain Ray Lewis is arrested for participating in the Occupy Wall Street protests in 2011. A monk prays for an elderly man who had died suddenly while waiting for a train in Shanxi Taiyuan, China. A dog named "Leao" sits for a second consecutive day at the grave of her owner, who died in the disastrous landslides near Rio de Janiero on January 15, 2011.

30 Of The Most Powerful Images Ever A picture is worth a thousand words, but not all pictures are created equal. The pictures we usually feature on Bored Panda can be cute, beautiful, funny, or enchanting, but these pictures are powerful. They are gripping and unforgettable because of the volumes they speak about the human condition – about some of the best and worst moments of contemporary human existence. The 51 Most Perfectly Timed Photos Ever. My Jaw Literally Dropped To The Floor! Right place, right angle, right time. These are the unbelievable moments every photographer dreams of capturing. 60 Fabulous Color Vintage Photographs That Capture Street Scenes of the United States in the 1940s After recovering from the crises of the Great Depression and the Dust Bowl, the spirit of human ingenuity and American entrepreneurship found a way to persevere in the 1940s. As the country prepared for war in the early '40s, collaboration between businesses and the American people represented a collective resourcefulness. These fabulous photos, were taken by 35mm Kodachrome film from Dave Gelinas's collection, offer a candid look at an America in transition and the changing cities that people called home.

Alternatives To Homework: A Chart For Teachers Alternatives To Homework: A Chart For Teachers Part of rethinking learning means rethinking the bits and pieces of the learning process–teaching strategies, writing pieces, etc. Which is what makes the following chart from Kathleen Cushman’s Fires in the Mind compelling. Rather than simply a list of alternatives to homework, it instead contextualizes the need for work at home (or, “homework”). It does this by taking typical classroom situations–the introduction of new material, demonstrating a procedure, etc.), and offering alternatives to traditional homework assignments. In fact, most of them are alternatives to homework altogether, including group brainstorming, modeling/think-alouds, or even the iconic pop-quiz.

20 Historic Black and White Photos Colorized One of the greatest facets of reddit are the thriving subreddits, niche communities of people who share a passion for a specific topic. One of the Sifter’s personal favourites is r/ColorizedHistory. The major contributors are a mix of professional and amateur colorizers that bring historic photos to life through color. 51 Must-Seen Historic Photos 1967 - Sweden changes from driving on the left to driving on the right. The change was made due to the fact that it’s two closest neighbors, Finland and Norway, drove on the right, which caused great confusion at border crossings. Vehicles in Sweden were also LHD's (Left Hand Driving) and Sweden saw a sharp decline in car accidents after the switch as drivers could see the road ahead of them much more clearly. 1922 - Policeman Bill Norton measures bathing suits to ensure they are no more than 6 inches above knee at the Tidal Basin in Washington DC. Women who broke this rule were fined, kicked off the beach, or even arrested, depending on the severity of the infraction. 1963 - Alcatraz Island known as the "The Rock" is located 1.5 miles off shore in San Francisco Bay and was a federal prison from 1933 until 1963.

Places That Are Actually Real But Don't Look So These places look so unreal, but they are real! Maybe some of you were on one of these beautiful place, and if one of you did, you are than really happy person who live on this planet! Just look how this photos are cool and so sweet.