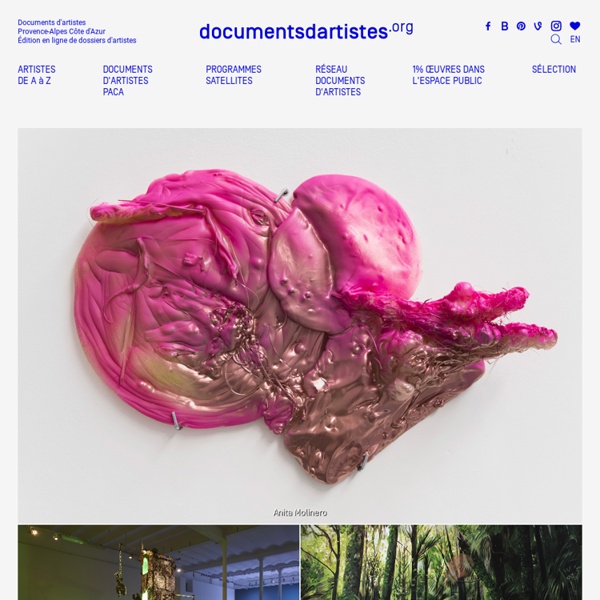 The Center for Book Arts ~ the art of the book Exhibitions at The Center for Book Arts Since its inception in 1974, The Center for Book Arts Gallery has mounted contemporary and historical exhibitions presented in the context of the working artists' studio. Over 140 exhibits have showcased the work of more than 2,500 established and emerging artists. Many catalogs of these exhibits are still available. ROBERT ATKINS.NET Antonio Muntadas and the Media Landscape A catalogue essay and interview Meditating on Art and Life in the Information Age Catalogue essay for Des/Aparicions, Centre d'Art Santa Monica, Barcelona, 1996 Talking about plans for his current Des/Aparitions exhibition, Antoni Muntadas observed that "creating a useful structure is the creative aspect of the work."

Talisman - Plume Talisman Quetzal: you write the word on a sheet of paper then erase it; each word, a talisman, leaves a track: a magpie struts across a portal and vanishes from sight; when you bite into sea urchin, ocean currents burst Measuring the Universe : Roman Ondák Viewers play a vital role in the creation of Measuring the Universe (2007), by Slovakian artist Roman Ondák (b. 1966). Over the course of the exhibition, attendants mark Museum visitors' heights, first names, and date of the measurement on the gallery walls. Beginning as an empty white space, over time the gallery gradually accumulates the traces of thousands of people. The inclusion of viewers in the process of art making has a long tradition in the history of performance-based art.

New Website Aims to Connect Unrepresented Artists with Gallerists and Curators Last winter, Adam Yokell was looking to expand the scope of his fledgling Brooklyn gallery. But he was hard-pressed to find emerging, unrepresented artists outside of New York—and he was intent on developing a diverse and expansive program. Then an idea hit him.