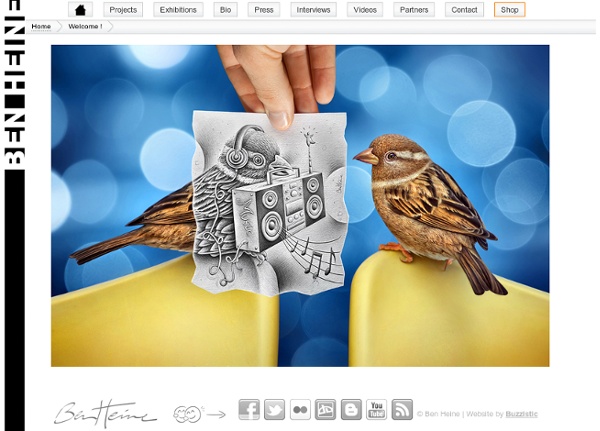 Photoshop Tips Many people can use Photoshop, but only a select few can call themselves gurus. Learn all the methods in the 20 tutorials below and you’ll be well on your way to joining this elite. Rather than focus on tuts for beginners, intermediates or advanced users, we’ve simply chosen ones which produce jaw-dropping effects. All of them are easy to follow, although most do require at least some prior knowledge and experience.

Shadow Dancing Diet Wiegman creates a bit of different sculptures by arranging piles of rubbish which, when lit in a special way, result in producing a perfect shadow of Michael Jackson, Michelangelo’s David or other persons and objects on the wall. He is working with this unique art form since he finished his studies in 1965. Wiegman received international recognition for his installations which has been copied by others throughout the years. With his art he creates a world of illusion and reality that invites the viewer to look at so-called ordinary objects and situations in a different way. Artist's Physical Gestures Produce Beautiful Charcoal Drawings Using just her body and a piece of charcoal, New Orleans-based performance artist Heather Hansen bends and twists in fluid motions across the surface of paper to create beautifully rough symmetrical shapes and patterns. Her captivating performances involve dance-like movements that are just as much the main focus as the final, large-scale drawings. Watching her process is a mesmerizing experience where lines emerge from her many natural, physical gestures. Without hesitation, she repeats her movements and smears the lines together into the final, unpredictable works. She then lifts her body off of the page to reveal the one-of-a-kind pieces.

Everyday Objects Remember artist Terry Border of Bent Objects fame, who explores the secret life of everyday objects in playful vignettes using simple bent wire? Border is back with Bent Object of My Affection: The Twists and Turns of Love -- a charming collection of new 60 bent-wire vignettes in which household objects explore the romantic and the risqué. Sweet and kooky, Border's images are also a light-hearted metaphor for love itself, wherein the ordinary becomes extraordinary. And though Border's overly punny captions fall flat for me, the images themselves exude enough delight to make it all a treat. Love is Free -- You make my world go round

Robot silkworms to print architectural structure Researchers at MIT plan to 3D print a pavilion by imitating the way a silkworm builds its cocoon. The research team, headed by architect and Mediated Matter Group founder Neri Oxman, attached tiny magnets to the heads of silkworms to discover how they “print” their pupal casings around themselves. “We've managed to motion-track the silkworm’s movement as it is building its cocoon,” said Oxman. “Our aim was to translate the motion-capture data into a 3D printer connected to a robotic arm in order to study the biological structure in larger scales.” The pavilion is part of a research project to explore ways of overcoming the existing limitations of additive manufacturing at architectural scales and follows recent proposals for a house made of 3D printed concrete sections and a dwelling made of prefabricated plastic elements. Top image: colour scanning electron microscope image of the exterior surface of a silk moth cocoon.

Big Doodle Big sharpie doodle! Big Doodle - sharpie on mat board - 40" x 32" Artwork © Lawrence Yang 2009 my blog | my site | purchase inquiries currency collages by mark wagner dec 16, 2013 currency collages by mark wagner currency collages by mark wagnerimage courtesy of mark wagner 12 Inspirational and Exclusive Interviews on Yanko Design – Hideshi Hamaguchi 12 Inspirational and Exclusive Interviews on Yanko Design – Hideshi Hamaguchi So far we have had four awesome designers share their wealth of experiences in this Inspirational and Exclusive Interviews series. Robert Brunner spoke about the core DNA of a designer/entrepreneur; Scott Wilson showed us how to rise from the ashes like a phoenix; Karim Rashid taught us his roadmap to success and Yves Béhar spoke about forging partnerships. My recent visit to the red dot award ceremony for product design at Essen, brought me face to face with the charismatic Hideshi Hamaguchi, the inventor of the USB Stick. Yes, the very same stick you use to store data, transfer files etc.