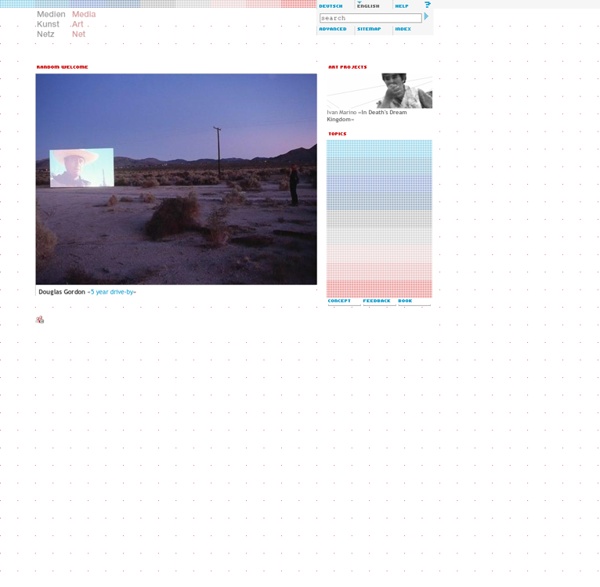 Matters in Media Art · SFMOMA Enter Pam and Dick Kramlich, well-known collectors of media art who have a long history with SFMOMA. Given their special concerns with precisely these questions, they sponsored the Matters in Media Art initiative in 2003. An international research collaboration between the New Art Trust, the Museum of Modern Art in New York, SFMOMA, and Tate in London, Matters in Media Art is devoted to developing guidelines for the care and preservation of time-based media works. “Our first meeting was a two-day intensive at Tate,” says Sterrett. “Over those two days and several months that followed, we fleshed out a set of procedures and downloadable forms that any art institution can use to loan a video, film, audio piece, or computer-based installation.”

Rhizome - base de données The ArtBase is Rhizome's archive of digital art, freely accessible to the public online. The Rhizome ArtBase was founded in 1999 to preserve works of net art that were deemed to be "of potential historical significance." Encompassing a vast range of projects from artists all over the world, the ArtBase provides a home for works that employ materials such as software, code, websites, moving images, games, and browsers. Cyberfeminism l Monoskop VNS Matrix, A Cyberfeminist Manifesto for the 21st Century, 1991. Old Boys Network, 100 Anti-Theses of Cyberfeminism, 1997, HTML. A resource on the art and cultural movement. Associated with technofeminism and xenofeminism. Protagonists[edit] Events[edit]

Cardboard Overview   Developers are pioneering new virtual experiences with Cardboard. Join us. The Cardboard SDKs for Android and Unity simplify common VR development tasks so you can focus on building your new immersive experience. Cardboard SDK for Android Build apps that display 3D scenes with binocular rendering, track and react to head movements, and interact with apps through magnet input. [US] Perceiving Perception / MIT For the first time this semester, MIT offered a Vision in Art and Neuroscience course designed and taught by computational neuroscientist Sarah Schwettmann, light artist and MIT Museum Studio Manager Seth Riskin, and Professor Pawan Sinha from MIT’s Department of Brain and Cognitive Sciences. The course explored the intersection between art and neuroscience in a novel manner: by treating perception as an act of creation, the creation of an individual’s world of experience, and finding shared ground between art and neuroscience in the creative faculty of vision. From limited and noisy sensory data with infinite potential interpretations, the brain builds a rich world of experience and expectation. Creating visual art throws that world of experience back to the outside, and in it we find reflected some mechanisms of the constructive process of vision, giving clues to its underlying framework. course website Perceiving Perception opening in the MIT Museum and Compton Gallery:

Still Water Mu D A l Museum of Digital Art, Zurich enactivecinema publicity (selection) Enactive Cinema Obsession installations • Obsession – Enactive Cinema Installation in the South Carelia Art Museum, Lappeenranta, Finland (April 15 – May 31, 2009) [US] "At the Edge of Art" - un livre, un site Web par Joline Blais et Jon Ippolito Neuroscape lab The glass brain is a Unity3D brain visualization that displays source activity and connectivity, inferred in real-time from high-density EEG using methods implemented in SIFT and BCILAB. This is an anatomically-realistic 3D brain visualization depicting real-time source-localized activity (power and “effective” connectivity) from EEG (electroencephalographic) signals. Each color represents source power and connectivity in a different frequency band (theta, alpha, beta, gamma) and the golden lines are white matter anatomical fiber tracts. Estimated information transfer between brain regions is visualized as pulses of light flowing along the fiber tracts connecting the regions. The final visualization is done in Unity3D and allows the user to fly around and through the brain with a gamepad while seeing real-time live brain activity from someone wearing an EEG cap.

Measuring the Universe : Roman Ondák Viewers play a vital role in the creation of Measuring the Universe (2007), by Slovakian artist Roman Ondák (b. 1966). Over the course of the exhibition, attendants mark Museum visitors' heights, first names, and date of the measurement on the gallery walls. Beginning as an empty white space, over time the gallery gradually accumulates the traces of thousands of people. ROBERT ATKINS.NET Antonio Muntadas and the Media Landscape A catalogue essay and interview Meditating on Art and Life in the Information Age Catalogue essay for Des/Aparicions, Centre d'Art Santa Monica, Barcelona, 1996 Talking about plans for his current Des/Aparitions exhibition, Antoni Muntadas observed that "creating a useful structure is the creative aspect of the work." He was referring both to the production of specific artworks and to the economic exigencies of the life of an artist; or--to put it another way--to the connectedness of art and life. This is the principal subject of my essay. But I also invoke Muntadas's comment because it stimulated my thinking about catalogue-writing itself: its nature and its inherent (ideological) assumptions about the writer's objectivity and the presenting institution's authority, all embodied in a seamless flow of rhetoric.